You Have Been Warned! A Complete Guide to the Road 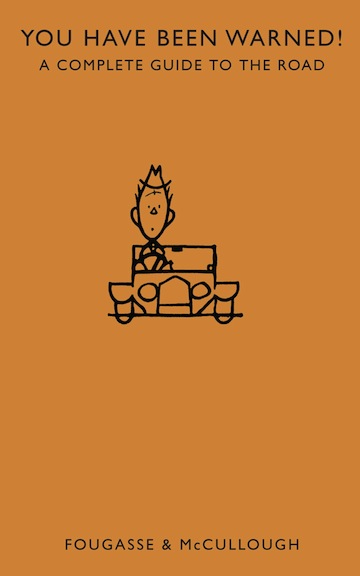 First published in 1935 and re-issued many times since, this popular compilation of “humorous advice for perplexed motorists” takes a light-hearted look at things a budding motorist and innocent bystanders ought to know about each other.

There’s not much to say regarding the contents—except that humor doesn’t travel well! In its day the book must have been hilarious, today it comes across as rather contrived and stilted. Or, it may just be that the novelty of such pronouncements as “Question: Describe the difference between roads made by the Romans and those constructed nowadays. Answer: The roads made by the Romans have lasted until the present time.” has worn a bit.

The writer and the illustrator, though, are worth knowing. William Donald Hamilton McCullough (1901–1978) had come to public notice only a year before this book with a little treatise on the game of contract bridge that had also been a collaboration with illustrator Fougasse (1887–1965), the first of several. 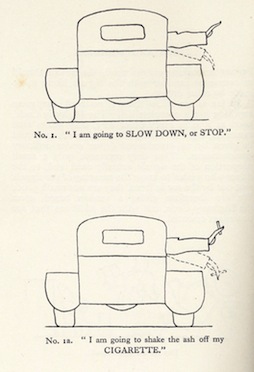 The two men must have had an interesting relationship because Fougasse is said to have pioneered the idea that humor (i.e. the writing or the concept) is more important than art (i.e. the drawing that gives expression to the thought), postulating that “it is really better to have a good idea with a bad drawing than a bad idea with a good drawing.” He had plenty of opportunity to practice what he preached as Art Editor of Punch magazine since 1937 (after first publishing his work there in 1916) and Editor 1949–53, the first cartoonist to be appointed to that position, and also contributed to a number of important other British publications in that vein.

He obviously had a sense of humor because he dropped his given name, Cyril Bird, because another Punch contributor used the pseudonym W. Bird (this was Jack Butler Yeats, fifth child and youngest son of painter John Butler Yeats and brother of poet W. B. Yeats. If you are a Sherlock Holmes aficionado, know that C.B. Yeats did the first cartoon renditions of the iconic detective.) Cyril instead adopted the pen name Fougasse which is a type of French anti-personnel mine because during WW I he had been injured by a shell at Gallipoli in 1915 so badly that he was not expected to survive. Why a landmine? Because when it goes off, in his own words, “its effectiveness is not always reliable and its aim uncertain.” Kind of like humor. 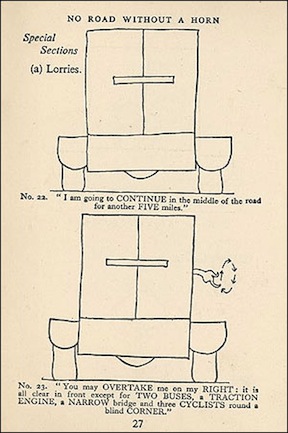 As the examples here show, Bird’s drawings are spare, linear, devoid of ornamentation. Many WW II British propaganda posters flowed from his pen and if you are in the habit of flying first class on British Airways, take a look at the first page of the menu. That cartoon of a butler carrying a tray? Bird’s. He has done work for BA since it was Imperial Airways in the 1930s.

Long story short, not much in this little book is of much practical use today but it’s plenty entertaining.

You Have Been Warned!

A Complete Guide to the Road

Messerschmitt Me 262 A Schwalbe »
« Porsche 356 Defined, A Pictorial Guide