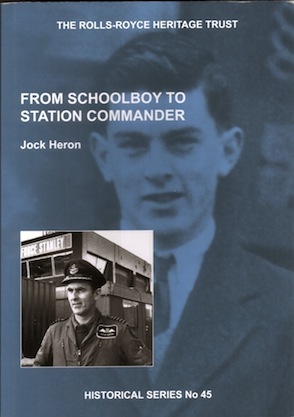 This autobiographical memoir by a career RAF pilot who also worked with and then for aero engine maker Rolls-Royce sheds light on many facets of active-duty flying, engineering/admin, and procurement.

Even before joining Rolls-Royce in 1987 after ending his 32-year military service, Group Commander “Jock” Heron had already flown Rolls-Royce engines from all five of the firm’s main design teams. In fact, so wide-ranging was his experience that Rolls-Royce asked him to prematurely resign from the RAF so as to become their liaison to the Ministry of Defense.

Even after six (of ultimately 11) years with Rolls-Royce he considered his immersion in the company’s culture only “limited” and thus tried, unsuccessfully, to resist an appointment as Chairman of the Rolls-Royce Heritage Trust’s Bristol branch. It is Heron’s wearing of all these hats that here results in an autobiographical memoir of sweeping arc, “in and out of the cockpit with a focus on aircraft, engines and matters associated with them.”

From geopolitics to company politics to the role of the RRHT as the custodian of the storied firm’s industrial heritage, there’s a lot here that makes for rewarding reading. One quote in particular is worth pondering:“‘Heritage’ may not pay company salaries but if companies ignore their heritage they run the risk of diluting their identity, losing their way and being unable to pay any salaries at all.”

This is vol. 45 in the Trust’s Historical Series.