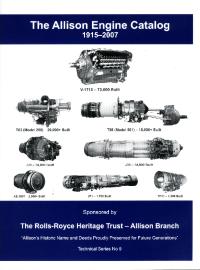 As the title suggests, Allison products are arranged chronologically in catalog style, with each product occupying one page. For readers who enjoy engineering excellence, this book is a must. Outside of its own product line, Allison did contract work for numerous customers including the GM Research Laboratory, US Army, US Navy, and US Department of Energy. Their product range covered engines for airships, fixed- and rotary-wing aircraft, rockets, automobiles, armored vehicles, busses, locomotives, boats, generators, and auxiliary power units. Some were multi-fueled, some burned coal, and one even burned wood and another one was nuclear powered!

When Rolls-Royce PLC (the aero company) acquired Allison in 1995 plans were put in place to form an Indianapolis Branch of the Rolls-Royce Heritage Trust (RRHT) which is the entity charged with documenting and preserving the industrial history of Rolls-Royce (motorcar, aero, commercial engines) and its ancestral companies in the UK and elsewhere. The Allison Branch in Indianapolis has pursued the goal of documenting their rich heritage with the same vigor and enthusiasm as their counterparts in Blighty.

Starting out with the production of Liberty watercooled V12 aircraft engines in World War One, the book progresses through to the modern era. Each engine/product description contains at least one illustration, specs, and an explanation of noteworthy aspects, history, or operating principles. Calling the book an engine catalog is somewhat of a misnomer as Allison developed and produced a myriad of engineering products such as mobile nuclear reactors, Fresnel mirrors, etc. Allison first gained fame with breakthroughs on plain bearing design; in fact the basic theory of the hard-backed steel shell encompassing softer bearing material used universally to this day was one of their many innovations. Gearing was another area of expertise. Propeller reduction gearing, in particular, for high-performance piston engines has proven to be an especially difficult design challenge. Packard, among others, contracted with Allison to assume responsibility for this aspect of their engine design. The Allison V-1710 V12 aircraft engine made famous during World War Two powering aircraft such as the P-39, P-63, P-51A, P-38 plus many other low-production and prototypes is explained in good detail. The doubled-up version of the V-1710 (the first 1,000 hp piston engine to pass a 150-hr type test), the V-3420 is covered along with the many design proposals for various drive configurations and even a doubled-up 3420, the massive 6840 (cubic inches!!). The early gas turbine era is covered with engines such as the J35 (the J35-A-33 was the first afterburning turbojet to enter production), the T40 (the T40-A-14 was the first tail-sitting fighter to take off vertically, fly horizontally, and land vertically) and the amazing T56 (the only aircraft engine to stay in production for over 50 years). Automotive gas turbines represented another area of intense research and development supporting mainly General Motors. By the end of the development phase a specific fuel consumption of 0.33 was achieved which is diesel territory.

This book is probably not the kind one would read cover to cover but the reader can cherry-pick and choose an area of interest and go from there. For readers who have an appreciation of ingenuity, engineering excellence and quality, the entire book is chockfull of wonderful surprises. Due to the enormous number of products put out by Allison only a cursory glance is possible on any one page. However, entire books have been written on some of the more famous products such as the Liberty or the V-1710 engines. But there are many more products that deserve a dedicated book—perhaps some brave soul will venture forth and fill those gaps.

The book intentionally does not cover non-proprietary (such as vehicle transmission and GM diesel engines) and still-classified aerospace products. It also does not list every single variant of a model (such as the V-1710). One glaring shortcoming are the overly brief two pages dedicated to Aeroproducts propellers. And there is no Index, which would have been icing on the cake. Perhaps due to space restraints no illustrations of applications are shown, which would have been a major enhancement. Supplemental materials cover engine designations, details about minor other products or engines that did not warrant full-age coverage in the body of the book, brief details about joint Rolls-Royce/Allison projects, a list of notable Allison achievements, significant Allison names and dates, a very extensive Bibliography, and even a poem by the author.

Probably a surprise to readers outside the engine community is Allison’s experimental work on the PD-37 ramjet and rocket motor cases. While these projects did not lead to production contracts, they did equip the company to build propellant tanks for the Apollo Command/Service and Lunar Excursion Modules.

John Leonard is a third-generation Allison employee and long-time editor of and contributor to the RRHT Allison Branch newsletter. His vast knowledge of Allison products and direct access to the Allison archives have produced a most useful and long overdue book.