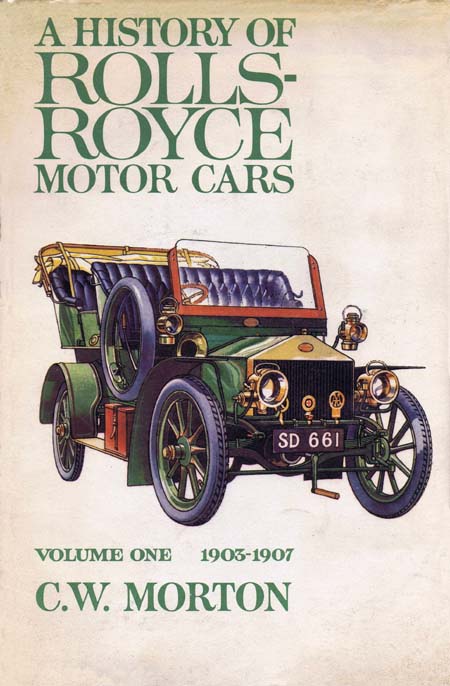 Let’s set the stage. In the Forword to this book, famed early Rolls-Royce collector and restorer Stanley E. Sears states: “THIS book had to be written and no one is more qualified to do so than C.W. Morton, who has spent half a lifetime in the service of the Company.” The depth, strength and fidelity of the “had to be written” part of that statement will rest with the dept, strength and fidelity of the reader’s interest in the subject covered: namely the first four years of Rolls-Royce as a maker of motorcars and of the actual motorcars produced.

Indeed, Morton was uniquely positioned to write this book, having started with Rolls-Royce in June of 1924. By 1964 when the book was published, Morton had had relationships with many of those employees that were there in the earliest days of the company and were still working there when he started, as well as unprecedented direct access to the records of the company.

Originally, this was meant to be the first of a three-volume series but, alas, Volume One remained the only one published. (There was a draft manuscript produced for a second volume but it was never completed and published. Ernie Wooler, who joined the company at age fifteen in 1903, lived long enough to obtain a copy of Volume One and wrote notes into the margins, mostly anecdotes and recollections, thereby making his annotated copy a possible basis for a new edition.) Morton’s book is divided into seven parts and thirty-six chapters. Parts one and two introduce us to the two R’s behind the company, Frederick Henry Royce and the Honorable Charles Stewart Rolls. The remaining five parts track the genesis of the relationship between these two men along with the events and other people who were involved from the beginning, as well as each model of motorcar produced under the Rolls-Royce name in those first few years: a two-cylinder 10 hp, a three-cylinder 15 hp, a four-cylinder 20 hp, a six-cylinder 30 hp, a twenty-horsepower V8 and, finally, the 40/50 horsepower six-cylinder “Silver Ghost” model that was ultimately adopted as the sole model the company would produce for many years thereafter, to the exclusion of those first models, soon earning the firm accolades as makers of “the best car in the world.”

Each chapter starts with an outline-style overview, giving the reader a solid view of the content about to be covered. (If one were to combine all these overviews one would surely have a concise mini-history of the company.) The table of contents is followed by a helpful “List of Illustrations” that lists all 173 by section and chapter. All through the book, these pictures are well presented and many rarely appear anywhere else, particularly those of the V8 model of which not a single actual car exist. There is also a List of Figures that enumerates the engineering drawings. The hardcover book utilizes a 6 x 9˝ format with 424 pages ending with a full index.

The “sweet spot” of this work is the level of detail in which each of the aforementioned models is presented, down to a list with details of each car produced (only about nine dozen cars in total over those first years before and up to the Silver Ghost). This is where it is clear that this book is meant to satisfy the scholar and the ardent enthusiast, but its presentation and easy prose are so engaging that it is easy enough to imagine the casual reader becoming a marque enthusiast upon reading it. Delving into the who, what, where and how a small shop on Cooke Street in Manchester came to produce what would become known as “the best car in the world,” the book tells a lively story of tenacity and circumstance and the stubborn pursuit of peerless excellence.

The fact that only one example of the three-cylinder and the 30 hp six-cylinder survives to our time, and none of the V8s, makes the details Morton presents historically important. Royce’s 1905 V8 was the first such engine conceived for a production passenger car, a fact based on now-incontrovertible evidence but that has eluded automotive historians for decades.

The entire work is not a cold presentation of dates, goals and accomplishments—Morton tells a story. Given his years of association with the firm, his account could easily have been confined to the mere factual but Morton goes beyond that, combining it with company “lore” and anecdotal bits to arrive at informed speculation. The challenge to the reader is to separate fact from conjecture. When Morton offers an opinion, he is careful that it is conspicuous, for example (from page 266): “If the dropping of the Light 20 brought sadness to Rolls, the decease of the Vee-8 must have given to Royce an even greater pang of regret, for it is abundantly clear that to this engine R had given of his best. It could well have created a new tradition for, until the mid-1930s, it was a neglected layout and it was left to Ford to realize what Royce had realized thirty years before, that the Vee-8 could be a compact, sound and robust unit, holding out great possibilities for future development.”

There have been many books on Rolls-Royce that address its early history but none are as detailed and comprehensive as this. As a result, this work has served as the core for other authoritative works, such as, and quite notably, The Edwardian Rolls-Royce (Fasal and Goodman, 1994) with its superlative pre-Silver Ghost section by Tom Clarke, which advanced Morton’s work to incorporate the occasional correction and the incremental new discoveries that happily come from time to time.

To come full circle: did the book, as Stanley Sears proclaimed, “have to be written”? This reader believes so: it is an authoritative work from an authoritative source. Read it too and answer the question for yourself.

A History of Rolls-Royce Motor Cars