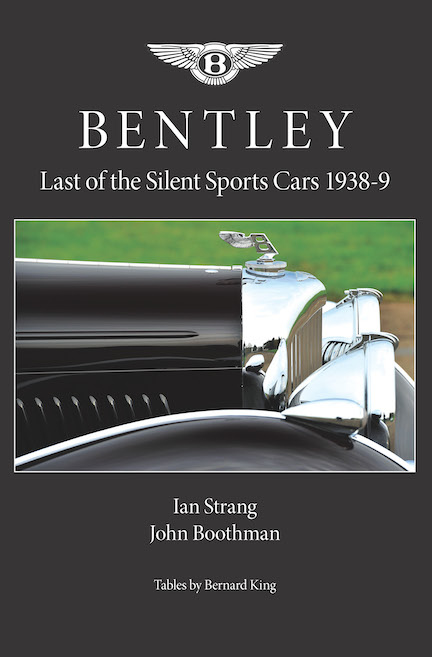 “From the company’s point of view, however, it was not all plain sailing. Perhaps it was fortunate that pre-war motoring magazines knew which side their bread was buttered. Comparative road tests, which would have been bound to antagonise one influential maker or another, lay far in the future, while published criticisms, especially of expensive marques, were muted. Potential buyers trying to assess the strengths and weaknesses of competing models had to read between the lines.”

No reading between the lines in this book: the overdrive Derby Bentleys are the cat’s meow, the bees’ knees, all around hot stuff, “the best of the Derby Bentleys that can be bought.”

To anyone considering the acquisition of this delectable model of Bentley, this well-rounded book will be a siren call inasmuch as it describes each chassis built (there are only 200, or depending on how you think about it, 201) along with a good amount of back story and context so as to appreciate this model’s virtues in period as well as over time: as recent as 2008 a road test praised it as “flattering, not challenging its owner.” It really cannot be overstated how eminently usable this vintage car is even still today in modern traffic, and this book goes a long way to establishing how, in period, it pretty well owned, if not actually established, that sweet spot in the market place where creature comforts, technical features, size, and price converged. The latter is described as “high but not stratospheric,” an important factor back in its day when “the patrician lifestyle”—which in an automobile context means £1000+ cars, then as now easily the cost of a house—was getting out of step with the “era of soup kitchens and dole queues.” 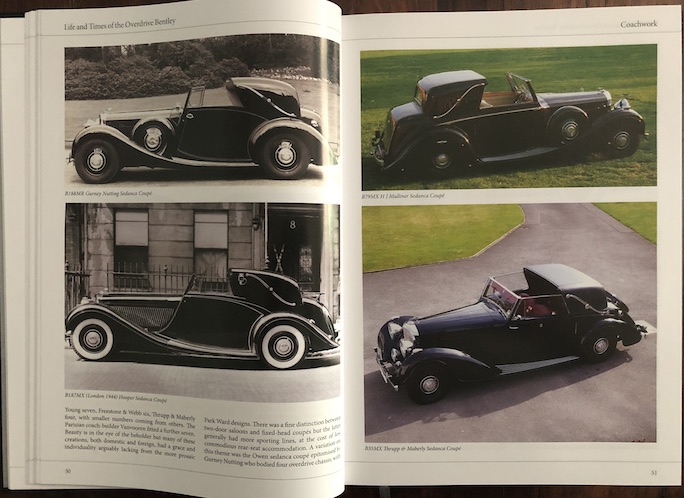 If you’ve been around vintage Bentleys you know a book by this title already: indeed its first edition came out a quarter century ago, in 1994, but that version was rather less fully rounded. Its focus on only a chassis by chassis review was more of a catalog than an integrated treatment of individual models in relation to each other, to other types of Bentleys, let alone other marques. Almost never does one book deliver everything, and as long-time enthusiasts and owners and marque/model experts authors Strang and Boothman are fully cognizant of what all exists already and how their book expands the envelope. Both editions feature strong complements of both period and later photos and it is puzzling to observe that some of the newer photos, especially color ones, seem to not have received the sort of digital ministrations that would have enhanced contrast and detail. 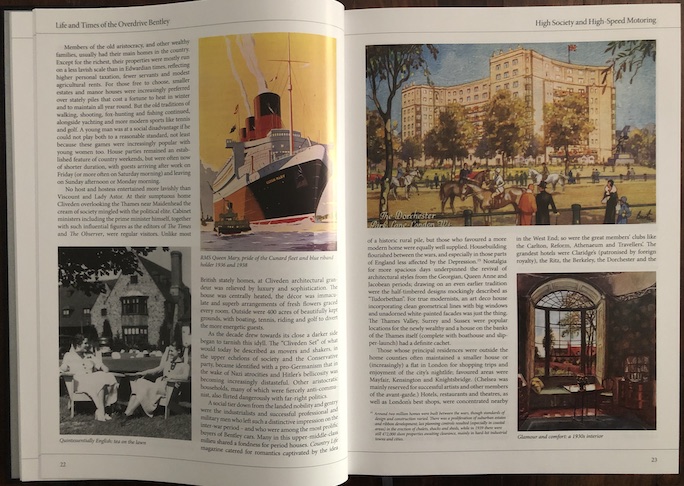 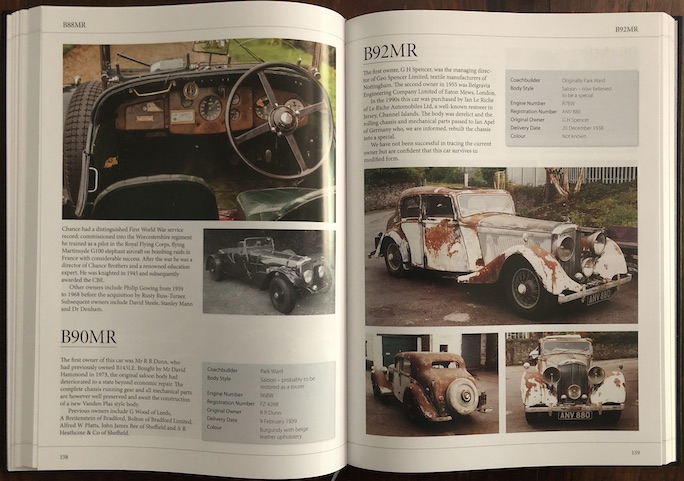 As one would expect, quite a bit of detail has come to light in a quarter century and it is integrated here. Certainly the market for the overdrive cars which always already commanded a premium, has moved up further. That these cars of the MR and MX series, despite their plentiful and undeniable improvements, would end up having a short production life of really only several months, is an oddity and this book does a fine job explaining the impact of the Depression and the gathering clouds of war but also the lifestyles and habits (i.e. vacations involving road travel, owner- v chauffeur-driven, family size etc.) of the people who could afford this sort of car.

The reader new to vintage motoring will appreciate the discussion of how the engineering of British cars—gearing, engine revs—was influenced by British roads—winding, hilly—which gave Continental not to mention American cars an edge over Bentley. The entire first chapter is devoted to this topic and develops good detail regarding the pros and cons of competing makes. All of this is still relevant to today’s buyer, and even just the armchair enthusiast will glean useful data points and practical advice here.

Chapter 2 deals with “Company Publications and Press Reports” and here you find often full-length reprints of road tests and the like. The prose of these missives is uniquely florid and erudite and a joy to read, especially out loud! 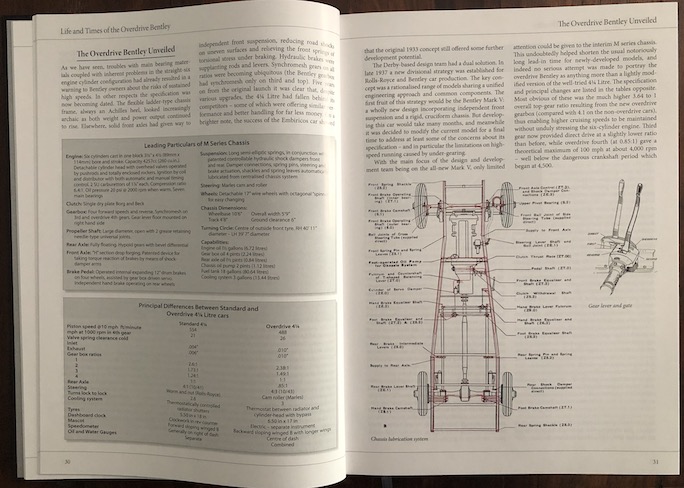 Chapter 3 consists of the aforementioned chassis by chassis review (in ascending order by chassis number), augmented by a uniform data table and offering ownership and usage history. Most of these entries include photos, often of the snapshot variety (meaning less than ideal photo angles; also, most are not captioned), and the occasional coachwork or technical drawing.

The core message of Chapter 4 is that owners blessed with the custody of these fine machines ought to “put something back into the hobby” and so features four stories of particular cars being brought back to life, not least the rather epic reconstruction of the famous Corniche prototype (below)—whose infamous loss during WWII is a story that every serious Bentley acolyte is able (or had better be able!) to recount by chapter and verse. 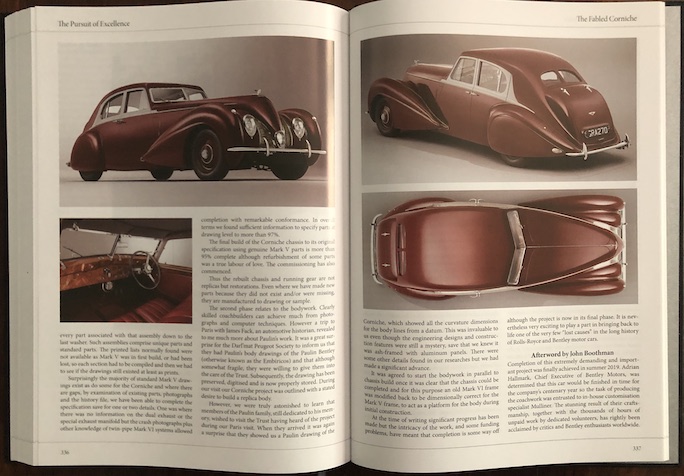 Appended are the absolutely essential lists and tables of chassis details (below), crossreferenced to UK registration numbers, tended to by that King of Listmakers, Bernard King who has and is publishing entire books of such data for each model of Bentley (and Rolls-Royce). 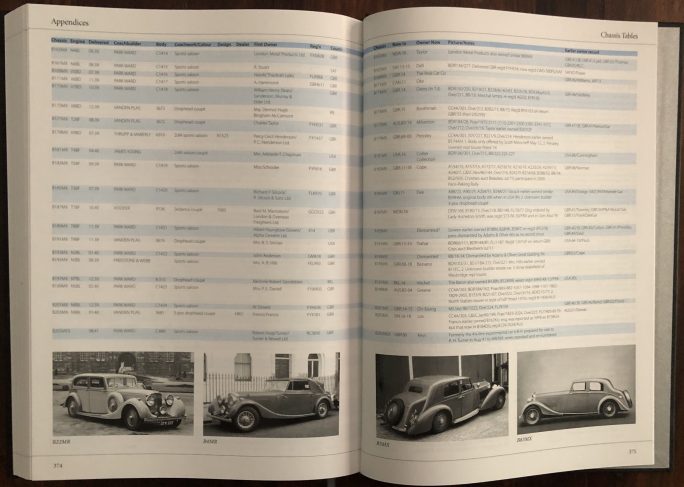 The number of surviving overdrive Derby Bentleys, some 87%, speaks to their enduring appeal and this book really does do them justice. Don’t let the unduly high shipping fees deter you, they are a Covid-19 byproduct! Also don’t let the fact that the book is self-published deter you; it is a professional-looking product in every regard and has high production values.

The Human Archaeology of Space »
« A Postcard History of Japanese Aviation: 1910–1945