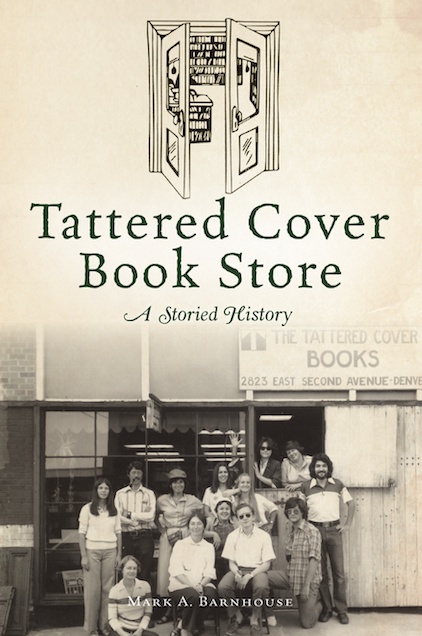 Bookstores are mystical, magical, wonderful places and, lest you doubt the truth of this, I invite you to spend an evening as I recently did reading and looking at the images on the pages of Tattered Cover Book Store, A Storied History. Reading and looking at it sent my mind wandering the globe to visit again—in memory this time—some other great book emporiums serving readers. In doing so, some interesting parallels and commonalities revealed themselves.

There are great bookstores located the globe over. Concentrating the focus mainly on English-speaking lands brought one to mind although few would suggest Paris, France is an English-speaking country. But then neither would any mistake the Bard for a Parisian. Yet Paris is precisely where America-born New- Jersey-ite Sylvia Beach, who while still in her early 20s became a Paris resident by choice, established her salon and shop with its community of writers in 1919 calling it Shakespeare and Company. It was only the Nazi occupation of Paris that forced her to close and lock the doors in 1941’s concluding month.

Shakespeare and Company bookstore of today records its opening to a decade later. When it first opened for business in 1951, its owner, an American named George Whitman, no relation to poet Walt although his father was named Walter but was a physics professor, called it Le Mistral. It wasn’t long before he renamed it Shakespeare and Company purposely to honor the by then late Sylvia Beach.

Therein was the first surprise for in the US, Southern California to be exact and Burbank to be specific, that 1951 year was when Harry Morrow opened the door of the bookstore he named Autobooks. Those familiar with the shop know that its name has expanded a tad to Autobooks-Aerobooks and that it is still very much alive/well in business today and still in Burbank! 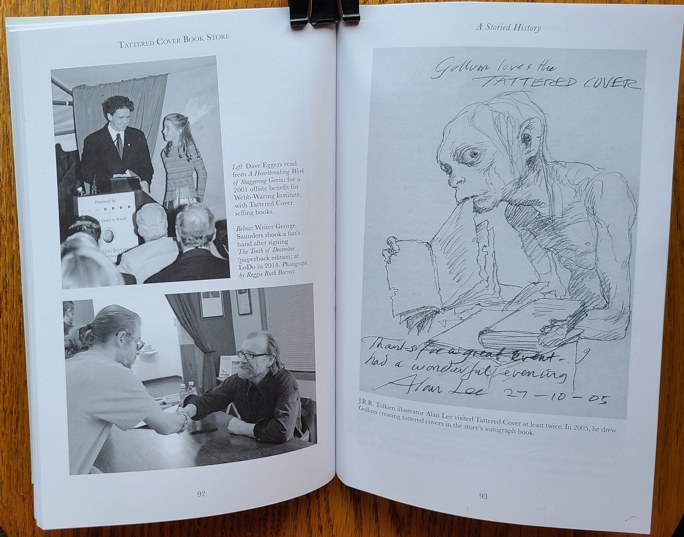 Images from memorable author visits: at top left Dave Eggers reads from A Heartbreaking Work of Staggering Genius and bottom left is George Saunders shaking a fan’s hand after autographing his The Tenth of December. Right hand page is J.R.R. Tolkien illustrator Alan Lee’s drawn signature in the store’s autograph book. You, of course, recognize Gollum “tattering a cover”.

Stephen Cogil opened Tattered Cover, the subject of this book, in Denver in 1971, selling it three years later to Joyce Meskis who would be the one to “put it on the map” so to speak. That same year, another now well-known (dare I say famed) store opened in Portland, Oregon and as with Tattered Cover, Powell’s City of Books is still enjoying a healthy, thriving business to this day.

There are two other West Coast destination bookstores. One, called City Lights, is in San Francisco. It opened in 1953 and, as with the eclectic city in which it is located, is much storied. The other is situated in a smaller, but no less eclectic, community known as Ojai located up the coast from the greater Los Angeles area in what is referred to as the Gold Coast portion of the Golden State. Ojai is more or less equidistant, but inland, from Ventura and Santa Barbara. Bart’s Books was established in 1964 and welcomes and charms first-time visitors and regulars to this day. 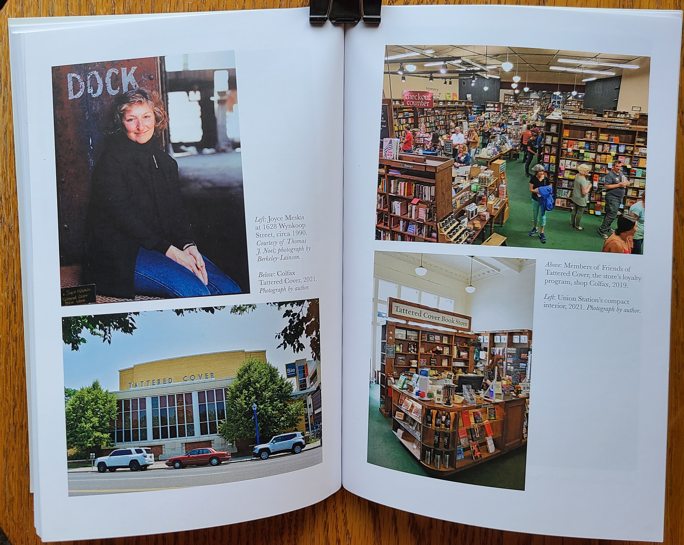 Top left is Joyce Meskis, the lady who brilliantly directed the stores operation from 1976 until retiring in 2017. Bottom left is exterior of current location and on facing pages views of interior.

One more special place bears mention. It’s the “new kid on the block” having first opened in 1988 and today a must-visit place for the automotively oriented. It is located right in the heart of where each year’s Dream Cruise takes place on Detroit’s Woodward Avenue. Called simply Pasteiner’s, borrowing the surname of its retired GM designer-founder, today his son, daughter-in-law, and grandson welcome visitors and customers.

But what of this Denver, Colorado Tattered Cover store and the book about this half-a-century old establishment? It’s written by Denver native and historian Mark A. Barnhouse and is his 8th book. In it he shows and tells of the ups/downs and the challenges faced and overcome in order for Tattered to remain vibrant and current for (now) over 50 years.

Readers meet and see the cadre of loyal book readers/shoppers who have volunteered to pack and move, and then unpack and reshelve the boxes and boxes—and still more boxes—of books each time the need arose to relocate the store. Even the author is one of those and, as he shows us on the next to last page of his book, being part of the Tattered Cover staff 1994 to 2000 kept him fed and housed—meaning he knows the bookstore from the outside in and the inside out. 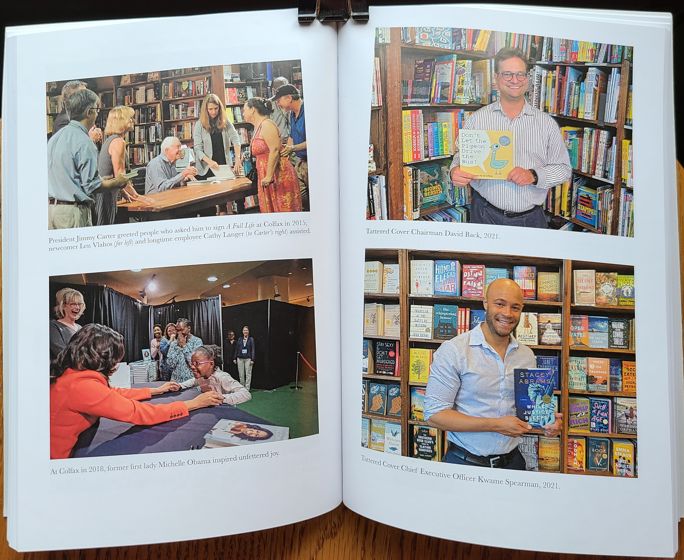 Readers also hear and see proprietress Meskis’ philosophy behind the organization and presentation of books as well as her firm beliefs-turned-into-action for integrating with and serving the community. Meskis retired in 2017 so Barnhouse also introduces us to the current owner/caretakers. And then there are some of the wonderful stories surrounding author visits and book signings.

Just as the Tattered Cover bookstore welcomes all who enter, so too do the pages of this book telling its story.

bibliography and index of authors