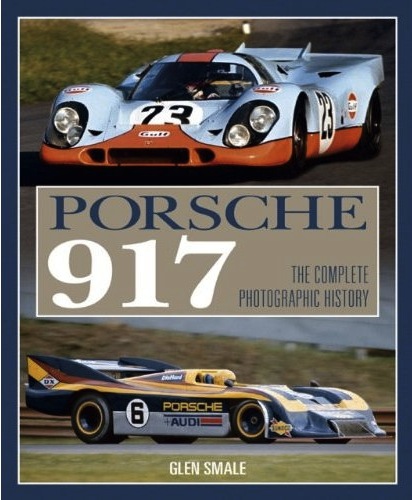 “I could have been a contender!” Words to that effect were surely muttered in Porsche’s boardroom in 1968 when their cars, successful as they were in other types of motorsports, simply didn’t have the legs to be competitive in long-distance endurance racing. Derived from the 908 model—which had been unable to claim the Le Mans crown—the 917 made Porsche not only a contender but in its short competition life gave the company 15 World Sportscar Championship wins including two at Le Mans. Some of the records it set stand to this day. It even acquitted itself well in North American Can-Am sprint racing. Terrorizing the competition and—at least the early models—its own drivers, the “Porsche Panzer” that had been conceived because of an FIA rule change became too successful for its own good and ended up being done in by one.

Smale tells a fully fleshed out story of the 917 development and racing history within the whole context of Porsche racing history. The subtitle says it all. The book is complete inasmuch as it omits nothing of importance and photographic in that it tells its story through extensively captioned photos. Do not think for a moment that the ratio of photos to text implies this book is a lightweight or superficial or just eye candy! (It is also not a lightweight in physical terms!)

If there was such a thing as truly only being able to have just one single book on the subject, this one deserves serious consideration! Following a very detailed Table of Contents and a Foreword by Derek Bell who drove the 917 in 1970 (but is shown here in 2008 in full Bentley garb), the book lays the groundwork with some 60 pages devoted to Porsche’s early racing history, the FIA rule changes prior to the 917 that both hindered and then helped Porsche, and 917 design and testing. All this is profusely illustrated with photos that have very thorough captions and many of which have not been seen before. (If the well hasn’t gone dry even 30 and 40 years after covering seemingly every angle of the subject one can only wonder what treasures might still be lurking in some old archive!) Most commendably, all photos list photo credits and, as applicable, even state the cars’ serial numbers. They are very well reproduced, many taking up a full page.

It may be worth pointing out that this book shows, as do others, the remarkable chart of the production schedule but here it is in color, much more legible.

The bulk of the book presents the racing history, divided by year and series, interwoven with the concurrent development work. Focusing on the 1969–1972 period, it covers all of the six 917 variants—with references to the 917 predecessors 904, 906, 910, 907, 908. It also tells in good detail of the Can-Am and European Interserie races and ends with the 1981 Le Mans appearance of the 917 K81, the one-off built by the Kremer brothers from original Porsche drawings and using many old 917 parts. The book also shows several race posters, and sidebars contain lists of race venues, reminiscences, press clippings, etc. Five pages are devoted to the Steve McQueen movie Le Mans. A short bibliography and two indeces (one of people, one of events) round out the book.

If you have never seen—and heard—a 917 in the flesh, at least check out the 1971 movie Le Mans in which Steve McQueen races a Gulf-liveried 917 short-tail. (You can’t really count the other movie in which a 917 has a prominent role: Herbie Goes to Monte Carlo. That’s merely a replica “Laser 917” on a VW Beetle chassis.)

Enrico Nardi, A Fast Life »
« The Art of the Engineer