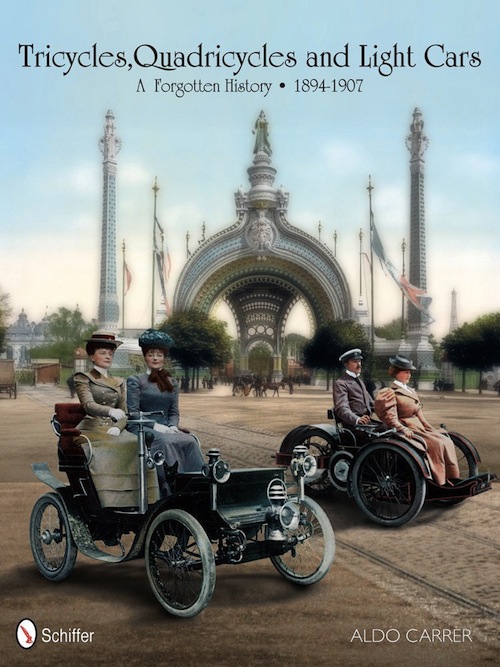 (English, Italian, German) Take one look at the fantastic cover illustration and you’ll be itching to hit the <order> button, all the more so if you know Italian author Aldo Carrer’s previous work on vintage machinery (cf. The Dawn of the Motorcycle, The Photographic History from  1894 to 1906) and fashions (cf. The Woman, The Motorcycle, and the Women’s Fashion Trends from 1894–1945). He’s been a motorcyclist since his youth (b. 1953) and has collected and restored bikes for many years. Mostly to satisfy his own curiosity he has dug into the history of the earliest days of motorization and over time built up a vast collection of ephemera. The hundreds of illustrations from his own archive presented here are probably new to all but the very serious collectors and depict a vast number of machines (steam, electric, gasoline), locations, and cultural/social reference points.

But . . . aside from the lovely photos—and their very well executed reproduction in a 9 x 12″ oversize and very appealingly presented book—there’s little else to commend this item. Save for a Foreword by Mauro Pasotti, there is no text other than photo captions (not even an explanation who he is, so we’ll tell you: the Presidente della Commissione Tecnica Nazionale Moto dell’Automotoclub Storico Italiano). One is tempted to add the word “thankfully” to that sentence because even what few words there are manage to disappoint. At least there’s not much to get wrong in captions that confine themselves to, say, “A French town with an appealing hotel.” Almost never a date, location, details.

Still, even without that, the illustrations—ranging from private photos to postcards, brochures, advertisements, and even a two-page facsimile of an Italian newspaper article about a tricycle race (no date even here)—are strong. The general-interest reader will find them evocative of a time all too difficult to conjure up in one’s mind’s eye.

It is commendable for an author writing in a “minor” language to go to the trouble to engage a wider audience by offering translations. But it would help if the translations at least accurately captured the source language. This is not often the case here but at least in one instance (p. 119), the English version is better than the original because it cross-references another page (162) on which related material is shown whereas both the Italian and the German versions don’t. But most of the time, the translations make things worse. There’s almost no page without an example of this; let’s pick [on] p. 104/5. Here is shown a splendid two-page photo of two vehicles on a narrow road (probably a bridge, judging by the embankment and the elevation relative to the background)—and in the foreground are horse (cow?) droppings.

What the Italian caption is trying to convey is perfectly simple: the road is shared with animals, and evidence of their presence is captured in this photo.

So, what is one to make of this? The book is not cheap but the photos are large and pretty and plentiful—and, truly a plus, show things you probably haven’t seen yet. No Index. Or Table of Contents. Only the technically astute will be able to spot the myriad of fascinating construction details unaided. Nice enough but could have been much more.

Posted Under: Motorcycles, Photography | Author: Sabu Advani | No comments yet