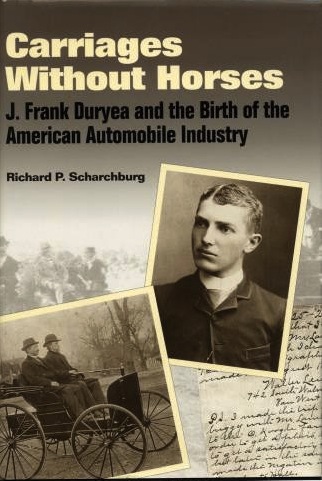 J. Frank Duryea and the Birth of the American Automobile Industry

This small hardcover history book focuses on which of the Duryea brothers, Charles or Frank, contributed the most to the design and construction of the first US car put into series production. Charles always claimed credit for the design of the car, thanking his younger brother Frank for being “his indispensable helper.” In actual fact, as this well-annotated book points out, while Charles did provide the initial arm-waving hyperbole necessary to raise the money from smalltime investors, the quiet brother Frank, after working through all his brother’s ill-conceived and slightly crackpot engine and drive train design concepts, methodically redesigned the prototype into a completely different and viable automobile.

Well written and carefully researched, the book untangles the conflicting claims and by properly supporting its findings amounts to a most valuable housecleaning. Layers of detail are added in the form of great period photos, good mechanical descriptions, and an interesting financial history outlining the ups and downs of raising the initial development capital to construct the prototype, followed by attempts to interest major east coast financiers in building a factory. Partners get cut out, bought out, and generally abused behind the scenes as Frank continues to build and modify, build and modify, until his successful vehicle wins the bitter wintertime Chicago race. Immediately after the grueling 10-hour, 92-mile cross-country race, Frank collapsed into bed while a well-rested Charles “regaled reporters with accounts of his design and construction of the winning automobile.” This misinformation is printed the following morning in newspapers, then in trade publications and magazines worldwide, becoming the accepted view of Charles Duryea’s design genius and pivotal role in the mechanical development of America’s first car. The rift between the brothers over Charles’ claims became deeper as the years passed and was described by Frank as “a family feud—without the violence—rivaling the legendary Hatfields and McCoys.”

Professor Scharchburg, a widely recognized industrial and automotive historian, searched through the records to find original period letters between the brothers and other primary information on the development of the Duryeas’ first car. Much to Scharchburg’s and our enlightenment, his search results in conclusive proof as to who deserves the credit for making the dream of a lightweight gas engine-powered “horseless carriage” a reality. Between the lines we see the psychological interplay between the brothers, with the older Charles initially dominating his younger brother Frank. For years afterward Charles loudly promoted failure after failure in the bicycle and auto manufacturing field, while Frank quietly went on to found the well-respected and financially successful Stevens-Duryea automobile company in 1901.

Scharchburg died (June 2000) just as he was about to retire from teaching industrial history at Kettering University. It is worth noting that in September that year Kettering’s Scharchburg Archives were renamed after him in recognition of his creating and then directing the Kettering/GMI Alumni Foundation Collection of Industrial History aka the “Flint Archive.” Though housed in the former General Motors Institute of Technology, Scharchburg always took exception to the notion that it is GM’s “unofficial archive” or solely focused on that firm’s industrial heritage.

This book begins with a Preface followed by twelve chapters covering early automotive history in general, the background of the Duryea family, the development phases of the first car, why that car failed commercially, then chapters on Charles and Frank Duryea’s subsequent separate commercial adventures and their successes. An Epilogue and 16-page Index finish things off.

Won the 1993 Thomas McKean Memorial Cup of the Antique Automobile Club of America and the 1994 Society of Automotive Historians’ Cugnotaward.