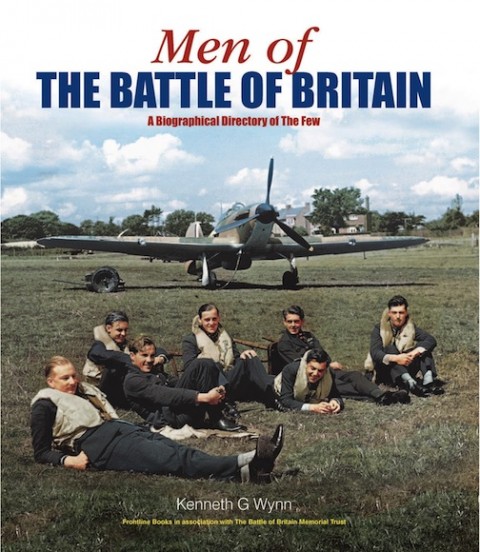 “There is continuing discussion as to whether certain men on the Battle of Britain Roll should in fact be on it at all.

In the light of documentary evidence, principally from The National Archives, I have omitted some men that have been included in previous books of mine.

In other cases, where inclusion is questionable, I have left the men concerned, on the basis of their long-time acceptance by the Battle of Britain Fighter Association.”

Short though it was, the Battle of Britain, the first major campaign to be fought entirely by air forces, decisively affected the outcome of WW II—even if the two sides don’t quite agree on the dates: the Brits count July–October 1940, the Germans July 1940 to June 1941.

“Look it up in ‘Wynn’!”—that’s what people who need to check something, anything about RAF aircrew in the BoB say since 1989 when this epic biographical encyclopedia first came out. That a revised and expanded edition should be published during this 75th anniversary year is not at all a surprise and very welcome because it’s been 15 years since the last overhaul.

Each edition gets bigger, thanks to new data and additional photos of the men coming to light, and also corrects misspellings and such. This third edition is a whole third larger, with the changes occurring mainly in existing entries. But, as the introductory quote alludes to, the entries themselves are subject to review because while there is a known, fixed number of combatants who were declared eligible to receive the Battle of Britain Clasp to add to their 1939–1945 Star campaign medal there are some loose ends mainly relating to what Wynn (a new Zealander, incidentally) calls the “weekend flyers” that augmented the RAF career airmen of whom exist the usual military records. These are, for instance, the Auxiliary Air Force, the RAF Volunteer Reserve, University Air Squadrons, and also crew from other services such as the Fleet Air Arm. The minimum requirement is to have flown at least one operational sortie, a determination based on a squadron’s Operations Record Book—and there are known cases of shoddy record keeping so in these situations Wynn will follow his own judgment or precedent. This edition is adding to the record several names that have never before been on the BoB Roll.

The photos are uniformly headshots, mostly photos and in some cases artist’s renderings and are all reproduced in b/w Some 300 have been added in this book.

Another new wrinkle since the last edition is that the new one is published in association with the Battle of Britain Memorial Trust after the Trust was able to acquire all rights to the work in 2010 thanks to an anonymous donation,

To people to whom all this is new it should probably be said that once you start randomly reading a snippet here and there you may be unable to put the book down. The human dimension will draw you in; just look at the cover photo: a bunch of freckle-faced young men, ready to mount their steed and ride into battle, The Few, of whom their Prime Minister said in his immortal words “Never in the field of human conflict was so much owed by so many to so few.”

Rise Of The Robots, Technology and the Threat of a Jobless Future »
« Paint Locker Magic: A History of Naval Aviation Special Markings and Artwork