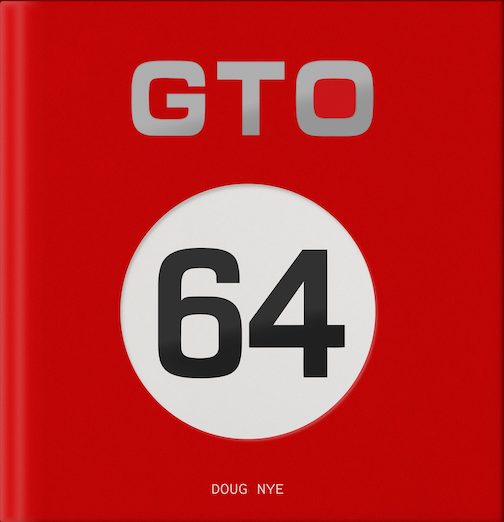 “In producing this account, I have tried to paint in relevant detail the preceding history of the Ferrari marque, and particularly its role in endurance and Gran Tourismo class design, manufacture and competition. The personalities, capabilities and in many cases the reminiscences of Ferrari’s most significant personnel and co-manufacturing associates is also presented. Our objective here has been to provide a background to the sporting, industrial, technical, political and social environment into which the GTO/64s were introduced in that heyday of GT World Championship competition, and most particularly to give due credit—in at least one case for the first time—to some of the artisans involved in the creation of these mechanical masterpieces.”

Well, who needs a review when you could simply quote an excerpt like that?

For serious readers of serious books Nye’s byline is really all they need to know to be confident they have a reliable guide. That £320 asking price (for the standard edition incl. shipping; £290 in the UK) may require some more . . . persuasion, or at least explanation. 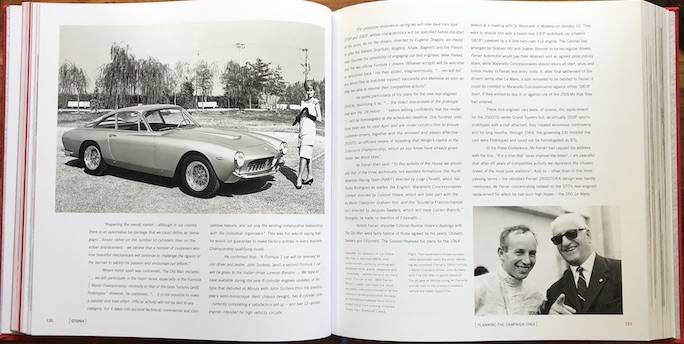 Introduced in 1962 the GTO was the final and best iteration of Ferrari’s long-running 250 GT series. It looked great, won plenty, and was supremely drivable on track and road. Today the Ferrari 250 family is iconic in extremis, with some models fetching in the eight figures. No wonder then that much has been written about the model already.

Writers make choices. Writers who are also readers—and not every writer is, counterintuitive as that seems—make better choices. Doug Nye has been a reader of motoring books since he was ten and over the last 50-odd years has written more than 70, meaning his massive GTO book should tick all the boxes in the categories that matter to readers who look for more than eye candy (research, organization, apparatus etc.). It does, and it is also graced with lively, fully rounded prose that draws you in no matter how much—or little—you know or care about seven cars from half a century ago. 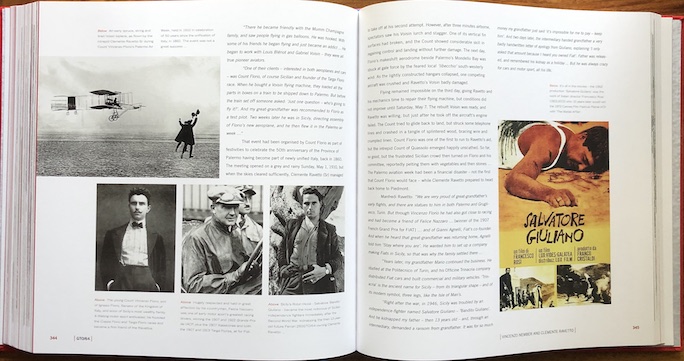 What does any of this have to do with the GTO? It’s an example of an author painting the Big Picture. After all, he’s got over 450 pages to play with.

To illustrate that last point, quoting the very first few lines of this book are apropos because they showcase Nye’s unhurried pace, aided and abetted by a publisher who refrained from penny-pinching strictures (in fact, the book budget was upped part-way through):

“In the third week of March, 1962, in a downmarket hotel at Sebring, Florida, Phil Hill—then Ferrari’s reigning World Champion Driver—was even more uptight than usual. Discussing the situation with his long-term team-mate and frequent sports car co-driver, Olivier Gendebien, just seemed to confirm the unpalatable situation confronting them. To be chewing his lip, worrying, bothered, to have a lightning storm of thought and doubts blitzing though his mind, was nothing unusual for . . .”

Even an archly nonfiction “just the facts, ma’am” book should, if the writer has the chops, play at that level. In no small measure, this is an essential part of the appeal of this book. 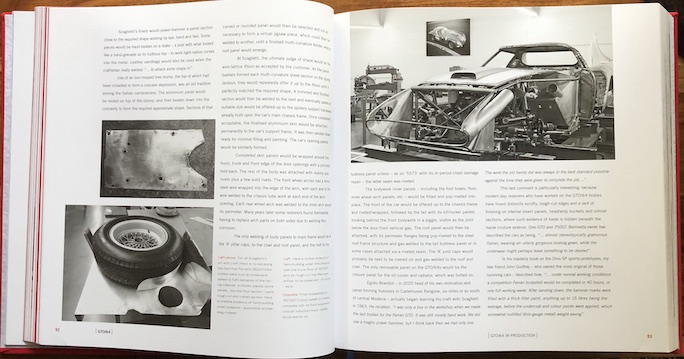 Examples of “hand-building under time pressure.” Notice the rough metal work on the parts on the left. 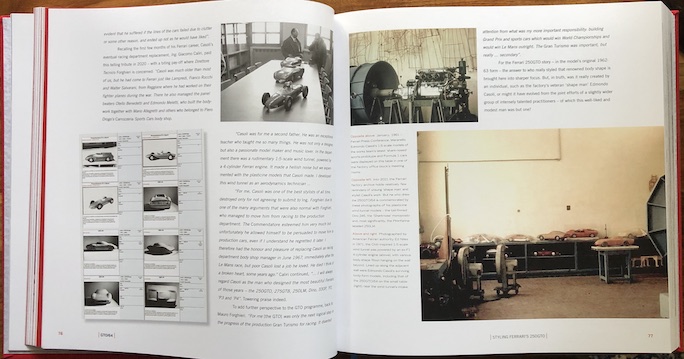 Top left/bottom right: those 1/5 scale models alone would be worth a fortune today.

Given Nye’s immersion into books and cars—he also acts as consultant to events, auctions and institutions; is a presence in various broadcast venues; and runs The GP Library collection of racing photography—he would have been the first to say that the world would not be materially improved by yet another book about this already excessively documented Ferrari. He held fast to that thought, even when someone, a GTO/64 owner acting in conjunction with two others, proposed in 2017 to fund/subsidize a book project about their three cars, and, heck, why not include the four Series I cars of that final year of production too. Nye declined, for years. At this point it is useful to recall that, prior to that solicitation, Nye had just written, in 2015, a book about 250GT #2119. Incidentally, it is not at all uncommon for well-heeled owners of important cars to commission private books that never enter the public sphere so kudos to those three GTO owners—and a sympathetic publisher!—for thinking big. 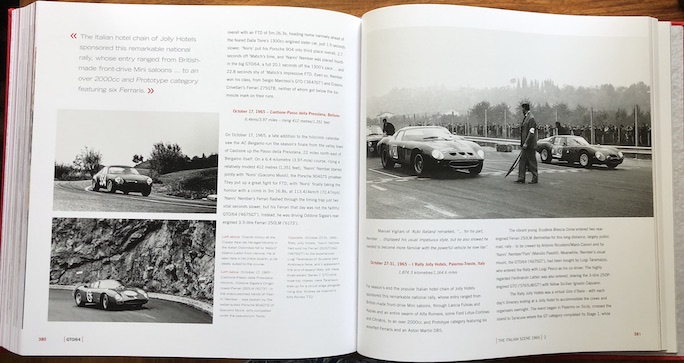 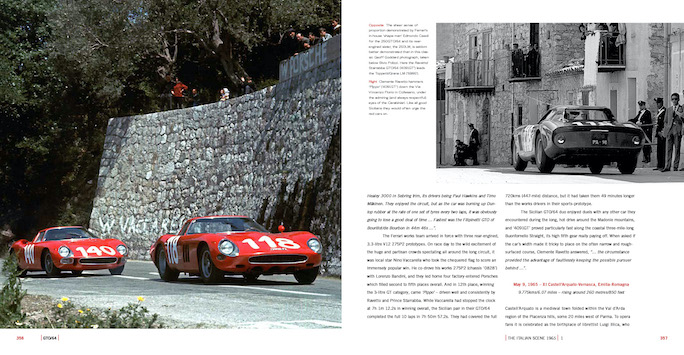 Another useful item to consider: Nye has multiple projects in the works at any one time; the pace at which they progress, and possibly overtake one another, is dependent on the rate at which intelligence comes to light that moves the needle. There did come a moment when critical mass of “absorbingly fresh detail” was reached about the 1964 cars and Nye outlined a possible book that would usefully advance the body of knowledge by:

So, if you can already quote chapter and verse of the entire body of 250GT literature, these are the primary new bits you won’t find elsewhere. If this level of minutia does not speak to your needs, you still have one competent, exceedingly well thought out, and eminently pleasing book that embeds the specific 1964 story into a summary of the wider context of the preceding years, the overall racing scene (regulations and such), technical attributes, and people in and around the design and build. 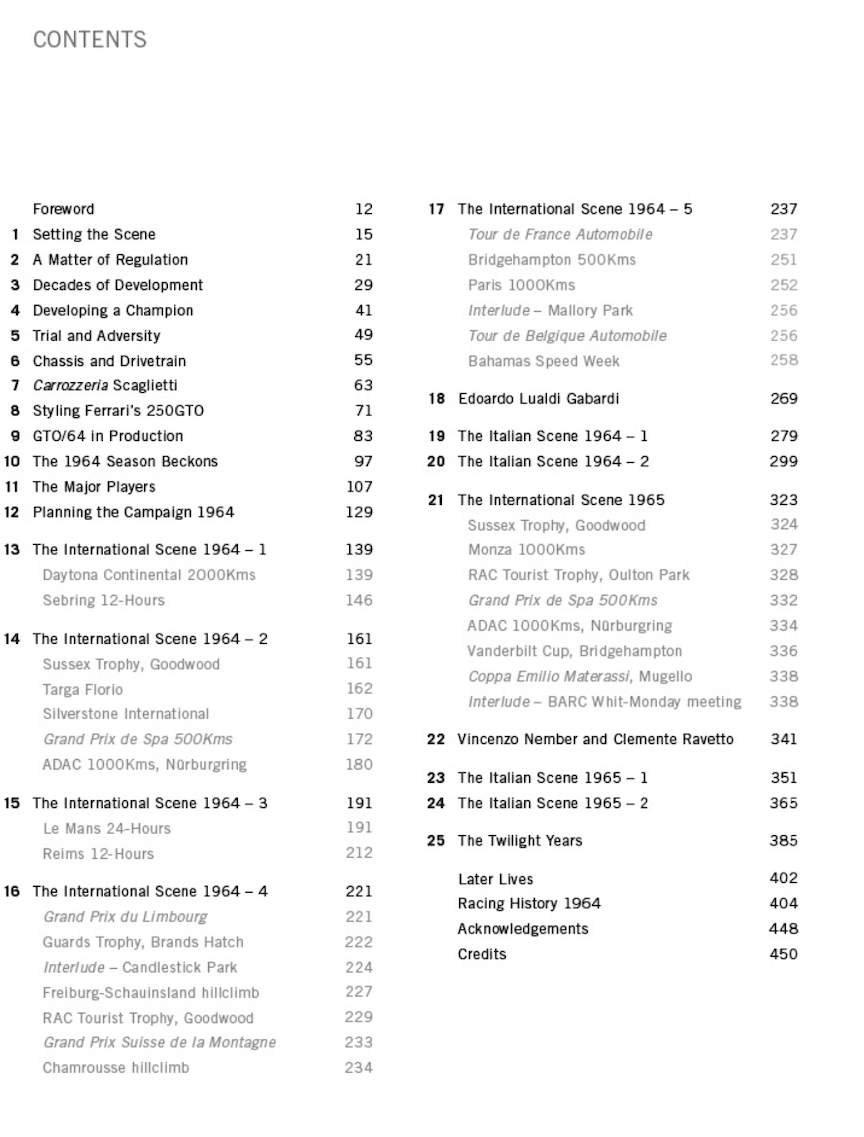 The illustrations are plentiful (period pics, technical drawings [including a lovely Tony Matthews cutaway of #3757], modern photos)—how many of them are entirely new to the record is not a useful metric because each book needs to tell its own story as self-contained as possible, meaning repetition of “standard” material is unavoidable. What can be remarked upon is that a very few of the photos seem to have been enlarged to an undue degree, resulting in fuzziness. (Photo credits are bundled only at the back of the book so it’ll take you some time to match up; that they are listed in alpa order by first name is an unconventional choice.) There are two fold-outs, one a blueprint and one an events table (below).

Nye started as a working motorsports journalist in 1963, at Motor Racing magazine, so the 250GTO would have been something he followed in period. It is either ironic or fortuitous that at the start of his three years of research Nye was unaware that another GTO book was being hatched, the quite aptly named Ultimate Ferrari 250 GTO – The Definitive History by fellow Brit and colleague James Page and Keith Bluemel (Porter Press, ISBN 978-1-913089-02-3), the latter having also co-authored with Jess G. Pourret the 1999 book Ferrari 250 GTO which, standard-setting in its day, can now be retired. A similarly premium effort, the Page/Bluemel opus spans 632 pages in two volumes—at a cool £480/$700 for the standard edition which is limited to 750 copies—and tells the GTO story at a different level of magnification, both larger and smaller, insofar as it covers all three years of production.

Comparing one book to another is not like comparing apples to apples (which, if you think about it, is a rather unsatisfactory exercise in the first place). In an ideal world you’d have both, in a practical world you buy the one you can afford. A look into the Acknowledgments of the Nye book shows all the bright stars in the Ferrari world gave of their time and wisdom: fellow authors, historians, the factory itself, key Ferrari personnel, car owners and people deeply knowledgeable about their repair/upkeep. 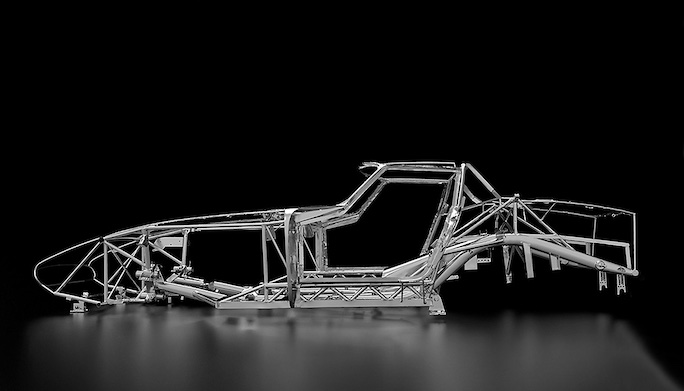 The bare chassis of 5573GT during a recent rebuild by Parker-Newton Restorations and Patrick Ottis & Co. that was completed just in time to be on display at the 2021 Pebble Beach concours for the model’s 50th anniversary gathering.

We would not serve our ever persnickety readers if we did not call out one issue: the body copy is in commendably large type size but the captions are much smaller (annoying) and grey against a white background (infuriating, especially since they could so easily have been kept visually distinct from the body copy by other means). Well, there’s another issue: no Index. 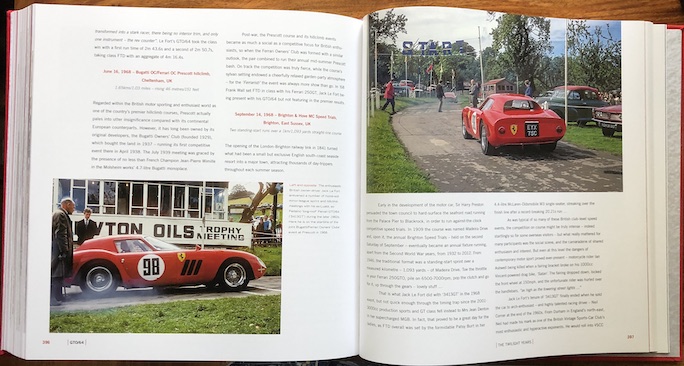 Once upon a time the Ferrari and Bugatti clubs held joint events; here the 1968 Prescott Hillclimb.

The production run is limited to 1000 numbered copies; personalized numbers can be requested  but all the “good” ones are long gone now. Note, though, that the number is not in/on the book but on a separate card (what havoc that will cause in years and decades to come when the books are traded on the secondary market). Also available in an “Uber Edition” of 100 autographed copies, leather-bound and slipcased, £1265 UK/£1300 elsewhere. The roundels are ceramic (on the standard edition it’s a plastic-like gloss laminated card).

The consistent quality of Nye’s research raises the bar for everyone, including himself, and the world is the better for it. In ways that entirely transcend the laser focus on a decidedly niche subject, this book is a veritable beacon. 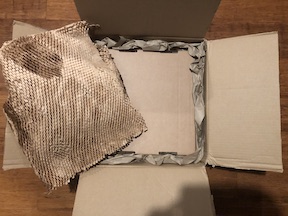 Ordering an expensive book from half a world away is fraught with uncertainty. Good packing is everything: outer box, padding, inner box, and inside that the slipcased book.

Nye already has a stack of awards to his name; don’t be surprised if this book snags another one.

Select bookstores in the UK, Germany and France carry the book but anyone anywhere can order from the UK publisher direct. (Make that “should order” because the bulk of a publisher’s revenue is lost to the distribution channel.)

Cosmos, The Infographic Book of Space »
« Morris – the Cars and the Company