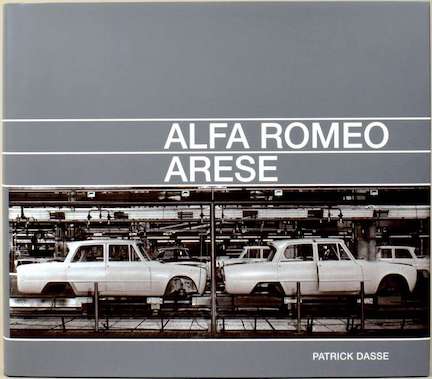 (English / German) Some years ago an interesting set of books with an Alfa Romeo theme (GTA, GTAJ/GTAm) came across our radar. Heavy on photos and technical documentation it was titled Alleggerita, a name that reminds AR enthusiasts of the delectable lightweight version of the Giulietta Sprint in the 1960s. Bodied by Bertone, fewer than 200 of that Veloce Alleggerita model were built and just to give you an idea of how special a bird this is, consider that one fetched $350K at auction in 218!

Those Alleggerita books, published in Germany in a German and a bilingual version, proved elusive in the US so we never reviewed them. Color us surprised, then, when in 2018 the same author announced seemingly out of the blue a new Alfa Romeo book, actually a set of six related books all about the Giulietta Sprint’s successor, the Tipo 105. (Strictly speaking there was a 7th Alfa book in 2017, about the Tipo 33)

Now, why it is that Dasse has such a sustained interest in these particular Alfas is never made clear in any of the books. (He has also done a substantial Porsche book.) His publishing house and affiliated businesses focus on motorsport, art, and medical books. In addition, and here we move a little closer towards explaining what makes his books different, his firm offers a digitization service to photo archives (NORITSU HS-1800 Hi-Quality/Hi-Speed-Scanners) as well as book design and typesetting. Photos, a staggering 1700+ across the set, extraordinarily well processed are what’s unique about these books. In fact, the minimal text they contain is limited to photo captions (and sometimes not even that) and the occasional bit of narrative.

Talking of the books as a “set” is unproductive insofar as they have only one common denominator, namely that one model series in its various derivatives and the Arese factory where they were made. Each book is completely self-contained, each dedicated to one model (Giulia, Giulia GT, Spider, Zagato, Montreal) and they are not numbered or imply any sort of order. One of the six covers the production flow at the Arese factory, which would apply to all Tipo 105s, so we might as well begin our review cycle there.

But we first need to return to the Alleggerita books once more: when Dasse worked on that manuscript that would grow to 1400+ award-winning pages published in 2012, he made contacts at Alfa’s Centro Documentazione and also saw for himself not just the quantity of the archived material but also the cohesiveness. In the Arese book, for instance, it is possible to document every step of car production from casting the raw material to test-driving the finished cars at Balocco. Even if you had no interest in Alfa, the mostly full-page photos (and in in landscape format) from 1963–72 are an important visual record of how car production worked at a specific moment in place and time, plus all the attending social and lifestyle observations they afford (ergonomics, fashions, occupational safety features, gender roles etc. etc.). Not least, it is fascinating to see the demeanor of the people on the shop floor. Some are mugging for the camera but some may well have been unaware of being photographed.

It is really quite remarkable that someone saw merit in publishing this material, and then also doing it properly in terms of paper and print quality.

Now, the whole set of six will set you back north of $600 . . . but short of going to Alfa Romeo you’d never see these photos anywhere else. In fact, thumb through any of the Alfa books you may already have and except for the odd publicity shot or the like, you won’t have seen these photos before because there weren’t taken with publication in mind but simply as an in-house, record-keeping step. (Some of them show groups of visitors touring the factory.) Moreover, the Arese factory itself is today almost totally abandoned because Fiat has moved design and production to other factories, even outside Italy. The last holdout on the site was the design department, Centro Stile Alfa Romeo, and they moved to Turin in 2009. Only the museum is still here, in an architecturally significant building.

Those last few remarks lead to another one: it is a shame, really, that the book does not contain more text. The introductions to its chapters, 13 in this case of 20–40 pages each, contain rarely more than a few paragraphs. The first sentence in the first chapter is a good example: “The Foundry and the forge [above] were still in Portello in 1963, where components made from aluminium were cast and those in steel were forged.” If Portello means nothing to do you’d be missing a whole layer of background. This district of Milan was a famous car manufacturing area, also for Darracq, Citroën and Fiat, and home to coachbuilders Isotta Fraschini, Touring, Zagato and Cesare Sala. It was Alfa’s first and main factory between 1908 and the 1960s and remained open until 1986. Arese went operational in 1963 and the first car completed there, the Giulia Sprint GT, still had its engine and chassis made at Portello. Arese, incidentally, was configured to output 160,000 cars a year, a number that was not achieved in the Tipo 105 series. (The Alfetta and Alfasud followed.)

This is one of the longer chapter openers, almost half a page (per language).

Even the photo captions could do with some more detail. One shows a fork in the road with a sign on which one arrow points to the Alfa works and the other to “Varese.” How easy would it be for the newbie to not realize that Varese, that northern Italian city famous for its 14 frescoed chapels, has nothing to do with Arese?

And this is one of the shortest chapter openers. Look at those scale models in the design office…what people wouldn’t pay for those today!

The book even covers steps not specifically related to car production, such as training, R+D, parts and warehouse, with the latter two of particular interest because Alfa did CKD cars—Cars Completely Knocked Down, usually export models for assembly at the destination in order to minimize tariffs.

To say that this book, and its five companions, is invaluable, because they contain heretofore unpublished material is to state the obvious. What is not obvious is how long Dasse, who runs his own publishing firm, can wait to recoup his investment before he can do more books. In other words, folks, go reward such commitment to the cause!

Classic Speedsters »
« On a Global Mission, The Automobiles of General Motors International, Vol. 1