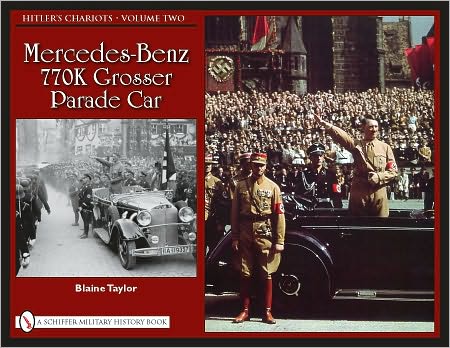 This second of now three installments in this multi-part series on Hitler’s Chariots deals with the 1930–1943 German luxury car nicknamed the “Großer” (large) and mainly used by governments as state vehicles. Few were made, fewer survive, and when they change hands nowadays prices are in the millions of $/£/€.

Given the title of the series it is no surprise that the book’s focus is on the Nazi angle rather more than the car proper. For the reader interested in this particular Mercedes this is disappointing as there’s not much written about the 770 (this may well be the only English-language book at present). If you additionally have political-historical or at least pictorial interests you’ll most likely feel you’re getting something out of this book.

For background on the author and his approach we refer the reader first of all to our review of vol. 1 in this series. This new book, published only a year after the first and probably written concurrently, is very similar in both the strong (the photographic record) and the weak (organization, focus, point of view). It seems, again, that the car is—figuratively—the vehicle by which another story (Hitler et al, Nazi propaganda use) is told.

As a WWII specialist with a penchant for forensic work on photos one must expect of Taylor to bring rigorous scholarship to his work. In the Introduction to vol. 3 in this series, Taylor makes a bold, self-laudatory claim to that effect—thereby tying, as it were, his own noose. Moreover, Taylor deals with a period of which a rich photographic record exists, ergo no part of the story he tells should need to be fudged intentionally. But it is, and there is really only one other polite explanation—carelessness. Consider just one example, two photos (p. 187) dealing with the same scene: Hitler’s motorcade at the 1936 Olympic Games. The photos share one caption that implies we’re seeing the same event from two different angles. It is not rocket science to note that the license plates on Hitler’s car are not identical, that the entire car is in fact not the same (one has a center-mounted headlight and a canistered spare tire), and that, based on the decorations on the Brandenburg Gate in the background and the military escort on the side, this cannot be the same event! For a historian, misinformation is an unforgivable breach of trust. For a photo analyst, this is career-ending incompetence.

A more forgivable mistake is one that requires a certain specialized knowledge in an area not directly related to the topic. Page 147 shows an aircraft identified as “Hitler’s Focke-Wolf 200.” Yes, Hitler did use a FW 200 V3 and surely Taylor has seen it before; it has four engines and a distinct squarish rudder. And surely he can count, so why does he show a photo of a plane with two engines? Its fairly forward-protruding engine nacelles and rounded rudder would make aircraft folks see it as a Heinkel 111, a medium bomber of the day. Given this sort of glitch how can the reader be certain that Taylor is certain when he postulates that, for instance, one car photo shows “pristine Bosch headlamps”?

Taylor’s books don’t show chapter titles atop the pages so it’s easy to forget what one is supposed to be reading about. Even so, you’d notice the incongruity of detail shots of the 770’s interior or assembly line photos being randomly interspersed with Hitler’s parades and motorcades. One or the other is in the wrong place, and this is a recurring distraction, further exacerbated by the lack of an Index. Even peripheral snippets such as the origin of the Mercedes logo or the question of whether Hitler knew how to drive or diagrams of a typical motorcade set-up are woven into the overall narrative instead of broken out as sidebars or put into a “miscellaneous” chapter. Similarly interspersed with the general text are car specs or production numbers and the like. Yes, there are useful bits here—if you can find them.

If you don’t think of this as a “car history book” you’ll be ok. As a photo album it works just fine—as long as you are interested in the Nazi area—and saves you many trips to many archives to clamp your eyes on such a multitude of images. In fact, should you find yourself in the enviable position of restoring a 770 you’ll find the many car shots of immense value.