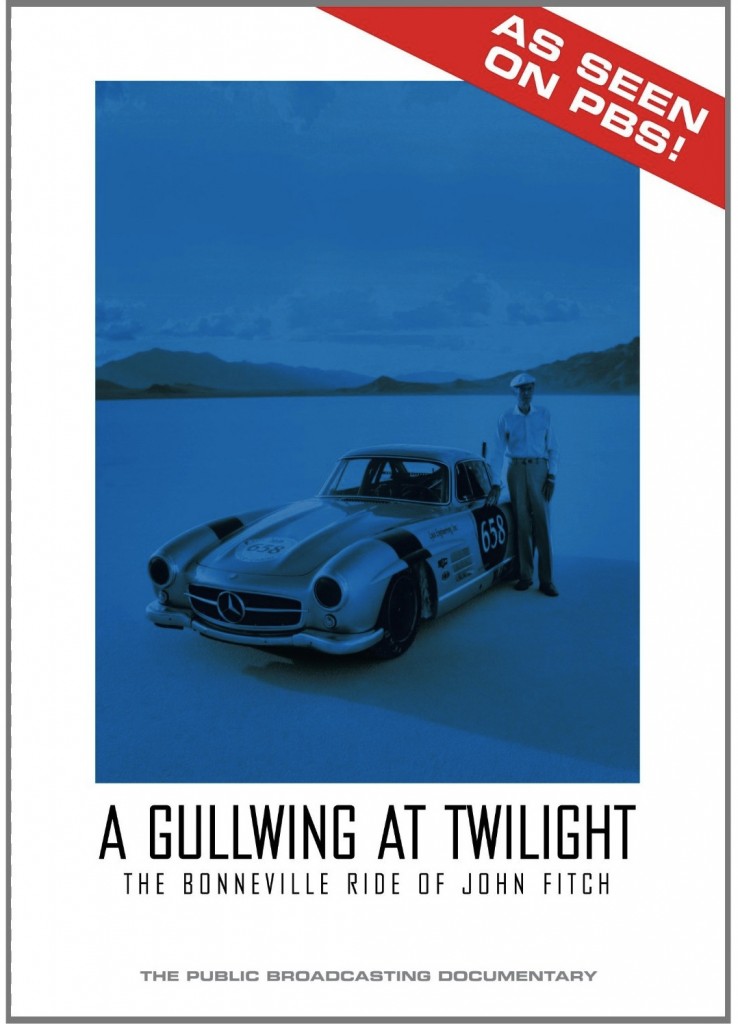 John Fitch is today a living testimony to the fact that attaining a “certain age” need have no relationship to being useful or productive. One must only remain fully engaged in life and living and, of course, be blessed with the gift of good health. As proof, take a look at this DVD, A Gullwing at Twilight, Shifting Gears Gracefully: The Bonneville Ride of John Fitch. It was gloriously filmed by Chris Szwedo, who also sensitively scripted, edited and produced the finished film. It was so well done that the Public Broadcasting System picked it up for broadcast, plus it earned the approval of the Motor Press Guild which in 2006 named it a winner of the Dean Batchelor Award.

Szwedo not only accomplished the filming and editing, he also composed and performed the hauntingly lovely musical accompaniment. A separate musical cd, also titled A Gullwing at Twilight, offers one the ability to listen to just the music without the narrative voice-overs or the visuals. The liner notes accompanying the soundtrack tell that the 18 tracks were accomplished by Chris playing in turn, and thus accompanying himself, a Yamaha Motif ES6, a Fender Stratocaster, and a Taylor acoustic guitar.

As major as the driver’s role is in the story, so too is the car a star; the 1955 Gullwing Mercedes owned and prepped for Bonneville by Bob Sirna and his crew. Fitch, Sirna and the Gullwing take to the Salt Flats during Speedweek 2005, hoping and striving to set a class record. Szwedo isn’t a racer and it was only his second time ever to be on the Salt Flats. Yet he ably captured the spirit, the mood, and the facts. The resulting documentary dips back to recount Bonneville history, while showing and telling of others who accepted the challenge that year, with Fitch and the Gullwing front and center.

Szwedo remembers the filming experience on the Salt Flats, “What really spurs you on is this amazing backdrop that brings out the best in you—or it spits you out, or cooks you. We had a very small crew, and lot’s of water. You feel insignificant, and yet you also feel inspired. The late afternoon light—that makes up for the pain of other parts of the day.”

And Szwedo recalls Fitch as the “guy (who) handles everything with so much grace. He was the guy who forced (himself) into three layers of NOMEX, HANS devices, wrist straps, and so many other things. It was so apparent that it was tough for him, but fun too. He actually underwent a transformation as he got into that racing uniform…subtract 15 years. Put on the helmet and subtract another 30. He’s very free-market, very self-driven and self-determining When he gets in the race car, it’s not an old timers day game. He is actually trying to go faster in that thing than anyone has ever gone before. John Fitch is, well… a bit of a scientist. He’s fact driven, especially as an inventor. He may not (have) understood my experimental angle. I didn’t have to make him heroic. He already is.”

Of the finished documentary Szwedo observes, “In the end it’s a creative experiment for me, and a swing at life. The real audience—those passionate over a good story or another tale about their sport—they always seem to find what they’re looking for. It was my goal to be honest about it and not let them down.”

And he didn’t, as the Motor Press Guild honors attest.