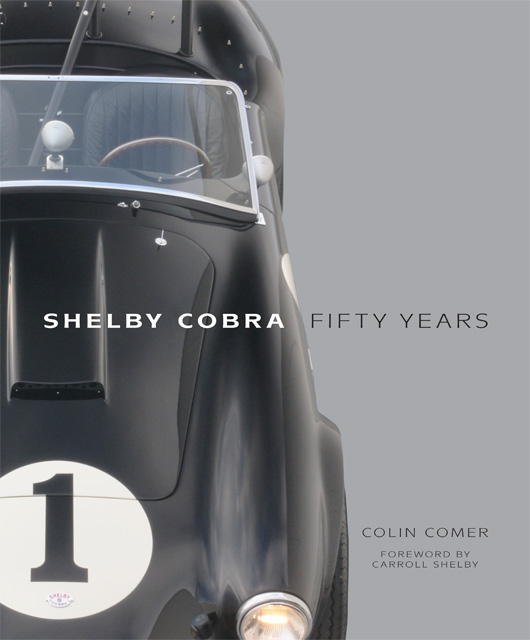 It was September 1961—fifty years ago, hence the title of the book—that American amateur racer Carroll Shelby contacted British specialist manufacturer AC Cars, maker of wheelchairs, invalid carriages and the occasional underpowered sports car, to ask if they would build him a car, but with an American V8 engine he was going to supply. Who could have known then what this would lead to?

Shelby himself didn’t. In the Foreword to this book he says he “couldn’t conceive of five more anniversaries of anything, let alone fifty.” And, says he, Comer is “the right guy to write this book.” And who could argue with Comer’s qualifications: as owner of multiple road and racing Cobras, proprietor of a restoration shop, dealer in collector cars, magazine contributor and author of The Complete Book of Shelby Automobiles (2009), he uniquely combines hands-on in-the trenches experience with boundless enthusiasm and considerable wordsmithing ability.

Enthusiasm really is an important asset in writing the sort of book that rises above the fray. We can all relate to Comer’s recollections of working at the local garage as a teenager, knowing where the cool cars in town lurk, saving for his own set of wheels. But who, after seeing the market get away from him after watching it for years, boldly takes the money that’s supposed to pay for the new house and buys a collector car instead? Comer did, paying a then-record price for a 289 Cobra, a car he had never even driven before. (“You can sleep in your car but you can’t drive your house!”) Such was the allure of the Cobra . . . and it comes through in the book.

When Comer titled his previous book Complete he probably meant to say—as we did in our review—that it was “the first real overview of all 1963–2009 Shelby street and race cars” and not that the subject had been fully exhausted for the ages. Much, much has already been written about Shelby cars. Comer doesn’t so much till new ground in this book but reshuffles the deck in an interesting way. There are new bits, to be sure, especially among the photos, but the real strength of the book is in giving a reliable, accurate, comprehensive account from which you can safely quote without fear of contradiction. For the newbie the book will lay a solid foundation and the old hand will almost certainly find some minutia heretofore unknown.

Comer’s own description of the book is rather apt; he likens it to “a stack of the Cobra’s high school yearbooks.” It is not meant to be an exhaustive micro-detailed history of the man, the firm, the cars, the racing. Nor is it a nuts-and-bolts look at technical or developmental aspects of the cars, or a chassis registry, or a collector’s guide. It is a sweeping, all-encompassing, high-level overview and a sympathetic look at many facets of Cobradom from drawing board to auction block. The book complements—and improves upon—the existing literature but it is not, as so many reviewers breathlessly proclaim elsewhere, the only book you should have.

As one would expect, the story is told chronologically. While not of critical importance it should probably be pointed out that the cars shown are not. Given the rarity and importance of original Cobras it is commendable that they are identified by chassis number, but no year of manufacture is given and nothing is said about continuation (or completion)-series cars. You’ll meet the key agents in the Cobra story; learn about Shelby American, taking the fight to other makes (not just Ferrari!), and the cars’ post-competition lives; and you’ll read about club racing then and now, the role of the Shelby American Automobile Club, big-time collectors and guy/gal-next-door enthusiasts, Cobra memorabilia (toys, apparel, music and, not to forget, the famous chili seasoning mix), and learned opinion about the virtues/evils of restoring Cobras.

At a size of 12.25 x 10˝ the large-format book makes for a generous canvas for the hundreds of illustrations, the breadth of their selection being as impressive as the reproduction. There are probably as many “official” period photos as there are new, mostly restored, cars including non-factory versions. They are augmented by a large number of odds and ends such as invoices, ads, magazine covers, parts catalogs, correspondence, even Carroll Shelby’s and Phil Remington’s paychecks. Almost all photos are credited.

Appended are the “Important Cobra Facts and Figures” that first appeared in Comer’s 2009 book. Index.

A good, clever, fun, useful book. You’d gladly pay more for it if you had to—in fact you can pay more and buy direct from the author one of the 50 autographed (personalized inscriptions are possible) $200 limited-edition sets that come with a brushed aluminum serial number plaque designed by him.

(If you know anything about printing, you’ll be impressed by the multi-ink and varnish dust jacket and marvel at how the publisher is able to crunch the numbers to do this. That said, a few $$ spent on proofreading would not be unwelcome.)