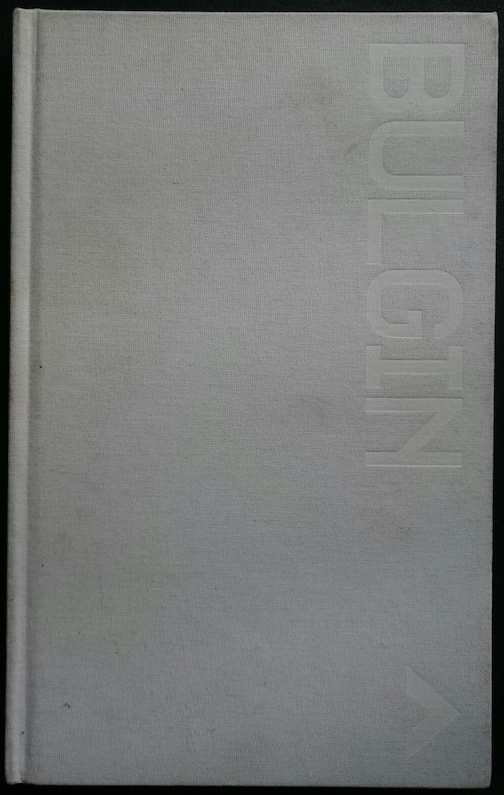 This review starts with a warning; this book is out of print, few were printed in the first place, nobody wants to be parted from their own copy, and that’s why copies of this slim 130-page work can sell for $450 or more.

The book is simply called Bulgin and if you want to read the best work of the truly gifted motoring journalist Russell Bulgin (b. 1952), then, trust me on this, the book is worth every penny.

I have been reading stuff about cars and racing since 1967 and, if I still had the money I’ve spent on magazines there’d be a nice Ferrari F458 in the driveway instead of piles of yellowing newsprint in what we laughingly call “the study” at Aston Towers. After nearly half a century of reading I have decided that there are five men who stand out from the general mediocrity of motoring journalism and they are LJK Setright, Denis Jenkinson, David E. Davis, Pete Lyons and Russell Bulgin. If I think carefully about it, Bulgin was probably the best of them all. Imagine an amalgam of Stephen Bayley’s eye for style and the zeitgeist, Nick Kent’s razor-sharp prose in his glory years at the New Musical Express, and Tom Wolfe’s effortless cool and you get the picture. If you want to know about Ayrton Senna’s day out in the Welsh Mountains driving rally cars then Russell’s your man. He’s also your man if you want to know just what it feels like to try to Vmax a Lotus Carlton on the Autobahn, or what it’s like getting down with the cool kids on the Chelsea Cruise in a Mercedes 190E Evo homologation special.

Of course Bulgin loved cars but he painted on a much broader canvas than most journalists; his greatest ability was effortlessly to grasp what was cool, what wasn’t, and then to tell us exactly why it was so. He had a unique style—often conversational, always knowing, effortlessly funny, and piercingly insightful. Bulgin would find it both ironic and amusing that his biggest legacy is the fact that rather too many current journalists are still trying, but failing, to ape the Bulgin style. This tendency which has been exquisitely satirized by Richard Porter on his Sniff Petrol website (and, if you are not familiar with it, just read a couple of spoof reviews by Porter’s Troy Queef., road tester extraordinaire and no stranger to cliche).

Bulgin wrote for many UK publications including Motor, Autocar, Car, Evo, Cars and Car Conversions, and The Daily Telegraph but he was never the guy who drew the short straw of road testing duty, not for him the agony of writing a thousand words of calm objectivity about yet another dull new hatchback from Ford or VW. He wrote instead about subjects such as a car’s body language, its societal subtext, and its capacity for irony but as a writer he was just as adept in his incisive take on motorsport. He was Grand Prix reporter for Motor and was there to see Senna win his first Grand Prix at Estoril in 1985—“A short sharp shower preceded the Portugese Grand Prix and a short sharp shock disappeared into the rain-lashed middle distance as the lights blinked green. The shock’s name was Ayrton Senna and he thought the race should have been stopped.”

It’s temptingly easy to sneer at Elvis Presley’s grisly taste in cars and clothes but Bulgin, ever the iconoclast, dug deeper, and thought deeper still, than most of his peers. He went to Graceland and tracked down Percy Kidd, the man who sold the King his Cadillacs and his De Tomaso Pantera, the car that was punished by its owner for its misbehaviour. “So he took out his pistol and shot it fulla holes,” reported Mr. Kidd. Driving from Memphis to Tupelo, Mississippi, Elvis’ birthplace, Bulgin stopped at the shack that Vernon Presley had built. “. . . two room simple. . . . One glance at 306 Old Saltillo Road explains the gold-plated seatbelt buckles and plumped cushion excess of Graceland.”

Motorsport, especially forest rallying, was an addiction for Bulgin but his obsession with four wheels took him to some of the less explored backwaters of the automotive world. Here he is, writing about the stealth machine that was the fastest car on Britain’s motorways in 1990, “the fast lane . . . is where you get blitzed by a Bedford Astra Van at 95.” He then explains just why they are so quick —“Because there is an unspoken code surrounding every move made by a serious van user: don’t give a shit. That, blunt as it seems, is the Zen of van driving.” 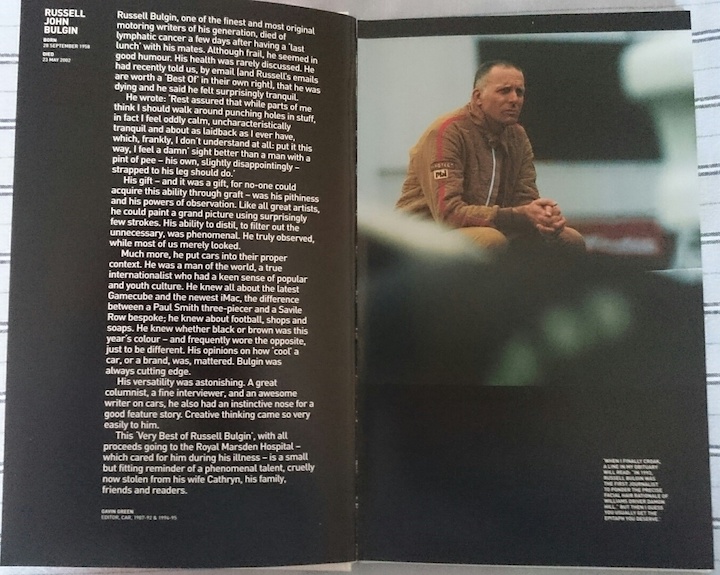 Russell Bulgin died of cancer at 43 and this book was published by his friends to raise funds for the Royal Marsden Hospital where he had been treated. If you ever see a copy at a friend’s house then all I can say is either steal it outright or borrow it and just forget to return it. It’s worth losing some friends for, believe me .

Now let me give you a taste of Russell at his finest —about the 190 Evo first:

“This was going to be the perfect evening. What more could a man desire? Had everything I needed: two South London girls with minds like razors, a stash of Ribena, a cassette of T Rex’s finest work and a £55,000 Mercedes Benz styled by people to whom the phrase ‘creative drugs’ was, quite patently, far from oxymoronic.”

“Just one look. That’s all it takes now. Just one look. And instantly you are either a believer, a convert or even—just maybe—an evangelist. Or perhaps you don’t get it at all. Don’t care. Want to continue your monochrome life locked in a turbo diesel world. Don’t dare to dream, . . . Look once, look twice, drool. That’s the core of the Viper GTS.”

And on a motorway accident:

“Last Thursday morning I had a huge shunt on the M4 westbound. Early morning, lightly trafficked, perfect visibility: the clean crew had to be called. In the restaurant at Heston Services, that tricky cafetiere/damp tray interface finally got the better of me. I’d been eking out grip on dry sections of the tray but the cafetiere suddenly understeered. I couldn’t hold the slide—it hit the carpet like an Indycar tagging the wall at Turn Four.”

There were many affectionate obituaries after Bulgin died but this coolest of journalists had that base covered too, with these words: “When I finally croak, a line in my obituary will read ‘In 1993 (he) was the first journalist to ponder the precise facial hair rationale of Williams Grand Prix driver Damon Hill.’ But then I guess you usually get the obituary you deserve.”