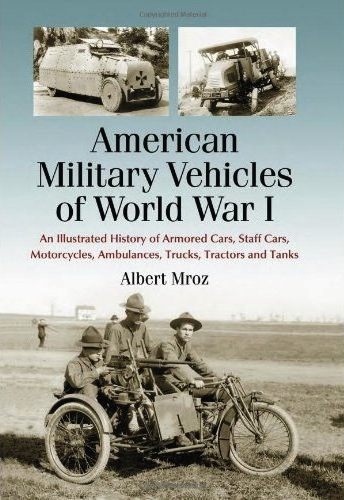 For better or worse, war, or even the prospect of war gives rise to a degree of need and sense of urgency that accelerates development of whatever tools are deemed necessary to gain supremacy, be it throwing rocks at each other or splitting the atom. Due to a unique constellation of events, World War I—the Great War, the War to End All Wars—was the first conflict to see widespread use of mechanization, a threshold hybrid stage where horse, camel, and mule fought alongside car, tank, and airplane.

For the sake of context, Mroz sets the scene by summarizing the specific events that led to the outbreak of war, the participating nations’ state of preparedness both philosophically and technologically, and the transition from scrambling to requisition anything that could possibly have any war application to developing purpose-built vehicles for specific tasks and conditions. Beyond these introductory remarks the book is not concerned with political, social, or even strategic aspects of the war although it does weave those strands into the overall story of vehicle development and history from a technical and logistics perspective. As Mroz writes, “the moral deficiencies of those involved in making or carrying out warfare” are left for others to sort out.

Mroz is a vehicle historian, especially of utility vehicles. Recall that in 1996 he wrote the reference work The Illustrated Encyclopedia of American Trucks and Commercial Vehicles which obviously included military-specific vehicles. This new book now specializes in just them and even so the author thinks a separate book could have been devoted to each category. The book is presented in the form of a narrative of broad themes rather than an encyclopedia-like neatly divided treatment by maker or vehicle type. Where it has a bearing on motorization, occasional reference is made to railroads, ships, aircraft, and even cavalry. Also, considering that the “technology transfer” in the late 1800s was largely from Europe to the US, mention is made of European vehicles as applicable.

The topic is indeed unwieldy, with many concurrent and overlapping developments, and if it weren’t for the thorough index much of the detail contained in it would be undiscoverable later after the initial read. From developments in metallurgy to the refinement of techniques of mass production and standardization, and from performance parameters to specific war actions the book covers an enormous amount of ground. Special consideration is given in an early chapter to the role of the 1916/17 US Punitive Expedition against Pancho Villa as a test bed for war apparatus and logistics. Vastly important lessons were learned but there was not enough time to analyze let alone implement them when the US declared war on Germany a short two months later.

Throughout, the book is illustrated with many period photos, advertisements, brochures, and technical illustrations that range from the operating principles of a gas furnace (to melt steel) to a 1914 patent drawing for a kick-starter.

Appended is a 1914–1919 chronology of the war’s progress, in order of year and key historical event, and there is an extensive Bibliography in addition to the aforementioned Index.

To say it once more, this is not an easy subject. Through no deficiency in the storytelling or organization of the book, at the end of it the reader will likely have a certain sense of disorientation over the lack of linearity or even specific conclusions. So, you take a break and read it again. A companion volume covers, in very linear and encyclopedia-like fashion, the histories of 225 American civilian manufacturers at the same time.