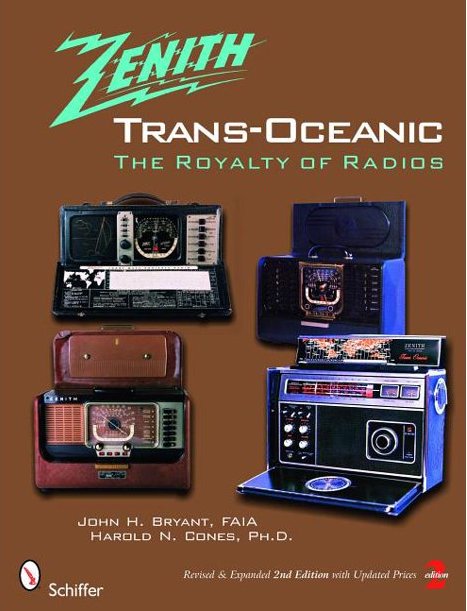 Far from being a new book, this one was first written by these two authors, John H. Bryant and Harold N. Cones, and published by Schiffer in 1995. This second edition was published in 2008, well before this commentary’s 2022 posting. This significant book is still very much in stock and available. It is significant due to its tightly focused and very thorough coverage of the history of Zenith Trans-Oceanic radios as well as details and specifics on all models from the very first, the 1942 7G605 Trans-Oceanic Clipper, to the last produced in 1981, the R 7000.

Several within your commentator’s circle of longtime auto collecting friends also are collectors of vintage radios thus sparking my awareness and enlightening me. One of those friends has several of the models that are the subject of this book and also has the first edition of this book enabling me to compare page by page and then, with assuredness, share with you the observations that follow regarding this second edition.

Note that year when the first model was introduced. It was a scant few months after the Clipper’s debut that the War Planning Board decreed that, as with many industries in America, all of Zenith’s efforts would be devoted to the war. Although not mentioned in this book, you may recall from the commentary of an earlier post on the two-volume biography of James J. Nance written by Stuart Blond which he titled Spellbinder, that Nance had been hired to shepherd Zenith through the years of World War II which is when the Trans-Oceanic really came into its own. This book focuses on the actual uses to which Zenith radios, including Clippers, were put during those war years and then goes on to include the Korean conflict before turning its attention to the development, production, and marketing of Trans-Oceanics to the general citizenry.

That postwar production included Zenith accepting the realization that no matter how good the internals of its radios were if the exterior wasn’t “pretty” sales would suffer. The industrial designer today most associated with Zenith was Robert David Budlong. You can observe the differences in the image immediately below. In upper left is the CG601 attributed to Budlong, who also designed the iconic shape of Sunbeam’s toaster, whereas the earlier unstyled Zenith radios below it and on facing page are essentially just boxes. 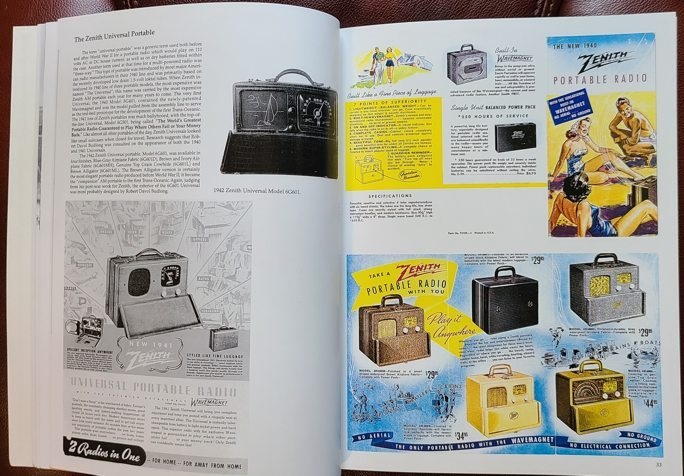 The book then progresses, model by model, to show and tell of the various iterations of the Trans-Oceanic. The image below is indicative of the type of detail shown for various models. This one happens to be Royal 1000 Series and the larger one in uppermost right hand corner is a 600 Series. Nearly 300,000 of the 600 Series Trans-Oceanics were produced from 1954 to 1963 with half that amount of Royal 1000s produced 1958 to 1963. 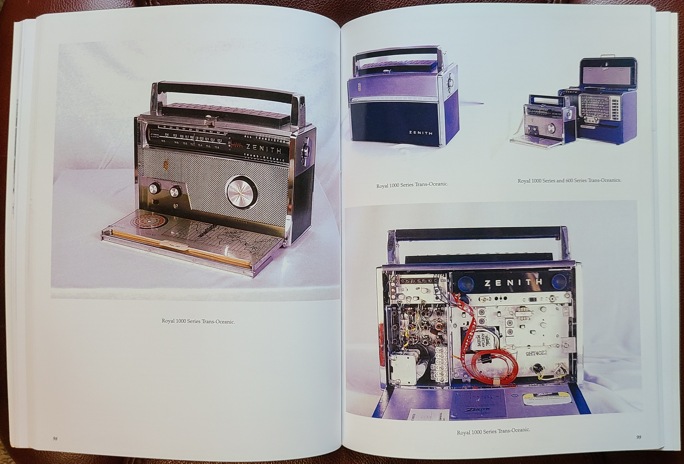 For the collector or reader who has interest in acquiring a Trans-Oceanic there are several chapters covering “Finding, Buying and Collecting” as well as ones on “Physical and Electronic Restoration” of tube models and others covering solid-state ones. There’s even a set of pages giving details of “Parts Commonality” between various models and sources and resources.

The authors, professors both, credit creating the first edition as the beginning of their decades-long collaboration during which they’ve spoken at symposiums, before radio enthusiast clubs, along with publishing papers and other books. When Schiffer asked them to consider a 2nd edition they “researched carefully the file materials and decided that the historical portion of the book is largely complete as it stands.” Thus the first 159 pages of this 2nd edition are word-for-word and photo-for-photo identical to the first edition—albeit that your commentator noticed many of the photos in the second edition are now reproduced with increased sharpness and clarity. 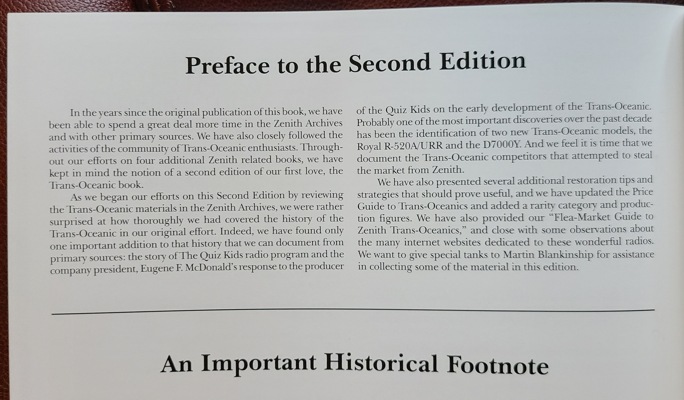 All the new material of this second edition is grouped at the end of the book because that was “the most cost-effective means of producing a true second edition that is both affordable and usable to readers.” Contained on the sixteen new pages are words and images on “Trans-Oceanics, Companions, Cousins, and Competitors” such as this page-pair immediately below 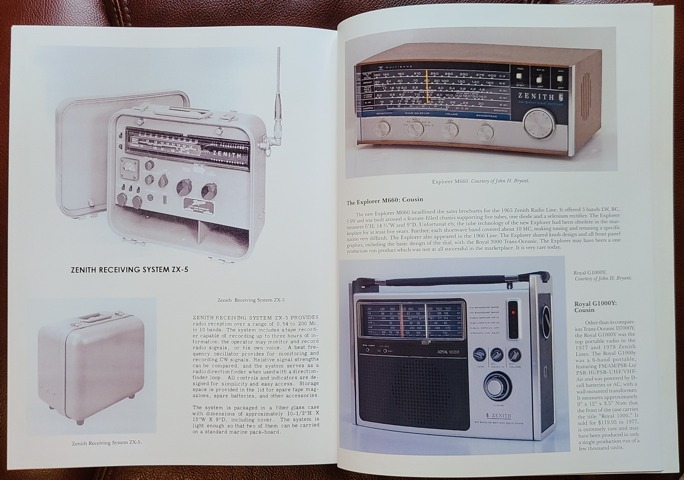 This is one of those books that truly could have the word “complete” somewhere in its title and not be the least misleading. There’s a tremendous amount of information packed into this Second Edition and all of it very readable as incorporated in the story are observations on the culture of the times and how lifestyles and interests—and technological advances—played their role in making “the Zenith Trans-Oceanic the world’s most romantic and expensive series of portable radios.”

Bibliography at conclusion of one chapter, endnotes for all chapters, appendices, no Index

Posted Under: Other Genres, Technology | Author: Helen Hutchings | No comments yet