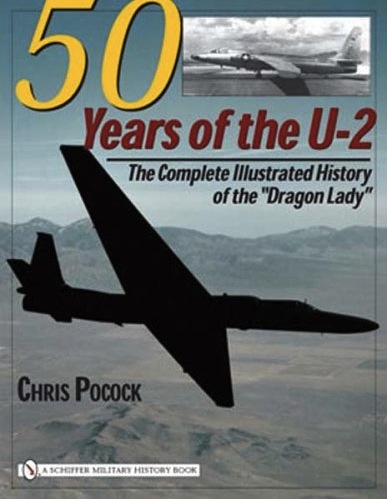 ~Yesterday, October 14 fifty years ago, a U-2 from the 4080th Strategic Reconnaissance Wing out of Texas photographed the Soviet military installing nuclear warhead missiles in Cuba, precipitating the Cuban Missile Crisis.Thirteen days later, another U-2 was shot down over Cuba by two surface-to-air missiles, killing the pilot who became the first recipient of a posthumously awarded Air Force Cross.~

Conceived as a very high-altitude reconnaissance aircraft, the only other traffic a U-2 would encounter since the retirement of the SR-71 Blackbird and the Space Shuttle at its 70,000-foot operational ceiling would be the occasional space craft bound for the International Space Station.

Much like the U-2 he writes about, Pocock’s book reaches way up there into the rarefied thin air few others reach. His books are so good that the CIA, the aircraft’s principal operator until 1974, praises him as “today’s foremost authority on the U-2 and its development.” Similar praise is heaped upon Pocock by pretty much anybody who is anybody in the professional U-2 community. This is not just idle talk: in 1995 he became the first civilian foreigner (he is British) to be invited on a ride on one of the four dual-control trainers—and that was after only the first two (Dragon Lady: The History of the U-2 Spyplane in 1989 and The U-2 Spyplane: Toward the Unknown in 2000) of what would become several U-2 books. Even Kelly Johnson, the father of the U-2 and so many other seminal aircraft, says he himself finds things he didn’t know in Pocock’s books!

This 2005 book marking the aircraft’s golden anniversary goes significantly beyond the first one, mainly due to now-declassified documents and many more interviews. Pocock, in fact, considers this new book complete enough to be “probably [his] last word” on the subject. Also that year the Dragon Lady’s eventual retirement was announced for 2012—in favor of the unmanned RQ-4 Global Hawk unmanned aerial vehicle —and so we intentionally scheduled this book review to coincide with it. Even though retirement has been postponed until 2015, we’ll review the book now anyway!

The U-2 was initially intended as a throwaway product and that it has remained in service for so long is because it alone fulfills the unique parameters of its mission. All spy aircraft have one obvious advantage over spy satellites: they can be immediately dispatched to anywhere whereas a satellite has a prescribed orbit that is difficult to change. But unlike other spy aircraft, the U-2 has unmatched loiter time—9+ hours without in-flight refueling—thanks to its 104 ft wingspan that makes it more of a powered glider than a jet. Even today it is so vital to national security that, according to Air Force figures, the remaining aircraft have since 2003 flown more than 95,000 hours providing intelligence, surveillance, and reconnaissance and are therefore routinely rebuilt and retrofitted (cost since 1994: more than $1.7 billion).

A Foreword by USAF Maj. Gen. Patrick J. Halloran gives an entertaining introduction to actually flying a U-2. He should know because he flew them for 9 years/1600 hours after joining the program in 1957. The other thing he would know about is the Big Picture of strategic reconnaissance because his last Air Force assignment was Deputy Director for Strategic Command in the office of the Joint Chiefs of Staff—but he leaves that part of the discussion to Pocock.

Pocock begins with the 1953 “eyes only” memo that outlines the “unique political and practical problems involved with peacetime overflights of ‘denied territory’ since 1946” that would culminate in the spy plane concept. In quick order he outlines the key problems and key players, the Bald Eagle design study, Lockheed’s Skunk Works, and first proposals of suitable aircraft. Even the reader new to Cold War-era conceptual issues will thus get a solid understanding, and appreciation, of the U-2s design and performance envelope—and why it was the CIA and not the Air Force that was given operational control of the program

After a detailed look at development and testing (the very technically minded reader may find this chapter a bit too brief) the remainder of the book relates the operational history of the fleet, always with reference to technical changes necessitated by mission requirements. Entirely aside from the obvious aircraft-specific angles, anyone with an interest in modern-era world history will find here background to all those headline-making news stories!

Note that if you already have Pocock’s second book, its coverage of the first five years of the program is included here in similar detail but with more ancillary information in the form of first-person accounts and documentary material. This makes up maybe 10 of the 40 chapters so obviously there’s a whole lot more here. Plus, there are five Appendices presenting two pages of abbreviations, aircraft and systems data, unit and aircraft histories, and a list of pilots by outfit/project in year order (including even pilots who did not finish training or qualified for operational duty). Chapter Notes, incidentally, are bundled at the back of the book—but this is a large and heavy book so there’s going to be a lot of laborious page-flipping going on! The Index is commendably deep and the detailed Table of Contents doesn’t merely list chapter titles but also highlights, adding an uncommon layer of depth.

Also uncommon is the publisher’s answer to those readers who prefer to remove their dust jackets which has obvious advantages but incurs the penalty of loosing the information on the jacket flaps: it is actually printed here on the inside covers; and the outside covers and spine have the same images/treatment as the book jacket. Clever, but even Schiffer doesn’t do this routinely.

Pocock may feel he has said everything that needed saying about the U-2 but fortunately he’s not done writing about aerospace and especially intelligence topics (or, for that matter, air cargo which was his original field after getting a degree in history and political science).

Calling this book the “definitive” treatment is not at all hyperbole!