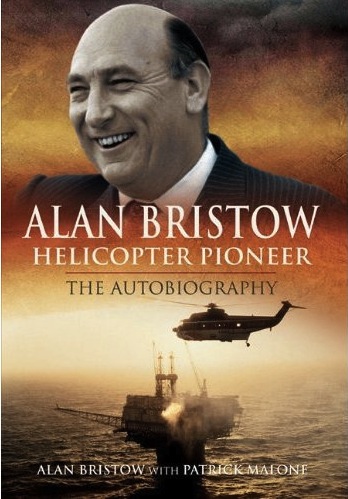 by Alan Bristow and Patrick Malone

“I have put a lot of backs up and disjointed a lot of noses, physically and metaphorically, and in an era when most companies are controlled by risk-averse men in suits shuffling other people’s money and creaming off their cut, my way of doing business is perhaps an anachronism. But by god, it was fun while it lasted!”

Even if helicopters are not your thing, read this book for the sheer audaciousness of its protagonist. If you have an interest in (British) politics, realize that it is Bristow’s role in the “Westland Affair” that embarrassed the Thatcher government and almost caused its fall. And if you’re against whaling, realize that it is Bristow who patented a helicopter-borne humane whale killer.

After a life full of almost Münchausenesque adventures, Bristow exited life with the same drama he lived it: he died seven days after completing this autobiography. Helicopter folk will without fail recognize the name Alan Edgar Bristow (1923–2009) OBE, Croix de Guerre, and a Fellow of the RAeS. He was indeed a pioneer of the rotorcraft community as well as founder and from 1954–1985 managing director and then chairman of one of the world’s largest commercial helicopter services companies. If you’ve read the novel Whirlwind by James Clavell, a lifelong friend, you have already, possibly unknowingly, encountered Bristow whose real-life 1979 extraction of his staff and helicopters from under the noses of Iranian Ayatollah Khomeini’s Revolutionary Guard was the basis for that book.

Over the course of a year Bristow co-wrote this book with former Fleet Street journalist and newspaperman Pat Malone, also a fellow helicopter pilot and publisher of aviation magazines. In books that are co-written with a professional writer it is impossible to know whose voice it is we hear. In an autobiography this is an especially critical factor. Bristow was, to say the least, a polarizing man—a reputation he relished. The book gives many, and unapologetic, examples of that but the writing is probably more articulate, more charitable, and less blustery than if Bristow had done it on his own. But then, that’s the whole reason for bringing in a professional. At any rate, at the end of the book a reader will probably be rather torn between liking and loathing the man. And Bristow would probably have relished that too. Not the he was callous or antisocial. But he had that sense of superiority that is inevitable in someone who is good—and knows he is good—at what he is doing. Typical flyboy swagger. Add to that a few million Pounds in the bank and you have someone who walks tall and doesn’t sweat how many toes he steps on. Besides, since his early sailing days he was a short-fused boxer at heart. Punch first. Ask questions later.

The story—and the tone—are engaging from literally the first line (“Rarely does a single catastrophic blow kill you.” Who wouldn’t want to go on reading?!) A biographical work obviously has to dispense a certain amount of dry fact: names, dates, places but overall the book is written with the pace and dramatic flair of a novel. Early years of life, merchant marine/military service, flying experience, business exploits, career achievements. People who read (auto)biographies so as to learn from other people’s great life lessons will have to internalize that many of the things that would lead to Bristow’s greatest achievements were entirely not of his own active doing. He couldn’t have cared less for helicopters, for instance. Like any self-respecting fixed-wing pilot of his age he had nothing but disdain for the newfangled whirlybirds. After earning his wings, in Canada, and itching for a glorious future as a Spitfire/Seafire fighter pilot with a dame on each arm, his CO surprised him and three of his best friends by “volunteering” them for helicopter training, in New York state. Nothing to learn from this, except how to grin and bare it and make lemonade out of lemons. One thing he does not disclose is where his legendary drive came from. He specifically credits—if that’s the intention—his mother with being the force behind his father’s otherwise directionless and ambitionless career that would see him attain the lofty position of Senior Naval Officer to His Majesty’s Dockyards in Bermuda. But it remains unspoken if he was inspired by her machinations or resented her for not letting his father be his own man.

There is no point in relating further particulars of Bristow’s life here—let the book do that—but let us tell you a few things the book doesn’t. Upon the first anniversary of Bristow’s death the Royal Aeronautical Society held an “Alan Bristow Memorial Lecture” in realization of how much today’s global commercial helicopter operations owe to his extraordinary vision and entrepreneurial spirit. Three people closely associated with him spoke about his legacy: the co-author of this book; Capt. John Black who is now an official with the European Helicopter Operators committee and was a 30-year veteran as Managing Pilot and Head of Worldwide Flight Operations for Bristow Helicopters in Nigeria, Egypt, Iran, and the UK; and Stephen Bond, one of his main competitors for many years, and now Group Chairman of Bond Aviation Group. So, from coworker to business rival, love him or hate him, Bristow was respected and this book tells you why. It is a grand thing that someone had the bright idea to write it. Just in time, as it turned out.

The b/w photos are bundled into three sections and concentrate on helicopter operations and key people, and there is a detailed index.

Harry Truman’s Excellent Adventure: The True Story of a Great American Road Trip »
« Porsche 917: The Heroes, the Victories, the Myth