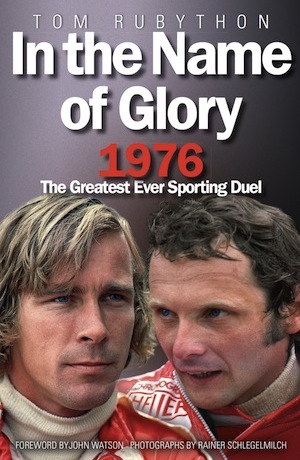 In the Name of Glory is by an author called Tom Rubython about two racing drivers, one called Niki Lauda and the other called James Hunt, and their duel for the world championship during the 1976 season. That one begins to grit one’s teeth after about the third or fourth or fifth time that someone is “called” by their name in this book is not sufficient reason alone to avoid reading it. It is, however, an early indicator that it is entirely possible to make what should be one of the more interesting and exciting seasons of the Championnat des Conducteurs du Monde into something that one would expect from a 14-year-old fan rather than a supposed well-established journalist specializing in the motor racing scene.

During the 1976 world championship season, there were so many twists and turns of fate that even with the passage of nearly four decades they seem almost improbable and still beggar belief. The two protagonists, Niki Lauda and James Hunt, and their teams, Ferrari and McLaren respectively, witnessed so many ups and downs during the season that it was almost a relief when it was over so that things could finally be sorted out.

In the Name of Glory is a rather standard race-by-race account of the 1976 season distinguished —if that is the word—from other similar efforts by its inclusion of the usual race gossip and more than we ever wanted (or wished) to know about the private lives of Lauda and Hunt. While it is certainly true that what happens away from the track often affects what happens on or at the track, a little goes a very long way. That Rubython details Hunt’s drug use and Lauda’s marital issues is not in and of itself a problem, simply that, well, a little bit does go a very long way—we get the picture, time and again. Next, please. . . .

Even a somewhat standard approach to a season can be interesting and highly readable if well written and informative. Unfortunately, In the Name of Glory is rarely either of these. The writing is clunky, repetitive, often amateurish, even insipid. (Odd, considering that Rubython also penned a bestselling Senna biography that racked up over 60,000 sales so far!) While the focus is, of course, on Lauda and Hunt, most of the rest of those on the grid tend to be merely bit players in the drama, more often than not lurking in the background until Rubython has some tidbit or morsel of gossip or remark that he wishes to impart.

There is, surprisingly, little context regarding the 1976 racing season itself. Unfortunately, the author, called Tom Rubython, rarely rises to the occasion and one can only eke out a broader view of the season through something of a haze of allusions. The workings of the Commission Sportive Internationale (CSI), so important to this story, are only barely touched upon by the author called (you see how annoying this gets?) Tom Rubython. Given the pivotal role that the CSI played in the turbulence that occurred during the season it is inadequate that its functions get relatively little attention outside peripheral mention regarding the various hearings.

In the end, In the Name of Glory falls short of even being adequate grist for the Formula 1 fanboyz to peruse. The hyperbole of the subtitle, “1976, The Greatest Ever Sporting Duel,” seems rather exaggerated to say the least, as exciting and fascinating as the 1976 season may have been, both then and now. This is a deeply unsatisfying book, seemingly dashed together from material borrowed from Rubython’s previous book on James Hunt (Shunt: The Story of James Hunt, The Myrtle Press, 2010) and whatever he could dig up on Niki Lauda.

There is a fascinating and amazing story in the 1976 season, but that story remains yet to be told—by someone else. The photos, incidentally, are by Rainer Schlegelmilch.

Cinelli: The Art and Design of the Bicycle »
« The Flying Wings of Jack Northrop, A Photo Chronicle