Pioneers, Engineers, and Scoundrels: The Dawn of the Automobile in America 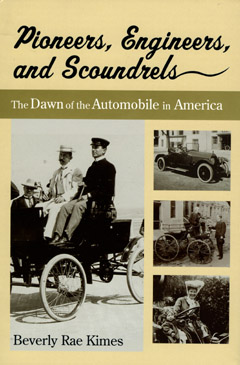 Think about it. Birthdays mark the more-or-less-successful achievement of surviving another year. Some do find more celebratory ways to observe these anniversaries of survival than others. Case in point: SAE (Society of Automotive Engineers) observed its 100th birthday in 2005 and, among the ways it chose to observe its centenary, it published a book. More to SAE’s credit, it wasn’t a self-centered book about itself but rather a seminal tome about the very beginnings of the auto industry—authored by a very special person with an impeccable reputation for careful research and equal care with the writing.

That stellar author was Beverly Rae Kimes (1939-2008). Some of you reading these words may not be familiar with Ms Kimes. But look in nearly any issue of Automobile Quarterly—if her name isn’t on the masthead under “staff” (and even when it is), look for articles with her byline. They are, simply and irrefutably, among the best—the best researched, the best writing of the best-told stories and articles. Then there are the Krause published Standard Catalogs—Bev Kimes’ name is prominent as one of those who made these publications not merely possible, but a reality. There’s more…but you get the idea.

In Pioneers, Engineers, and Scoundrels she has told those best stories in another way; weaving the early days of automobiles and automobiling in America into a whole that enables the reader to easily understand which events and developments were happening when and when they were concurrent or paralleling one another. As her book traces the morphing of the horseless carriage into real automobiles, she reveals the people—rascals and even those less colorful, more pedantic—who made it happen.

SAE, the publisher, merits a scant mention in the narrative mainly because the organization was understandably every bit as young as the fledgling industry, yet both are inextricably intertwined. The men, with names recognized and associated with one car or another, were often the same men who were influential officers of this then-new professional organization. Examples include the first president of SAE, Albert L Riker, the chief engineer who developed the Locomobile’s gasoline engine. Cadillac’s Henry Leland was SAE’s president in 1913, which was (irony or not?) the same year that his allegiance (employment) went from GM to Ford. Regardless of which manufacturer he served, during his SAE presidency Leland toured Europe. Upon his return he warned any who would listen to him that Europe, “would soon erupt and America should be ready.” Leland himself would be ready, willing, and able—as evidenced by his work developing the Liberty aircraft engines.

Kimes conveys her reader back into the 1920s. Then, by the time she and her reader arrive at the epilogue, there’s the neat ribbon she has tied around the entire package that resolves the stories, the careers and lives of each of those key automotive pioneers. Equal kudos are due to Kimes for the writing and to SAE for publishing. The reader is the ultimate winner.

Flywheel, Memories of the Open Road »
« The Spirit of Competition