My Father the Car: Memoirs of My Life With Studebaker 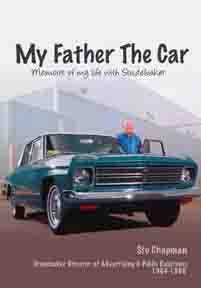 North Americans have always known about Daimler, or Daimler-Benzes after these two amalgamated in 1926. However, in spite of Max Hoffman’s best efforts, it wasn’t until the company, by then called Mercedes-Benz, made an arrangement with Studebaker that it really achieved more than just a toehold for its cars in the Canadian and American marketplace.

A select group of individuals had an early hint that this particular book was in its design and production phase, and only months away from reality when author Stu Chapman, exhibiting proper snowbird behavior, visited from his not-far-from-Toronto home the members of the John Ebstein Chapter of the Avanti Owners Association International in Florida. Now Chapman’s Studebaker book is a reality. And since his book is a memoir, it will help if you understand where Stu Chapman fits into the Studebaker story because this is precisely why this book is worthy of your time and attention.

Chapman worked for Studebaker for only a trio of years. Actually his employer was Studebaker of Canada Ltd. which is a good thing as the Canadian arm of Studebaker remained viable and operational longer than the US “parent.” Chapman began as the Assistant Advertising and Public Relations Manager in the summer of 1963. The first quarter of 1964 he rose to Acting Advertising and Sales Promotion Manager and before the year was out, he was elevated yet again to Director of Advertising. Of course all that came to an end in 1966. But during that trio of years Stu Chapman gave his all, trying to help Studebaker find a route that would enable it to survive.

When it all ended Chapman found he “had inherited files, memorabilia and a thousand memories” which he shares on the pages of his book. The basic history has been recounted in other books and articles, but there is always more to be gained from hearing or reading it again, especially when it is from a fresh perspective and the perspective is that of a true “insider.”

Chapman’s Studebaker story, and his book, doesn’t conclude with the company’s 1966 end. Today he’s active in the Studebaker’s Drivers Club, which he has previously served as its national president. He and his wife of 53 years enjoy driving their 1964 Daytona convertible, the latest in their succession of collectible Studebakers. He has also served on the Board of Trustees of the Studebaker National Museum, working on the Capital Cost Committee to raise funds for the new (current) building, which today recognizes him as an Honorary Life Trustee.

Chapman tells of his experiences with equanimity and humor, even as events at Studebaker soured. Only one person is mentioned (several different times) with scorn. But you’ll have to read the book for yourself to learn both this person’s identity and what’s behind Chapman’s enmity. Suffice to say that it’s not related to either Loewy or Avanti and both do figure into the narrative several times, on numerous pages.

The concluding chapters bring the author’s story current, to the present day. In one, the 22nd, Chapman visits the former Studebaker of Canada buildings and property in Hamilton, Ontario. And in another he talks about his involvement with the Studebaker National Museum in South Bend, Indiana. And in the last chapter he shares some of his thoughts, based on his career experiences, on the current automotive manufacturing companies.

This book is an interesting read of history as seen and experienced by its author. If you have any difficulty obtaining a copy, the Avanti Owners Association International can help. Look for the online store tab that’s down the right hand side of the homepage.