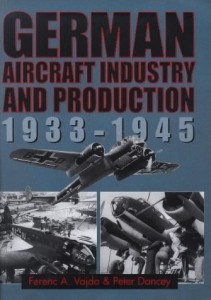 This book is a compilation of statistical data gathered from German archives and previously published material. While the book is certainly not for everyone, it does contain a huge quantity of information. The authors’ conclusions in Chapter 12 on why Germany was destined to lose the air war are alone worth the price of the book.

Co-author and primary researcher Vajda was born in Hungary and originally followed a career in engineering before becoming an aviation historian and writer. The other, Dancey, joined the RAF in 1957 and, after co-authoring this book, has gone on to write several more books on aircraft, his last appearing in 2008. Together they have assembled a textbook of what happened to the German aircraft industry from 1933 (near zero production) to the end of the war (near zero production again).

The 13 chapters in this volume gather everything currently known about Germany’s aircraft production before and during World War Two. The book is comprised of organizational charts (16), maps (15), graphs (9), original aircraft drawings (42), original documents (10), production tables (144), and pictures (82), plus Annexes A through G, and a useful but undersized Index.

Scattered amongst the charts and graphs are roughly 100 pages of well-written text describing conclusions that are logically inferred from the assembled data. Also included are informative descriptions of all 25 approved German aircraft manufacturers, where the companies came from originally, and who their chief designers were. Included are listings of the 422 different types of aircraft the various companies designed and constructed before and during the war, from gliders to rocket planes, and which companies were best at building specific aircraft.

The authors argue that Germany’s defeat was unavoidable from the very beginning due to the bureaucratic ineptitude in the German Air Ministry, a crippling shortage of aircraft fuel and strategic materials, and the lack of dedicated mass production facilities made worse by the dispersal of subassembly and manufacturing firms to escape damage from US and British bombing attacks.

Other conclusions the authors draw: 1) the Battle of Britain was lost before it started due to “lack of materials, no heavy bombers, the low offensive and defensive capabilities of the medium bombers and their insufficient numbers and not enough fighters, with those available having inadequate range.” 2) The famous and feared Ju 88 bomber experienced over 250,000 technical changes during its development prior to production, and by 1940 more than 50,000 modifications to approved production line aircraft were forced on the industry by the German Air Ministry, crippling output. 3) Before the war started the German Army, Navy and Air Force agreed that they would not be ready from a materials and equipment standpoint for war until 1943. 4) The growth of Germany’s illegal prewar armaments industry was financed in part by DuPont, Imperial Chemical, Dillon Bank, J.P. Morgan, Rockefeller and many other US, British, and French financial institutions. 5) In 1935 the British quietly and illegally sold the Germans examples of advanced British supercharged military aircraft engines that were then used as technical templates to build supercharged German aircraft engines. 6) Hitler was so concerned about not stopping civilian goods output during the war that Berlin’s TV station kept broadcasting until 1944. 7) The Flugzeug Ratetan R4M Orkan air-to-air missile shot down 400–500 Allied bombers at the war’s end in late 1945. And the list goes on. If you find this sort of almost random information interesting, then you will find the book worthwhile.

Although distributed in the US by SAE, the design of the book was done by Airlife Publishing Ltd. in the UK, so the appearance is good and the book is typeset in an easily readable typeface. More of a reference book than a popular book, but a book still worth having if a detailed overview of the German air industry between 1933–1945 is of interest.

Posted Under: Aviation, History, Military, Out of Print, Technology | Author: Bill Ingalls | No comments yet