Art of the Formula 1 Race Car 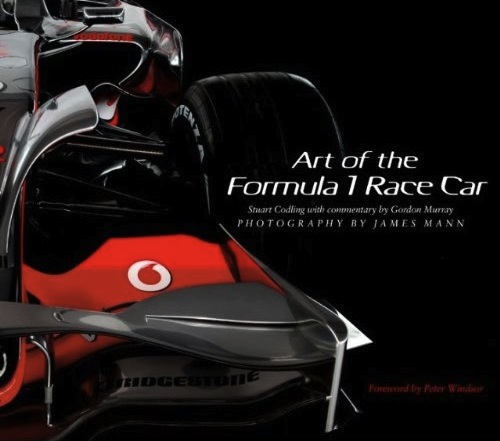 Racecars have a purpose and that purpose is speed not beauty. But beauty is not the subject of this book, art is. Bandying these terms about sounds almost flippant but there are serious distinctions and they merit deep thought. While this book is dripping with mouth-watering photos the text is no less compelling in the “form over function” debate.

In most books, the Foreword is an utterly banal exercise of having a marquee name wax more or less eloquently about something more or less (usually less) related to what the book is about. Not so here. Peter Windsor—who at the time he wrote it was still on track to field his own US F1 team, now aborted, for the 2010 season—does himself proud with an insightful commentary that goes right to the heart of the matter: “If [F1 cars] happen to look pretty then surely that is serendipity.”

Written by an F1 photojournalist and motorsports veteran, the book portrays 18 Grand Prix cars from nearly 60 years of Formula 1 history in text and photos. And what photos they are!

This is probably the first time ever that several F1 cars were rounded up for a studio shoot which allows them to be shown under uniform conditions and in similar “poses”: ¾ front or rear, cockpit, full-on front and rear, engine bay, detail shots of specific coachwork or engineering features, overhead, and profile. Most of them are large and the book, incidentally, is in landscape format. Ace photographer James Mann photographed the cars in three different studios (and the McLaren conference room) in the UK in front of a uniform black background and with a stand-mounted 21 megapixel Canon 5DM MkII set to 20-second exposures. The black background plays into the “art” theme, presenting the cars in an other-than-normal environment and thereby forcing the mind to disassociate the cars from their role as cars but dealing with them as contextless objects. The mind is a tricky thing, a creature of habit and of filling in the blanks. It needs help or, less politely, it needs to be manipulated so as to see things with the proverbial “fresh eyes.”

Since this book is showcasing serious photography by a serious photographer it is puzzling to note an inexplicable randomness: some of the full-page photos bleed whereas others have white borders on two or even four sides. The latter is, to say the least, a distraction especially when it occurs on opposing pages, and the overall effect is one of uneven visual balance. If there was a reason for it, even if it was intentional, it should have been explained. People do notice these things!

The narrative for each car is augmented by, usually, two period photos, in color or b/w depending on the era, and a data panel listing first and last championship GP, wins vs. races entered, wins by location/event/year/driver, and engine configuration/s. The lively text covers basic aspects of history and technology and specifically speaks to issues of design. Sidebars for each car contain additional commentary by Gordon Murray who had been chief designer at Brabham, added the McLaren F1 road car to the automotive lexicon, and nowadays runs his own design company. The scope or focus of his commentary varies considerably; most are insightful but a few are almost perfunctory. It’s not clear if there really wasn’t anything special to say about certain cars (unlikely, no?) or if he just couldn’t think of anything to say.

The criteria by which these 18 cars were selected for inclusion are not discussed. Availability and their owners’ willingness to allow them to be shipped to the studios must have had something to do with it. Each is interesting and has features that lend themselves to the form/function exploration. They’re not meant to be compared to each other but to illustrate the book’s premise. If they have something in common it is that each, despite their entirely different technology (function)—front-engine, ground effects, turbocharged, aero package—are executed and packaged (form) in a way that must be described as artful, and occasionally beautiful.

The Index lists people, cars, as well as all the GPs mentioned in the text. Not every book that uses black backgrounds or borders shows fingerprints; this one does. A lot! In terms of color, type, and layout the book is very smartly designed. Nice touch: the title is printed on the front cover in raised lettering, as if on a tire’s sidewall.

The Engines of Pratt & Whitney: A Technical History »
« Peace was Their Profession—Strategic Air Command: A Tribute