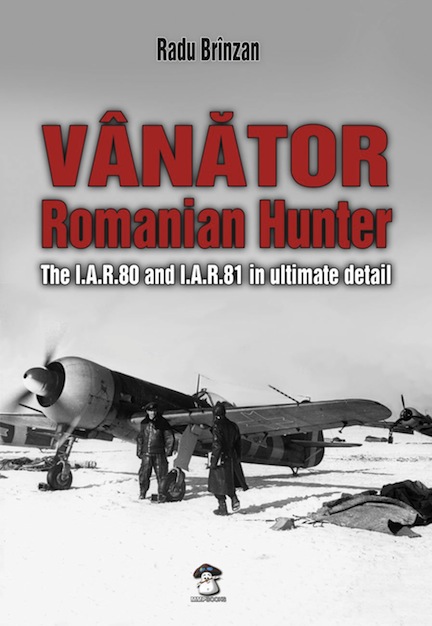 “Placing the above-mentioned tallies in this context makes the I.A.R.80/81 one of the most effective fighter aircraft used by the Romanian air force in WWII. Considering that it was the third largest on the Eastern Front after the Russian and German, one would expect this aircraft to be world-famous. Why is it not?”

Why indeed? Some reasons are obvious and circumstantial (read: Iron Curtain politics) and others not so much, cf. one of the aircraft’s designers who later rose to General Director and after the war went to work for Martin Marietta in the US dying in 1980, just at the time when interest in this good-looking machine was beginning to percolate again.

At any rate, the aptly titled Introduction “The Most Famous Fighter You Never Heard Of” offers plenty of reasons. Western readers may simply not really apprehend in just how precarious a political quagmire the small country of Romania was, struggling to remain neutral while beset by internal and external strife. Author Brînzan was spared the wartime turmoil but, being born in 1971, not the postwar wholesale rewriting of history the Soviets practiced until the Iron Curtain fell in 1990. Specific to this aircraft’s story, the official Romanian/Soviet take on WWII was that it didn’t start until August 1944 when Romania joined the Soviet Union in the fight against Germany. And by that time, the I.A.R.80 fighter and 81 multi-role dive bomber were practically obsolete because their engines could not keep up. In fact, the whole company shut down only weeks later. 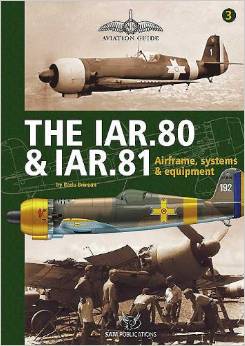 While there do exist a few good books on this aircraft they are older and not in English. The author himself published on this subject as recent as 2011, The I.A.R. 80 & I.A.R. 81: Airframe, Systems & Equipment (SAM Publications, ISBN 9781906959197). That 128-page book was quite thorough and very well received so when Brînzan says that this new version, at three times the size, contains additional information about “a number of discoveries” made since then, he is understating the case.

Even for a publisher like MMP whose stock in trade are books with a focus on technical development and oriented towards the scale model builder the amount of detail offered in this new book represents a new high. At a $120 it also represents a new high price, but this is not meant as a criticism—twenty years of work must have their price.

No original or complete example of the 450 machines built survived past 1955 (there are replicas in museums in Bucharest but both have dimensional and other inaccuracies) so it is a formidable accomplishment that the author and his collaborators have been able to create supremely detailed scale drawings mainly based on photos and archival sources such as manuals and parts books. It helps, of course, that Brînzan is in the business, an award-winning modeler who runs RB Productions out of West Cork, Ireland where he produces micro tools for the modeler, photo etched parts and custom decals, and offers painting paraphernalia such as brushes and masks. He also designs conversion kits that allow you to customize scale models and in fact just last year created a I.A.R.81-C kit limited to only 100 sets in 1/32. 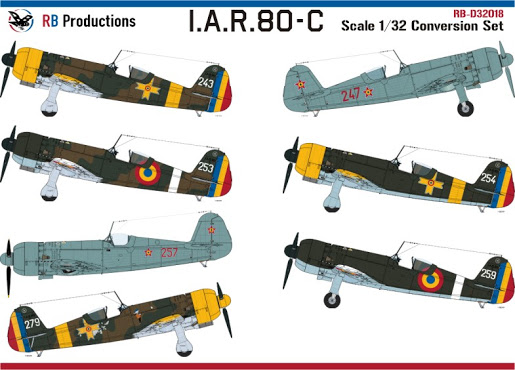 So, this book’s aim is “to describe the aircraft in as much technical detail as possible, concentrating on all aspects such as structures, systems, and weapons.” It does exactly that, and in what the subtitle rightly calls “Ultimate Detail.” Every flap, every duct, every engine mount, every instrument; 15 pages on wings, 3 on headrests; tools, flight gear, markings. Appended are notes on replicas, a pronounciation guide (there are eight vowels in Romanian!), air force units/structure/ranks, a 1923–1960 timeline, Glossary and Bibliography, and 15 pages of color profiles.

Almost all the technical drawings are 1/48 and you can judge the attention to detail by the fact that, where applicable, landing gear is shown with three datum lines to reflect different stages of compression! They do not show individual rivets—but Brînzan records that a 1941 price list specifies 7,315.

In its day, the I.A.R.80/81 didn’t have a nickname. When you’re done with the book you’ll agree that Hunter is just fine and you’ll be happy that someone took the time to not only tell its story but do it in such a thorough way that no one needs to revisit this topic any time soon.