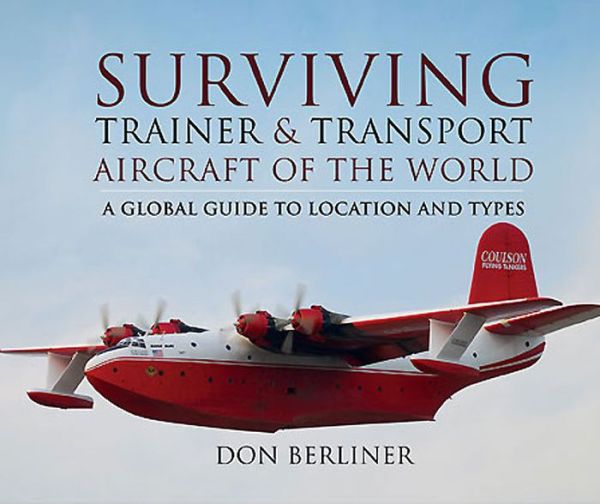 This is the third and final installment of the author’s catalog of vintage aircraft a globetrotting aviation enthusiast could visit in person at a museum or other collection. While vols. 1 and 2 had the words “of World War Two” in the title, vol. 3 only says “of the World” which is probably because the kinds of aircraft considered in this book, unlike the fighters (vol. 1) and bombers (vol. 2), are likely to have had a service life outside of and beyond whatever war application they may have had.

All the comments about methodology and organization enumerated in our reviews of the previous books apply here too and the reader is encouraged to read those because they point to certain difficulties in the usability of the material offered. Vol. 3 is, in fact, even more hampered than the others by the lack of an Index and the unclear division by utility or purpose because the aircraft (fixed—including gliders—and rotor wing, and both manned and radio-controlled) discussed here are likely far less known among general-interest readers. Even the more specialized readers will probably discover types here they may not know very well or at all—provided they happen to stumble across them by random paging through the book. This is the key problem: there is little chance of finding anything intentionally because you wouldn’t know where to go looking for it.

On the surface, dividing the contents by an aircraft’s primary role and within that by country is obvious and self-explanatory, and—seemingly—unambiguous enough. In the case of the US arsenal, the craft are then presented by type number; if you know, for instance, that there was a Skytrain and a Skymaster and a Skycar you won’t find them by that name but only if you also know that the former is the C-47 and the latter the C-54 and C-65. Now try doing this with a Japanese or an Australian plane! What are the odds you know those numbers? This is further compounded by the fact that no country had better naming/numbering conventions than the US, and even those are, on the micro detail level, confoundingly arbitrary. As to the other point, i.e. separating aircraft into individual chapters based on their primary role or function, even that is not quite straightforward. One example would be seaplanes; you’ll find a number of them in the “Amphibian Utility” chapter—but then you’ll also come across them in other chapters where you may not have thought to look. But, these are not hurdles that can’t be overcome. If nothing else, they encourage, and reward, repeated passes through the book.

In terms of core facts, specs, and basic summary of developmental and operational detail, this book and its two companion volumes are just the sort of handy, competent guide they set out to be. Do realize though that they don’t present all aircraft but only those that survived, be it as rusting wrecks or fully restored to airworthiness. This, after all, is the primary purpose of the trilogy: to account for the whereabouts of the survivors. On that score, the level of detail is most commendable and Berliner lists at the end of each aircraft description the survivors’ variant, serial number, and current location. As we opined before, it would seem likely that there must be more aircraft in more places than the ones listed here. Appendix 2 lists museums with large collections in the US, UK, France, Belgium, Italy, and Poland. Appendix 1 offers a list of “Extinct Other Types” and is probably only useful to the hardcore specialist.

Given the obscurity of some of the craft discussed it is all the more the pity that not all are illustrated. And what photos there are, are on the small side (quarter page; the book is in landscape format) and none are captioned. It appears that all/most b/w photos are period ones and the color ones more recent. Since the book has five blank pages at the end, space was presumably not a factor in omitting captions or an Index.

A final comment would be that one cannot shake the feeling the book was either rushed to production (there are quite a number of typos, missing words even, and several proper names in foreign languages are misspelled) or that the author was not entirely comfortable with covering these particular craft. He is a prolific writer and very active in aviation matters but none of his previous books have dealt with transports. At times he almost apologizes for covering such “unsexy” aircraft at all, trying to make the pill easier to swallow by pointing out, rightly and obviously, that without trainers no pilots would have learned to fly and without transports no one would have been resupplied. One should think that no serious aviation enthusiast requires such an apologia.

If you already have the previous two books you’ll pretty much need to have the third one, not just to complete the set but because, as volume 1 already laid out, volume 3 ties up some loose ends regarding fighter or bomber aircraft that didn’t specifically fit the other books. Together they cover more than 300 airplane types and if you are, in fact, someone who frequents aviation museums these books are your only comprehensive, one-stop guide to many of the survivors.

Under Their Thumb »
« Just One Evil Act