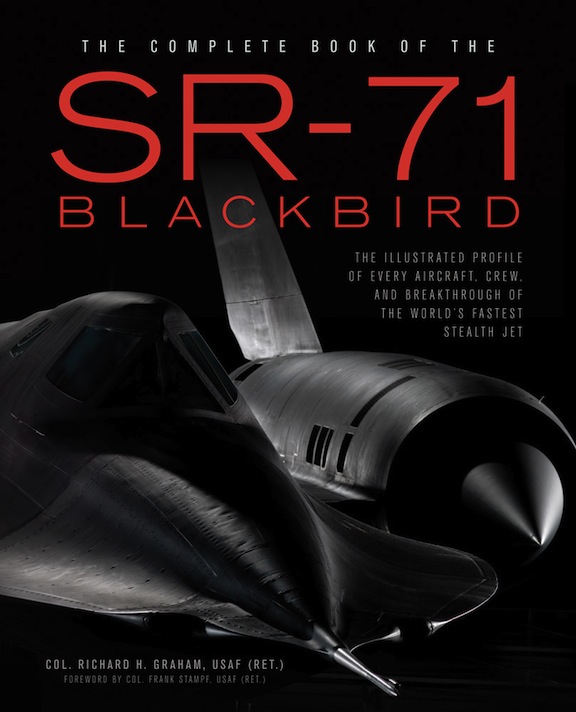 This is the fourth book on this subject by this author and it does just what the subtitle says, and better than any book before it. We ended the review of Graham’s last book, Flying the SR-71 Blackbird (2008) by saying that surely he had another one in him. In many ways, the new book makes the operation (flight behavior and piloting) of this staggeringly complicated aircraft more accessible to the non-specialist than any other book to date. And the Blackbird connoisseur will find at least a few totally new photos here and quite a number of the very well known photos reproduced better (i.e. larger; the book is 10.2 x 12.8″).

The Blackbird literature amounts to quite a tall stack, with several of the books written by SR-71 personnel. What distinguishes Grahams’ is that his career spans the entire arc of a pilot’s career from joining as a pilot trainee to commanding the whole outfit. This means that from the engineering to the flying to the admin side, he has a large frame of reference few can match.

What Graham covers here has been declassified for years now so one wonders why it took so long to write this particular type of book? Readers who come from a background of warfighting history (tactics, ops) need to know that this book touches on these matters only peripherally when discussing the Blackbird’s role as an intel asset (including the M-21/D-21 drone combo), especially in the context of the U-2. Likewise, the CIA is covered only insofar as it was the launch customer (cf. design parameters for the A-12, test flights and the like) as is NASA’s later use of the Backbird as a test vehicle.

Like the Concorde, the SR-71 boasts a long list of aviation firsts and a long string of records that, in many cases, have not been bettered since the type was retired over a quarter century ago. More significant than that, it was designed over 50 years ago, with “slide rules and reams of yellow pads” and involved technology that didn’t even exist yet. From stressed titanium to a unique fuel (JP-7) to specially formulated tire rubber, the obstacles Lockheed’s Skunk Works under Kelly Johnson overcame are on an order of magnitude for which few comparisons exist. Graham relates that part of the story in broad outlines but so well that a reader with any sort of imagination will suffer and jubilate along with the protagonists—only to be cruelly stunned to see the just about to go operational A-12 loose its strategic relevance—in fact it was never used for its intended purpose of overflying the Soviet Union—and be replaced with the SR-71. Each individual aircraft is discussed separately (including a table of basic facts such as number [serial, or aircraft, or tail], flight stats, key events, and current whereabouts) but blended into an overall, more or less chronological narrative. Obviously, accidents are part of this story. At least, the efforts on the technology front were not wasted and the Blackbird went on to have a glorious, unmatched career.

Until it was cancelled.

And brought back but not actually deployed.

No other jet-powered air-breathing aircraft can do what it can so it may come out of retirement again.

If it does, with the info in this book you can fly right along because one of the most gripping bits here is that it transports the reader right into the cockpit for all phases of a flight. Actually, it starts before that, at 9 PM the day before take-off, with the required (well, recommend) 8 hours of sleep, through the special high-protein, low-residue breakfast (no toilet breaks once you’re in the spacesuit!), to preflight.

By this point in the book you’ve already been made familiar with all the peripheral factors such as crew and air base selection and operations, and also with the features of the aircraft. You know where things are, what they do, why they were designed this way (except the sensors and cameras which are surely still classified). You appreciate what heat and cold and thin air and superfast airflow will do to engine breathing, metal expansion, control surfaces. You have come to see that the SR-71 really, truly behaves like no other aircraft. You know that you’ll burn the least amount of fuel when you go fastest (!), that it’ll take a hundred miles to make a turn, that you can only descend in specific hops, and that you don’t rocket to 80,000+ feet simply by pointing the nose up. And you’ve been briefed on something that is almost sure to happen in supersonic flight: how to restore full engine power after an inlet unstart—think of it as a hiccup during which the engine stops working. If you are a flyer, or a powerplant engineer, or simply someone who takes joy in humans figuring stuff out, this last aspect alone makes the book an exciting read.

The book is full of things one never thinks about, that even the engineers didn’t think about at first: how an inflated spacesuit makes it impossible to tilt your head enough to see a gauge, or a gloved hand can’t tell a switch by feel, or the light “up there” washing out the instruments. This sort of detail is at the core of the book, and unlike any other book, largely thanks to its generous size, it is able to put relevant illustrations right next to the corresponding text. Cockpit procedures, for instances, are accompanied by graphics of that part of the console that houses the relevant instruments. Photos and technical drawings shed further light on the proceedings. (If you have the previous book, keep it at hand because it reprints the actual step-by-step procedures from the Abbreviated Pilot’s Checklist [ditto the Reconnaissance Systems Officer’s]. The actual USAF publication is nowadays available as a Lulu on-demand item but it is no fun to read, Lockheed SR-71 Blackbird Pilot’s Flight Operating Instructions ISBN 978-1411699373.)

From writing to design, this lovely book shows competence and intent—which makes it all the harder to have to point out that proofreading and editorial QC are abysmally poor. The occasional typo or transposed word? We’ll live. But an entire paragraph of fragged words (p. 130)? NAS Point Magu?? A full-page photo duplicated, with identical caption not 10 pages apart? C’mon. Still, these are “only” packaging issues that have nothing to do with the value of Graham’s book to the reader.

A few sidebars are written by mission specialists. Appended are photos of each crew, a list of everyone who flew [on] the Blackbird, various memos, cockpit diagrams for different variants (one set is unidentified; based on arrangement of gauges it must be an “A” version), abbreviations, and a cutaway.

Even if flying is not your thing, there is no way to come away from this book without a sense of wonder. While peripheral to the story there is another the thing the book describes compellingly: the value of small teams and lack of bureaucracy on “ownership” and trust even among parties that by definition are on opposing ends of the power spectrum (here: government vs industry).

The Complete Book of the SR-71 Blackbird: