A True Story of WWII Italy, the Nazis, and the Cyclist Who Inspired a Nation 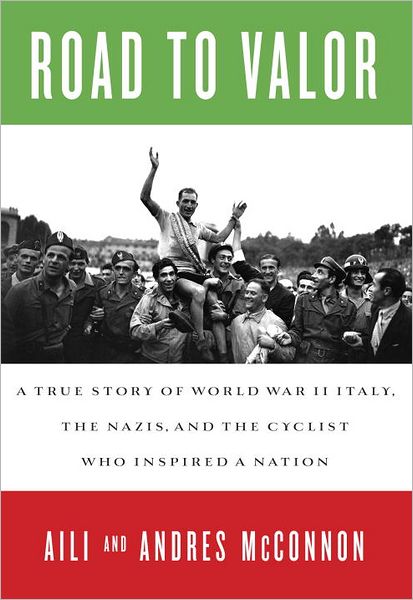 In the 1930s the Italian Fascists were having a sports war with the rest of Europe. Mussolini used cycling as proof of Italian racial superiority, using the winning Italian teams as domestic propaganda tools to help validate the beneficial effect of his control over the country as a whole. Gino Bartali, Italy’s best bicycle racer at the time, was uneducated beyond the sixth grade and came from a small workingman’s town near Florence. He was raised a socialist by his day-laborer father, who cautioned him to lay low in times of political turmoil. Gino disliked the fascists, following instead the dictates of the Catholic Church. Cardinal Elia Dalla Casta, the archbishop of Florence who actively opposed fascist control of the church enlisted Gino during World War II to carry false identification papers to Jews in need, hiding the rolled-up forgeries in the hollow tube frame of his bicycle. Gino’s efforts are credited with saving hundreds of Italian Jews from death in German concentration camps.

This book outlines Bartali’s life and bicycle racing career, with a great deal of effort on the authors’ part to clarify his previously undocumented anti-Fascist activities. The story is a good one. Aili McConnon is a Canadian journalist, and her brother Andres a historical researcher. Jointly they’ve done an excellent job pulling together the facts. Bartali’s wife and family are interviewed (Gino died in 2000), and his personal history traced. The son of the Jewish family Gino personally hid in one of his rental units is interviewed, as are dozens of others who knew Gino well. Yet, the man remains a mystery to me. Anecdotes and happy and sad stories are related, and his volatile personality described through his actions and his quotes, as well as quotes from friends and enemies. But for me, Gino is still an enigma. Beyond all the data, who was he, really? Adding to the mystery is Gino’s lifetime personal silence surrounding the hard evidence of his history in the Italian resistance. This reticence is perhaps the best description of the man. He knows the totality of what he did, but we don’t. Supposedly, his wife never knew either. According to her, he was just away a lot on his bicycle during the war, training, peddling hundreds of miles around Italy to keep in shape. Without the testimony of church officials, and the testimony of the Jewish family he hid, his role would be all but unknown.

What does come emotionally alive in this book are the social descriptions of the local politics and policies of the Fascist Italian government before and during World War II. It is easy to forget, even in those militaristic times, the fear and horror of a war in which an estimated 40,000,000 people died for little more than having a belief—religious or political—contrary to those who held the power of life and death over them. The concept of racial superiority was openly promoted by everyone, over everyone. A revolving mandala of hate that left no one untarnished as it rolled around the world like a plague during the war.

The narrative held my interest throughout, flagging just a bit during the dramatic build-up to the start of the postwar 1948 Tour de France which Gino wins in heroic fashion, repeating as champion ten years after his 1938 prewar win. The claim that without Gino’s 1948 win Italy would have fallen into chaos and perhaps become part of the Soviet sphere of influence is a bit of a stretch, perhaps, but then Italians are often portrayed as an emotional people (a continuing racial stereotype?) so who knows what might have happened. Times were tense after the assassination attempt on Palmiro Togliatti, the Italian Communist Party leader, and Gino’s Tour de France victory certainly united the country in a non-political way at just the right time. Either way, the McConnons tell a good story and back it up with quotes from the people directly involved, including the Italian Prime Minister Alcide De Gasperi.

There is no Index, which is definitely a weak point should you want to back-check a fact or name. For an interesting two-part 30-minute audio interview with one of the authors, Andres McConnon, click here.

A True Story Of World War II Italy, The Nazis, And The Cyclist Who Inspired a Nation

Posted Under: Bicycles, History | Author: Bill Ingalls | No comments yet

The American Highway: The History and Culture of Roads in the United States »
« DS miniatures de mon enfance