A History of the Founding Families and Their Machines 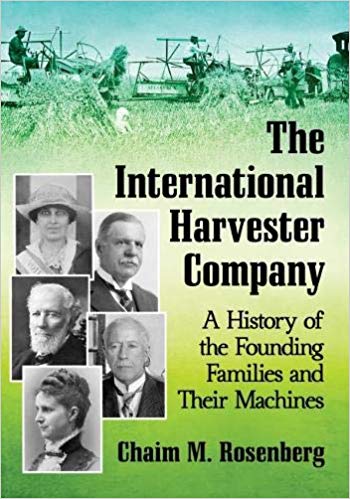 Family infighting, jealousies, schisms and even insanity…whew! No, this isn’t about the newest soap opera installment. Rather it is a deep-dive into several generations of one very real family. Prior books about McCormick-International Harvester have focused mainly on the equipment the company created, constructed, and sold. As this book’s focus is the people, don’t be misled by the title for there’s virtually no discussion of the equipment once the original squabble of whether father Robert or son Cyrus had actually developed the reaper has been related as the subsequent McCormicks at the company helm were “suits” managing the business not engineers developing the equipment that bore their surname.

If you’ve ever been involved directly or peripherally in family squabbles, especially where the dollar and who should have it played a role, you’ll more easily relate to some of the anguish of the members of this family as recounted by author Chaim Rosenberg. It may—or may not—be significant that he is also a trained/practicing psychiatrist! Regardless, he is a clear communicator on the printed page and that makes this a most readable and, yes, fascinating look at the people behind what once was one of the very biggest companies in America—biggest being defined by most employees, most locations, most dealers, along with grossing and netting the most!

While the book thoroughly shows its sources in both bibliography and chapter notes and is well-indexed, this commentator did find herself wishing for a diagram of the family tree with year of birth and death of each. There are so many McCormicks that, no fault of the author, sometimes it was challenging to remember what timeframe each was in. When I reread the book—which will definitely happen one day for it is that interesting and worthwhile—I’ll remember to create such a chart as I go along.

The family story is too involved and covers a greater timeframe than can be summarized here but permit me to at least acquaint you with those whose faces are on the book’s cover.

The dapper mustached gentleman top right is Cyrus Hall McCormick, Jr (1859–1936) who was the third McCormick generation’s first born. His father’s death resulted in his becoming president of McCormick Harvesting Machine Company when he was only 25. He met the challenge well. By 1902 he negotiated his company’s merger with another family-owned firm, Deering Harvester. The new company was International Harvester and CHM, Jr led it into the motorized world.

Upon CHM, Jr’s passing the man whose face appears beneath CHM, Jr’s on the book’s cover, Charles Deering (1852–1927), wanted control of the company but was instead named Chairman of the Board of Directors. It didn’t matter that his father William (1826–1913), whose face is seen middle left on the cover, had established the harvesting machine business that bore that family’s name and been content with being Chairman of the Board of International Harvester. Rather than vie for control the Deering family retired and instead pursued “their passions as art patrons, world travelers and purveyors of the leisured life.”

Next, the two “femmes” on the cover. The side profile face in the lower left is that of “Nettie” McCormick, born Nancy Fowler in 1836. She was well educated, poised, and a resident of upstate New York when, on a visit with relatives in Chicago, she attracted the attention of McCormick, Sr. On the day in 1858 when they wed he was one year shy of 50, she 23. She was a still-youthful 49 when he died but as his last years had been troublesome she had become his business confidant as well as caregiver. Thus in her widowhood Nettie was indeed the family matriarch and helped and counseled her son, CHM, Jr when he ascended to the company presidency. Nettie’s natural inclinations also led her, now wealthy in her own right, to engage in charitable good works, predominately to educational institutions prior to her 1923 death.

The more contemporary femme face is that of Katharine McCormick, born in 1875 as Katharine Dexter. Like her eventual mother-in-law she too was well educated. She wed Nettie’s youngest son Stanley in 1904 but not long after Stanley’s mental and emotional difficulties fully manifested themselves and he was confined to round-the-clock professional care. As there had been no issue from the marriage Katharine devoted her time and energy to causes rather than child rearing. As we see her in the cover photo she has taken a prominent role in campaigning for women’s suffrage and later, after Stanley’s death in 1947, Katharine supported and worked for women’s rights including protecting women from unwanted pregnancies. Toward that end she funded research that led to the birth control pill. She accomplished and influenced much in her life before passing as 1967 drew to a close.

The brief synopses of these faces on the book’s cover are but the “tip of the iceberg” of the interesting people who populated the McCormick, Deering and International Harvester company story. Reiterating, this is not a book about equipment or engineering and only touches on the business details. Mostly it is about people…all are interesting, although some more seriously flawed than others, but none dull. Thus this book telling of them turned out to be a page-turning good read too!

A History of the Founding Families and Their Machines

Posted Under: Biography, Business, Other Genres | Author: Helen Hutchings | No comments yet

Inside the Rolls-Royce & Bentley Styling Department 1971 to 2001 »
« Tony Southgate, From Drawing Board to Chequered Flag