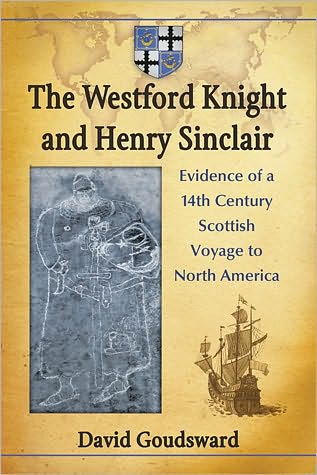 Is a glacial boulder in Westford, Massachusetts America’s Stonehenge? Is what’s on it a carving, a natural feature, a message from the universe? It’s one thing for sure: controversial.

When I picked up this book I hoped it would be an engaging account of a 14th century Scottish voyage to North America. I expected to read about Henry Sinclair, the Earl of Orkney and Lord of Roslin, sailing to Westford where he set up a short-term colony in 1398. But it was not to be. Instead the book turned out to be a summation of the circumstantial evidence surrounding what “may” be the indistinct remains of a chiseled carving of a knight on an exposed ledge in Massachusetts, or perhaps the image is of an American Indian, or maybe just glacial scrapings, or a bored child’s scribbling, or perhaps a slave-era escape signpost, or maybe . . . well, you get the idea.

The story this book tells is that there is no story to tell beyond the chronological listing of the confusion created by amateur historical reconstructionalists. In addition to a lack of a real story, the author’s terminology is hard to follow for general readers not familiar with the nomenclature. Try deciphering this description of a coat of arms: “. . . Quarterly first and fourth Azure a lymphad within a double tressure flory counterflory Gold, second and third Argent a cross engrailed Sable.” It’s as if the author is trying to gain intellectual status for his book by snowing his readers with a blizzard of arcane terms designed to impress those without a working knowledge of the vocabulary. The book regales itself throughout in jargon and un-translated foreign language inserts that only further obscure what is being described. This is a case of where being intelligent enough to read is not going to be enough to understand what is written.

Added to the verbal obscurities are unending amounts of footnoted “proofs” that become tiresome and tedious, destroying the flow of the text. Simply relating what story there is, and the facts as the author sees them, would make the book readable, but far shorter. While the “proofs” are all interesting in their own arcane way, they do little to advance the narrative. Do we really want to read a full chapter of speculation on where Jarl Henry “might” have come from before a descendent 100 years later “might” have landed in Massachusetts? Perhaps a long description of where the word “coroner” comes from would be of interest to you. I admit I did learn a lot I hadn’t known before about the derivation of that word but it did nothing to clear up for me who might/might not have landed in Massachusetts and when they might/might not have done it. Instead, the author dedicates an inordinate amount of text to minutiae surrounding a topic that never seems to arrive. In short, Goudsward takes what should have been an interesting pamphlet and turns it into a tiresome textbook.

Also missing are maps, both ancient and modern, that would help the reader understand where Henry Sinclair was from and where he traveled to if, indeed, he traveled anywhere. (There is no hard evidence, written or otherwise, that he ever did.) Unless you have a working knowledge of the geography of Scotland, Shetland, the Orkney Islands, Iceland, Greenland, along with the eastern Canadian and US coastlines, you’ll be lost in a vague map-less topography of medieval and modern place names.

“May” and “might” are repeated in the text like a mantra to create a world where everything is suspect and doubted. Speculative history becomes all there is for the reader to contemplate as the book devolves into speculating about the accuracy of everyone’s speculations concerning the existence of a 14th century Scottish excursion to North America. The last sentence of the text sums up the book for me when the author writes that the meaning of the Westford Knight carving “may be lost to the ages.” It’s already lost to me.

The book consists of Acknowledgments, a Table of Contents, a Foreword by Robert E. Stone of America’s Stonehenge, a Preface, 15 Chapters followed by an Epilogue, four Appendices, Chapter Notes, a very good and extensive Bibliography, and an Index. The author, David Goudsward, lives in Florida and has previously written articles about genealogy and New England megalithic sites.

The Westford Knight and Henry Sinclair

Evidence of a 14th Century Scottish Voyage to North America

Posted Under: Other Genres, Travel | Author: Bill Ingalls | No comments yet