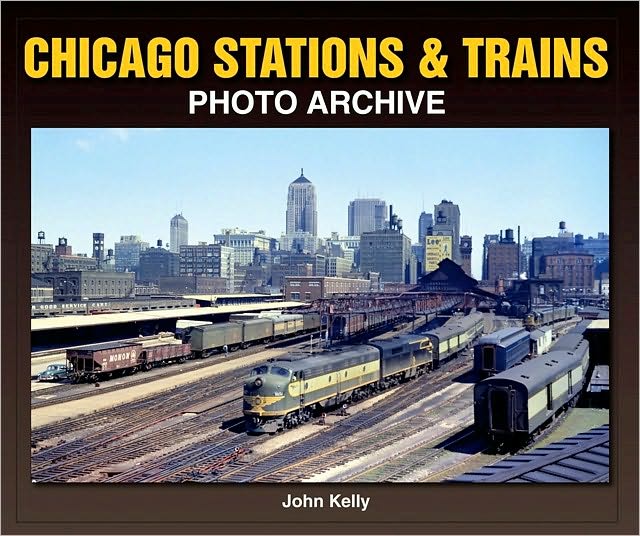 Railroad stations were once the focal center of every city. Local commuter trains and cross-country passenger service intersected to provide a mass transit system that efficiently moved people across town and across the country. In Chicago Stations & Trains, author John Kelly writes, “No other American city had such a fascinating group of railroad passenger stations as Chicago.” His book goes on to detail Chicago’s six major railroad stations and some of the classic trains that served them. Each station had its own architecture, some in the Romanesque, some in Beaux-Arts and many in the Moderne or Art Deco style that reflected the late 1800s and early 1900s when they were built.

Kelly grew up in Eau Claire, Wisconsin where his father’s best friend was an engineer of the Chicago and Northwestern Railroad. This family friend instilled in Kelly a lifelong interest in railroads and he has been collecting photographs, timetables and dining car menus for more than 20 years. As a part of the Iconografix Photo Archive series, Chicago Stations & Trains puts that collection of photos to good use. The book is filled with high quality black and white images of trains and stations, along with maps, advertisements and just about everything else having to do with Chicago’s major urban rail stations.

The architecture of these old rail stations was nothing short of magnificent. Huge passenger halls, maintenance facilities, baggage storage rooms, commissary food service for dining cars, newsrooms, lunchrooms, newsstands, washrooms and passenger seating all wrapped in marble glass and steel with sleek lines and smooth reflective surfaces. They were one of the finest examples of art matching functionality in the service of the public.

Perhaps the most interesting aspect of Kelly’s book however comes from the scores of photographs of trains pulling into and out of those magnificent stations. Steam trains, diesel electrics, streamliners and famous names like the San Francisco Chief, The Grand Canyon Limited, and The Panama Limited are sprinkled throughout the book. Once upon a time, railroad cars, and especially locomotives sat at the pinnacle of transportation style. The beauty of these huge machines, especially the streamlined locomotives that appeared at the end of the steam era, exude a kind of grace and charm that is largely missing in today’s rail transportation options.

Alas, of the six urban Chicago stations that Kelly details in his book, only three remain and only one, Dearborn Station, is still in a recognizable form. Passenger rail service disappeared as automobiles took over the movement of commuters. Kelly provides a eulogy for each of the stations, most of which were razed to provide real estate for office buildings and parking lots. Had we kept these buildings and the transportation functionality that they represent, perhaps we would now be in a better place when it comes to solving our current transportation problems.

Posted Under: History, Trains | Author: Kevin Clemens | No comments yet