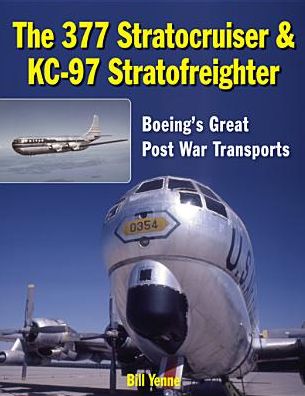 You may well have seen a Strat, even in recent years, without realizing it: the bulbous Guppy with its oversize fuselage for accommodating NASA gear is a variant, so uniquely practical that NASA said they couldn’t have put a man on the moon in the prescribed timeframe without it.

The Strato in this aircraft’s name means it has a pressurized cabin, able to ascend into the stratosphere—30,000 ft to you and me—something Boeing had begun with the B-307 Stratoliner in 1938.

Four engines and a pressurized cabin (and in this case further distinguished by a commodious double-lobed hull) were thought to be the way to rule long-distance, transatlantic flight, both in the civilian and the military sectors. And they were—until the jet came along. Ironically, the jets that made the Strat and its prop-driven colleagues redundant were thirsty beasts, so they required in-flight refueling, so 8 out of 9 Strats were purpose-built as tankers (an industry first), which in turn helped the entire fleet stay aloft a lot longer. 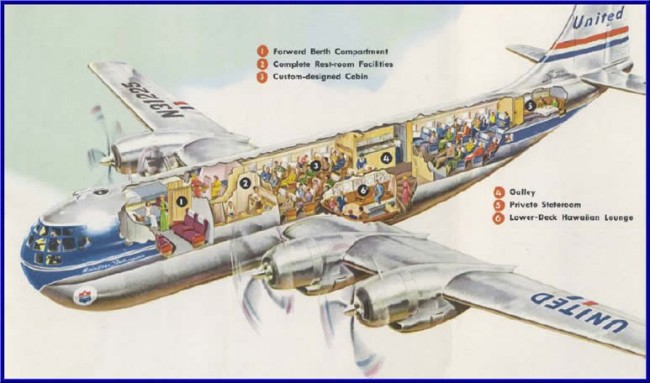 Stratocruiser aficionado Bill Yenne, a seasoned writer with several aviation books to his credit, picks up the story in 1933 with Boeing’s model 247. Having already devoted several books to the histories of different airplane makers gives Yenne a good overall grasp of this crucial time in US aviation history when Bill Boeing still owned an airline in addition to his airplane manufacture. This two-pronged stance accounts for the types of aircraft Boeing brought to market, as much as the subsequent deregulation (the 1934 Air Mail Act) accounts for the strengthening of the firm’s competitors, all of which—not to mention a world war!—contributing to “Tomorrow’s Airliner!” finding itself the last of an era.

Relatively speaking, this is a small book at 208 pages so it is all the more satisfying that it really is not missing anything necessary to appreciate this aircraft’s place in the order of things, its features and operation (one of the ten appendices pretty much let’s you “play pilot” by outlining specific settings and procedures for certain maneuvers, including such exotica as jet-assisted take-off), and service record with various operators including brief National Guard and Guppy stats. There are several exploded views, pages of flight deck instrumentation, tables with names and serial numbers, production stats, and technical specs. Other aircraft relevant to the 377 story are discussed as applicable, as is the unusual 497 “Mothership” variant that would have had a swept wing and six engines—and, like a container ship of the air, would have hauled a detachable 91-foot-long pod full of cargo or passengers! Presented in chronological order the story alternates between civilian and military variants.

While it does talk about survivors it would be outside of its scope to devote more than passing mention to the one of two remaining airworthy C-97s (s/n 52-2718, “Angel of Deliverance”) acquired in 1996 by the Berlin Airlift Historical Foundation and being restored to flight status.

Yenne also writes fiction and biographies so his writing style is engaging and properly thought out. In terms of illustrations too the book is quite impressive and offers a large number of previously unpublished goodies.

Of the several good books about the Strat, this is the one to beat, not least because it is easily the nicest in regards to production values and appearance.