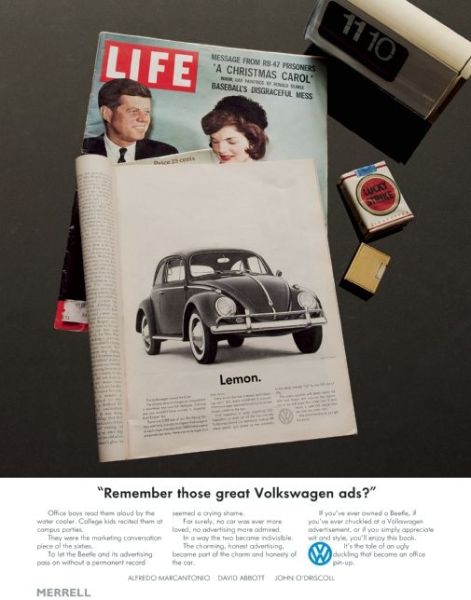 “The irony was, the big agencies’ upright Harvard and Yale graduates were increasingly out of touch with the very people they were trying to influence.

Suddenly, it was the streetwise not the book-wise who were best equipped to communicate with the man in the street.”

If the book title hadn’t already used those exact words, this review would have started with them: Remember those great Volkswagen ads? How could you not, unless you weren’t around in the 1960s and ‘70s. The ads are a cultural touchstone, regardless of your taste in cars.

It was called “the [ad] campaign of the century” and is required reading for anyone in advertising even today, and not just for automobiles. The ads combined humor and honesty in a self-deprecating manner while treating both the brand’s values and the consumer’s intelligence with respect. They were absolutely revolutionary (for automotive ads), and no one has pulled off anything like it again—on that scale and with that consistency.

That this ad campaign is still relevant is evident not least in the fact that this book keeps getting reprinted (first published in 1982), this latest edition being the most expansive yet: larger format, more color, additional detail about the campaign, a new section on billboards and dealer posters.

While it is the Beetle that’ll come to mind first and foremost, this book also deals with the other VWs, from van/bus/camper to Karmann Ghia to fastback and derivatives. Written by folks who all had hands-on involvement with VW advertising (though not necessarily with these ads!) the book begins with a short overview of the basic history—VW, Porsche, Hitler, People’s Car etc.—before turning to marketing considerations, both from a corporate (why do we need to advertise at all? who should do it?) and demographic point of view (who is our audience? why should they care about our product?). 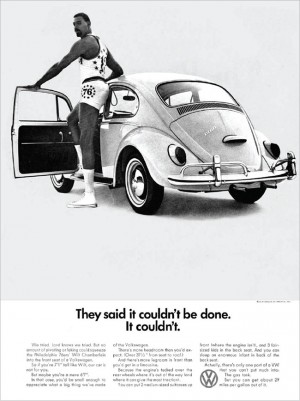 It’ll behoove the reader to be in a 1960s frame of mind: gender roles, race relations, generational shifts, the American Way of Life, conformism, social status. Ponder this: celebrities and possibly even captains of industry stepping out of a Mini Cooper might come across as “hip” but did a Beetle have that sort of cachet? The authors devote some 10 pages to explain, however briefly, the difficulties VW faced defining its place in the world. The only other narrative in the book is in the form of short intros to each of the individual sections.

Now, the authors are Brits and this book deals mainly with US ads (there is a closing chapter about non-US ads) created by the US firm Doyle Dane Bernbach, DBB. Marcantonio was Advertising Manager of VW Great Britain, O’Driscoll art-directed (a term that entered the advertising vocabulary specifically because of the revolutionary methods DBB applied) many British Volkswagen ads, and Abott was a Creative and Managing Director at DDB’s London office. None of the three was involved when the original campaign was hatched and by being UK-based it may be that their paths did not cross those of their American colleagues much, which might account for a certain lack of detail. 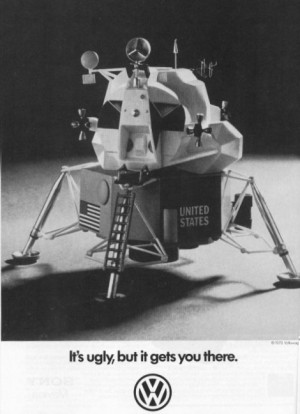 Early in the book, for instance, two pages discuss DBB art director Helmut Krone, an absolutely key figure in setting the tone of the ads and creating the look and copy style of the page. He is here quoted calling the Bug “homely” and “without a future” and was so depressed after doing three ads that he needed a vacation! All true but a far cry from his much stronger statements elsewhere in the media that he was “dead set against the campaign as we did it” and “felt so strongly that we were doing the wrong thing.” In other words, the man behind the ad campaign of the century thought he had a career-ending turkey on his hands! He was also always emphatic in saying that “there was nothing new about the Volkswagen idea, the only thing was that we applied it to a car.”

When you study these ads, especially so many of them together, you do realize how clever they are—and how difficult it must have been to make them look so “easy.” It helps that all ads show the year in which they started but it is not at all clear why they are not shown in exact year order (they are up to five years apart). Not only print ads are included but also TV stills, everything is well reproduced, many are full-page and some even two.

“There’s a surprise in every box” proclaims one of the ads; this fantastically fun book is full of them.

The Art of Space »
« MotorBinder: Classic Photographs from the Golden Age of Motor Racing