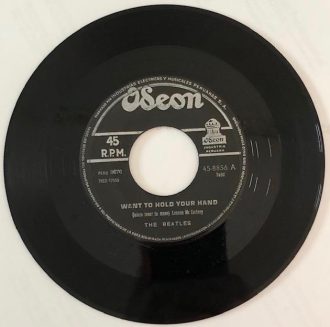 There are at least hundreds of Beatles 7-inch, 45 RPM vinyl records coveted by collectors. And for the hardcore collector, it is the minutiae that brings salivation: Was the Capitol logo found in the fine print of an Apple Release? Are the matrix numbers, those identifying marks found etched into the vinyl after the runout groove, correct—or, better, do they identify a rarity? We are always amused by the fact that one disk is worth thousands of dollars while another, alike in every way but for some obscure difference in font or catalog numeration, is worth only chump change. And if there is a misprint of any kind, well, collectors get quite excited and burn with covetousness. These aspects of collecting will never go away. It just may be the heart of the matter. 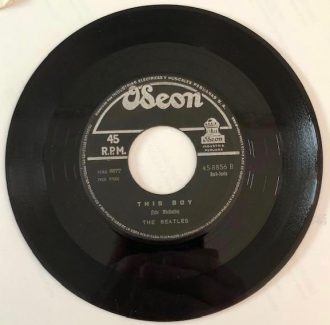 Odeon records was founded in 1903 in Germany. Through the decades it changed hands, and in 1931 it merged with EMI.  EMI—think Parlophone in England and Capitol in the USA. These two labels released recordings by The Beatles. On Parlophone, I Want to Hold Your Hand is catalog number 5084; the Capitol number is 5112 (the Capitol B-side is I Saw Her Standing There). Amazingly, this recording was also released in India and the Philippines (and other places?), on a Parlophone 10 inch, 78 RPM disk! In Germany and in Peru, The Beatles were released on Odeon. Want To Hold Your Hand (Quiero tener tu mano) backed with This Boy (Este Muchacho), number 45-8856,was released on Odeon, fabricado por INDUSTRIAS ELECTRICAS Y MUSICALES PERUANAS S.A. There is no date on the label, but we assume it was released in 1963 along with its sister copies released around the world. There must be millions of disks of this song in existence—it is difficult today to understand how raw, new, thrilling and powerful I Want To Hold Your Hand sounded blasting from AM radios, car radios and record players.* Take our word for it, please: This song captured and delighted an entire generation. Reverberations still linger.

This particular disk caught our eye for a few reasons. One, with no disrespect intended, seeing the titles translated into Spanish below the English has, to an English speaker, an exotic appeal. The disclaimers and copyright protections found in small print on the perimeter of the label are also in Spanish. Another curiosity of this particular example takes us back to an earlier era in recordings. From the 78 RPM recordings from the 1900s to the 45 RPM disks to, at least, the early 1950s, it was not uncommon for the genre of the recording to be listed on the label: Foxtrot, Waltz, Vocal with Orchestra, Instrumental Blues or what have you. You won’t find these on the British and American versions of our target recordings, but on the disk in question, Want to Hold Your Hand is given the designation Twist. The Twist? Chubby Checker and Joey Dee & The Starliters? It is just hard to think of Beatle fans twisting to Want To Hold Your Hand. Dancing the Frug perhaps—but more likely sitting in front of the turntable grooving. Singing along. Or crying and moaning in orgiastic abandon. B-side: This Boy: Rock-lento. Now there’s a phrase we don’t encounter every day. 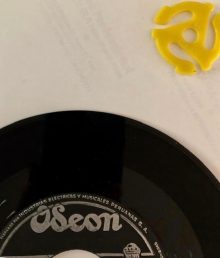 We also like very much the Odeon logo—the columns and dome. The label’s name and logo come from the Odéon-Théâtre de l’Europe in Paris, and this adds a taste of elegance to the label. And, lastly, there is an error; the A-side title is incorrect. You may have noticed that this review keeps referring to Want To Hold Your Hand, but, of course, the correct title is I Want To Hold Your Hand. Also, on the B-side, the title’s translation is in parentheses; on the A-side, only the end parenthesis is seen. An error!  Maybe two!** As mentioned, collectors love mistakes. We found this disk on eBay, and it was inexpensive. A nice, very nice, addition to the collection. So we’ll see you later. It’s time to snap a 45 RPM adaptor to the center hole, fire up the turntable and give a listen.

*For those under 30: Please remember that this mechanical method of reproducing music, aside from radio, was all that we had. CDs and streaming were the stuff of science fiction.

**What if this was a forgery—that someone blackened out the “I” or the “(“ to create the errors on the label ? Would a hardcore collector feel disappointment? There is, after all, the palpable weight of authenticity.
Copyright 2019, Bill Wolf (speedreaders.info).