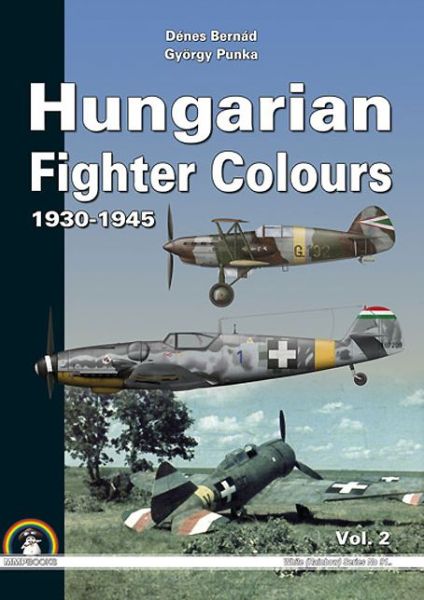 Written specifically with the modeler in mind as sort of an authenticity guide in regards to paint and markings, these excellent books actually do quite a bit more by fleshing out one of the lesser-known chapters of WWII military aviation with extensively researched micro detail.

Not having much of an indigenous aircraft industry in the early days of aviation, Hungary out of necessity operated mostly foreign equipment. You will therefore find aircraft in these books whose names you may well recognize but whose modifications and operational details had not heretofore been uniformly well or reliably recorded. The authors too suffered through this information void themselves, which, in fact, is the reason this book was written at all. 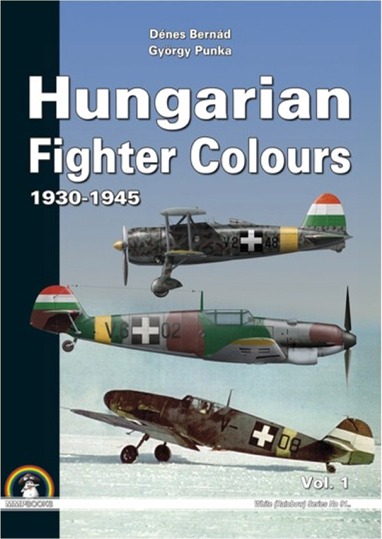 For all practical purposes, these two individual volumes really are, and were obviously conceived, as one book. For instance, the pages are consecutively numbered and each volume has its own apparatus, i.e. there is only one Introduction, Bibliography etc. As a courtesy to the reader who is not Hungarian or already an expert in the Hungarian Air Force, each volume contains a Glossary so as to decipher otherwise unintelligible nomenclature.

Although released more than six months apart, the contents of vol. 2 must have already been locked in at the time vol. 1 was published because each book contains the tables of contents for both. This is unusual but certainly useful, and the only discrepancy is one item in the Vol. 2 appendix that Vol. 1 forecast to be on a different page.

For readers with a large historic frame of reference, reading the authors’ explanation as to “why this book needed to be written” must be poignant: the very events they describe here ended up putting them on the wrong side of the Iron Curtain, a handicap that manifests itself in matters large (no free flow of information) and small (inferior paints that won’t stick to aircraft model kits). Punka, an aviation engineer from Hungary, and Bernád, a mechanical engineer from Rumania struggled through different versions of this, and a decade apart, but Western modelers from the 1950s and ‘60s should realize, and appreciate, how good they had it!

To the modeler, authenticity is a virtue. Accurate dimensions, theater-specific paint, period-correct markings and a hundred other details spell the difference between mediocrity and excellence. Over the many years this book was in the making, wartime personnel has been interviewed, original aircraft parts have been examined (sometimes exhumed first!), period documentation analyzed, and the existing secondary literature evaluated so as to reconcile discrepancies and put the puzzle together in a better way.

After some preliminary remarks about air arm activities in Hungary, volume 1 presents in-depth looks at nine aircraft and vol. 2 another nine (see list below). How they were divided across the two books is not really clear; vol. 2 for instance covers one variant of the Bf 109 of which vol. 1 had already introduced three others. In each case, operational details are discussed first (minimal reference to technical aspects) and then camouflage and markings. Illustrations abound and there is a lot of unusual material here, such as pages from Hungarian manuals and photos of actual stencils! The captions are splendidly thorough but predominantly focused on paints and markings.

If you are into books like this, you know that it is the color profiles that are their real raison d’être. Several dozen side and top/bottom views by five illustrators are showcased here. All the profile views (often accompanied by a photo of the exact same aircraft) are printed sideways so as avoid loosing detail in the gutter when printing across a spread. This is also one of the very few books of this type to include an actual chapter on how photographs are turned into dimensioned drawings and how overlays are derived at and corrected for perspective.

Because it is to be expected that a reader will study the drawings with rapt attention, one snafu ought to be pointed out. A side view of a Fiat CR.32 on p. 98 is accompanied on the next page by a top view. At first glance it looks like the identical aircraft—except that only the top view shows yellow banding behind the cockpit. That aircraft is actually shown a few pages later (102) and the top view from p. 99 is used here again, at a smaller size—but now the trailing edge of the right wing doesn’t match the left! Always somethin’ . . . but what a minor glitch this is.

It is worth noting that the English translation was done by author Bernád and, for once, reads uncommonly well. (Those 15 years in Canada must have helped!) Appended are details about the structure of the Hungarian Air Force and its squadrons, approximate rank equivalents, and types flown.

Pick a superlative and apply it to this book, it’ll stick. Also superlative are the production values found in most of the titles in this publisher’s “White Series”: heavy paper, hardcover binding, good photo reproduction. Substantial in every way (including . . . price, at least in USD).

Ok so there is one thing to gripe about: these books are a set; they’ll be side by the side in the bookcase. The printing on the spines does not align—totally minor, but also totally avoidable!

Danish Painting, From the Golden Age to the Modern Breakthrough »
« Bleeding Edge