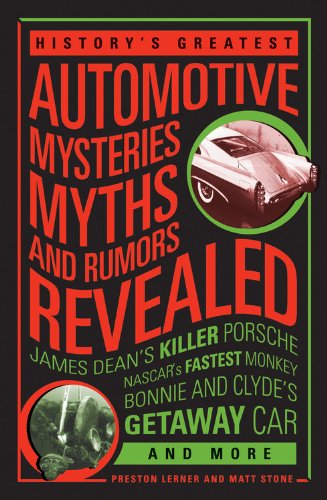 by Preston Lerner and Matt Stone

If you can make learned pronouncements about “the Utopian Turtletop” or know the afterlife of James Dean’s wrecked Porsche, write your own book. If you can’t, read this one.

On more than a few occasions I have heard someone say, usually rather wistfully, that they would really like to write a book about the many myths and mysteries of automotive lore. The last time I heard this was only a few months ago when Donald Davidson, the noted historian of the Indianapolis Motor Speedway, brought it up in a discussion we were having regarding a particular racing myth. Well, noted automotive journalists Preston Lerner and Matt Stone have now actually produced such a book. And, it is quite a book! That the authors borrow the philosophy of the great movie The Man Who Shot Liberty Valance and run with it only adds to the attraction of the book.

Covering the gamut from urban legends to crime, racing, Hollywood, death, and “inside the industry,” the duo tackles one automotive myth or mystery after another, 25 in all, divided into six categories. The topics addressed cover whether or not Steve McQueen did his own stunts for the movie Bullitt, to Jocko Flocko (if you have to ask . . . there’s a reason right there to get the book!), to the rocket car and the mountain, to the 1959 Chevy (really!), to the shores of Tripoli—well, actually, to the story of the 1933 Gran Premio di Tripoli. Each story ends with a “verdict”—kind of like the Myth Busters TV show—and a summary statement.

I found the book to be rather a fascinating blend of the relatively sane (the racing section in particular) to the absurd (several choices on that front). I will admit that several of the topics covered were new to me, while several of the others I was quite familiar with. Each specific topic is usually covered in a few pages and, I am pleased to note, the stories are well-written. This is one of those books you probably won’t read cover to cover but selectively—and it can be picked up and put down time and again without getting stale. It is also the sort of book that the general reader can find enjoyable. In other words, this is just the sort of book that makes a great gift that is sure to please, which is about as good a recommendation as I can imagine.

While I will leave it to you to discover the details (see pages 92–101, especially 100 and 101), one of the great pleasures of this book for me is seeing Betty Sheldon receive the credit she fully and justifiably deserves for being right when pretty much everyone else was not only wrong, but dead wrong. That alone, even if only a very small part of this book, made it a pleasure and delight. Lerner is to be commended for giving credit where credit is long overdue.

If you have the urge to pick an argument with the authors over their rulings, check the Bibliography first. They did hit the books and didn’t just “make stuff up”! There’s even a surprisingly deep Index. Only 25 cases are tackled here and there are many, many more. Much like Motorbooks’ In the Barn series, this topic could easily lead to several more installments.