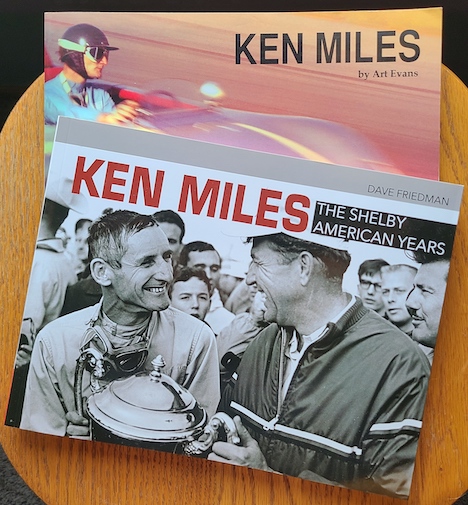 Two photo books profile race driver Ken Miles from two perspectives. Born in 1918 he raced competitively from 1946 to 1966. The Evans book was published in 2004; it uses a broad brush approach to relate Miles’ life and career. The Friedman book was published in 2021; it focuses (and yes, there’s a pun in there) specifically on Miles’ years with Carroll Shelby starting in 1963 and thus is subtitled The Shelby American Years.

Pages from the Evans book show Ken in 1956 going for a class record at Bonneville in an MG-powered experimental.

Miles was one of those race car drivers who practically became legendary before he truly was. Born and raised in the UK, he spotted the lass he wanted to wed when he was but 15 years old. They had a son they named Peter. While Peter was a young lad, the family emigrated to America as that was where the race car driving that attracted Ken was the most prevalent and offered him greatest career opportunities. And so the legend began . . .

The Evans book commences its coverage of “The Shelby Years” on page 90 with images of Ken and Carroll illustrating Shelby’s words about Miles.

The older book titled Ken Miles was assembled by Art Evans, a fellow road racer in the day who was also one of racing’s chronologists both in words and, being an adept photographer, in images. He published his book on Miles with his own Photo Data Research, LLC in 2004. An internet search shows that it is still readily available. 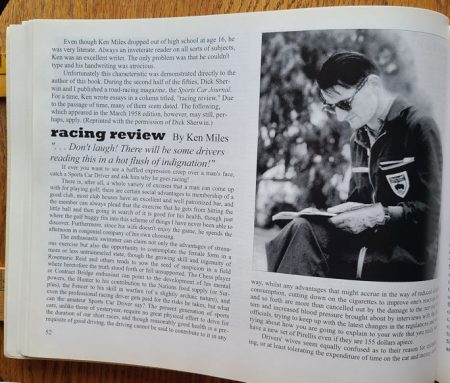 Miles was a prodigious writer himself and wrote essays for Sports Car Journal as this page in Evans’ book shows.

Evans did write some of the text about Miles but he also solicited and incorporates the thoughts and memories of many of Miles’ contemporaries as well as Ken’s widow Mollie and their son Peter too. It is an effective approach especially when those “others” include the likes of team owner and friend Carroll Shelby, Miles’ crew chief and friend Charlie Agapiou, and others.

Friedman was the Shelby team’s official photographer. The idea for his Ken Miles book emerged while examining in his archive proof sheets of images taken over the years he had worked for Shelby, first as a contractor, then full time. As the in-house photographer he got to know and form friendships with those who worked there, which, in turn, enabled him to caption each of the 350 images he selected and arranged chronologically in a particularly insightful way.

From W. Lee Tomerlin writing in the Evans book we learn of “Ken’s penchant for tea [likely stemming from the fact] his father and grandfather [were] owners of the Henry Miles tea importing-exporting-blending firm.” Then there’s this as Tomerlin quotes Ken’s philosophy: “A machine is inflexible by nature, and can’t change its method of defense. And when it acts stubborn—which is nearly always—all a man has to do is change his method of attack, which, being flexible, he is able to do.”

From Friedman there are memories of his and Ken’s “late evening chats in his [Ken’s] office while gluing up those awful homologation papers. His love of classical music filled the room and offered a bit of well-deserved downtime.” Or of the shop’s “weekly homemade chili lunch meetings.” Further, Friedman notes “Ken loved the kids and always spent plenty of time with them” particularly at races.

Friedman images taken at 1966 Daytona. Miles in the #98 Ford GT he and Carroll Shelby and team had developed.

Ken wore multiple hats at Shelby American under his job title of Competition Manager. He was “assigned to development of driver environment inside the cockpit and handling.” He “supervise[d] testing” even as he was also the main test driver. And he was the lead race pilot. Oh, and he was responsible for overseeing development of the Cobra coupe working with Pete Brock, Phil Remington and, of course, Shel.

Sadly auto racing doesn’t always display the better sides of human behavior. Ken got caught up in such a situation in 1966 at the 24 Hours of Le Mans. As Tim Considine writes in his epic Twice Around the Clock, The Yanks at Le Mans it was “the most controversial finish in the history of Le Mans.” Later he adds, “The controversy around the arranged finish will never be resolved.” Both Evans and Friedman bluntly express their opinions that the race win was stolen from Miles denying him what would have been the historic sweep of that year’s endurance races: Daytona, Sebring, Le Mans.

Together or individually, these books pay tribute to Ken Miles as they show and tell of the caliber of man and racer that he was. That said, as there is virtually no overlap or redundancy in what each book presents, if you truly want to see, read of, and learn of Ken Miles, the man, his racing prowess and career, you’d benefit from reading both.