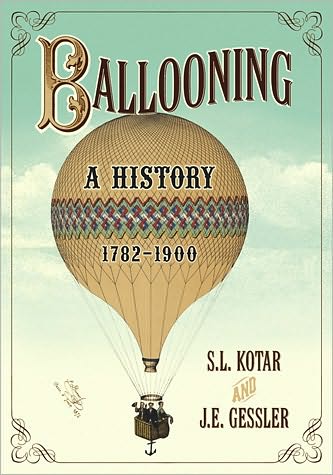 Years after Brazilian airship pioneer Alberto Santos-Dumont took his first flight in a balloon in 1897 he voiced the opinion that the view of the earth from above had the power to so humble people that, mindful of their own small place on the planet, they would want to lead more just and moral lives, culminating in world peace. Ballooning by then was already a century old—had he forgotten that it had only been 10 years after the first repeatable ascents in 1783 that Napoleon used balloons in his protracted war against much of Europe?

To impress upon the 21st century reader the impact early “aerostatic machines” had on the popular and the scientific imagination in its day, the authors liken it to the moon landings of the modern era. One is not surprised to learn that the people of Santos-Dumont’s generation thought of the balloon era as not only a distraction but actually an impediment to the advancement of powered flight. What is more surprising is that newspaper clippings from the 1820s reproduced here show that already then the promise ballooning held was wearing thin (“ Slender indeed have been the additions made to science.”)

It is, in fact, these contemporary accounts that are the primary appeal of this book. It must be said that the literature on this subject is rather vast, ranging from the staunchly academic to utter fluff. This book is a very approachable, general-interest-level text with a focus on the human angle. The key to it may well lie in the last sentence of the Preface: “We hope this book kindles the imagination and instills the sense of awe and adventure we felt in writing it.”

Kotar and Gessler seem to have stumbled upon this subject by accident, in the form of a news story from the 1800s that sparked their curiosity which they satisfied by looking for more and more of the same. They are, in other words, not experts in this field but discoverers in much the same way many readers of this book will be.

The authors paint a richly colorful picture of the aeronauts’ hopes and fears, successes and failures and the place they occupied in society. Readers familiar with the history of ballooning would not be wrong in saying that the painting is done with too broad a brush—but the authors did not intend to write that kind of a book. Their approach is to look at ballooning though eyewitness and contemporary accounts, within the context of popular culture rather than science.

Beginning with Chinese kites in 400 B.C. the first chapter is a crash course in man’s various attempts to get things airborne and keep them aloft and devise means of achieving controlled motion. The remainder of the book traces in more or less chronological order (balloons may not have moved fast but the theory did so there is much overlap here in terms of concurrent developments) the spread of aerostation from France (it is not explained why it started here) throughout Europe and then America. The many excerpts and quotes are all referenced in Chapter Notes at the back of the book—and manifest one example of the aforementioned “broad brush” approach: the number of American sources is greater than, for instance, the British ones, which is not at all proportionate to the depth or quality of each country’s contributions.

In terms of writing craft, the storytelling-style is different enough to call for an explanation. Kotar and Gessler are a writing team that is rooted in various genres of fiction, from screenplays to Westerns, science fiction, horror and psychological novels. Add a dose of Civil War and baseball, not to forget steamships and running several celebrity websites, and you see why wordsmithing sometimes wins out over precise but potentially boring prose.

We always extol the virtues of reading every part of a book. In this case we also need to say that if you read the Preface, don’t loose confidence! Unlike book jacket or back cover blurbs that are not usually written by the author/s, the Preface is their opportunity to shine and make a—good—first impression and win over the reader. This Preface is an example how not to do it. Patchwork text that clearly has gone through one too many copy/paste cycles (whole sentences duplicated almost verbatim, pp. 2 and 3), a significant typo (“causalities” when surely “casualties” was the intended word, p. 4), catchy phrases you’ll come across again elsewhere in the book etc.—looks like a rush job to us.

The illustrations are sparse and the reproduction not exactly breathtaking even accounting for their age and poor source material. All are credited. The Bibliography appears to be a list of sources consulted (very many Internet sources, including—gasp—Wikipedia) rather than recommendations for further reading (none of the standard balloon monographs are listed).