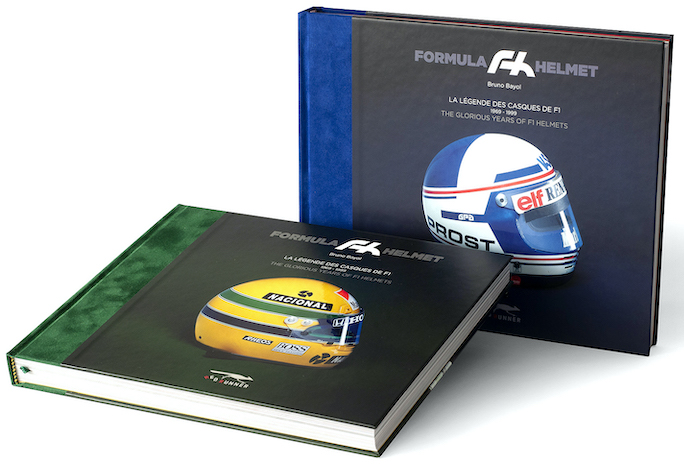 (French, English) Do you like Senna better than Prost? Green better than blue? You’ll have to answer one of those questions before you can order this book.

Why? Because the same book exists in two versions, with identical contents but in different cover colors and designs, which extends to such things as headbands, endpapers, and bookmark ribbons.

Why? Because French publisher RedRunner likes to be different. Not for the sake of novelty but to raise bookmaking to a new level in terms of materials, finishes, and concept so as to engage and delight the reader. RedRunner says they work with the best craftspeople in France, all perfectionists in their fields.

We’re only on the Table of Contents and already we’re having fun!!

And a few pages later the first chapter opener. If you are a designer and know the terror of the blank page, this seemingly simplistic layout is the stuff master classes are made of/for. The use of space, the restraint, the relevance to the topic. Ah, joy.

And as to those two color choices, that’s just for the €85 standard edition. Spring for the €990 Collector Edition and you get 31 custom options (plus a suede slipcase closed with a “chinstrap” as used on a classic Bell XFM-1 helmet, plus other goodies) one for each of the 31 years the book covers. 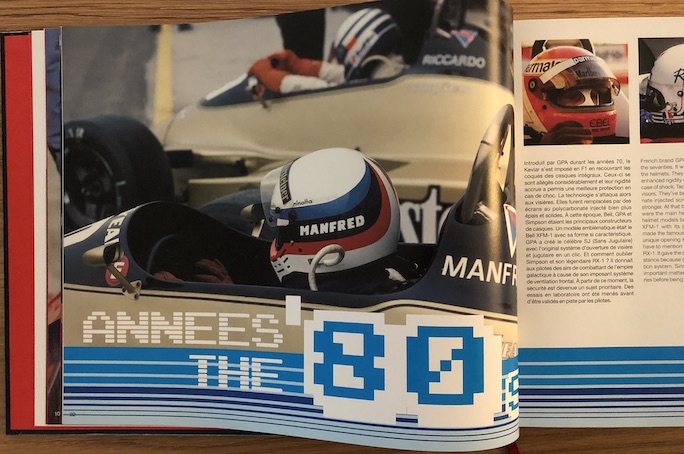 If you know anything about print technology, you’ll look at these books and wonder how anyone can offer this much book for this little money. Consider, for instance, that the helmet visor on the front cover is actually a clear piece of varnish that is overlaid so as to feel 3-dimensional. Only 1480 numbered copies of each version exist. And even that number sticker is a thing of beauty: designed to look like a helmet safety label this is a metallic-looking adhesive sticker on the title page (the book number is on the bottom left):

What, you still want to know what the book is about? Why, casques. Helmets. Lids. Specifically full-face helmets (the reason the Collector Edition’s box is a nod to the XFM-1 is that it was Bells’ first carbon composite and the first to have a fire retardant interior). This book is primarily about such things as helmet design (from the graphics and, only peripherally, the technical standpoint) and team/driver preferences, and not about structural or manufacturing matters.

The story is presented mainly in the form of hundreds of photos from various sources. Bayol is a graphic designer with motorsports interests—and it is thanks to his connections to collectors that so many helmets could be photographed (or examined and then drawn) specifically for this book which would have been utterly generic otherwise.

The book is divided into 5 chapters: Evolution (a brief romp through the decades), Hommage (features of drivers in what appears to be subjective order, except—provided you have mental picture of racing history—you quickly get the sense that it is not random when you see, say, Villeneuve being followed by Pironi, or Mansell by Piquet), Design (painters and technicians like Pierre Vangin, Doug Eyre, Mike Fairholme, Sid Mosca), Marques (helmet makers), and Champions (all the helmets used by 17 individuals over their careers, here the bottom photo).

If you think a book full of pictures of helmets is frivolous, consider how many people who clearly have bigger and better things to do than write little essays for a book did just that—think drivers like Henry Pescarolo, Jodi Scheckter, Carlos Reutemann, Mikka Häkkinen to name a few. No surprise that the Foreword is by F1 icon Jackie Stewart who was an early safety champion. He relates that helmets aren’t merely about crash protection: until a doctor told him so, he had no idea that his hearing loss was not due to engine/exhaust noise but the frequency of the air rushing by his open-face lids. The Epilogue is by French driver Philippe Streiff who had 55 F1 starts between 1984 and 1988 before a crash in a pre-season test left him a quadriplegic.

If you know your drivers you know whose helmets these are without even seeing their names.

The last page says in big letters: To be continued . . . Here’s hoping!

Won “Most Beautiful Book” at the 36th Festival Automobile International in 2021.

If you have a book in you and want it to look special, RedRunner does contract design and production.