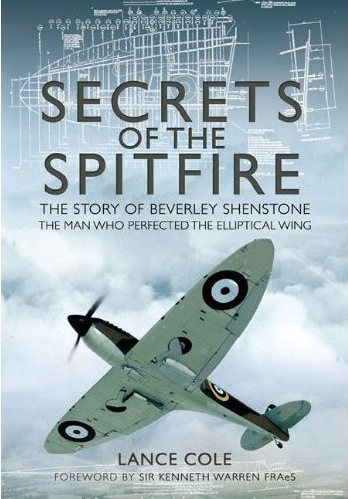 Lance Cole’s extraordinary book examines a part of the Spitfire story that is both important and, more importantly, has not been covered before. This famous British fighter plane owes its remarkable and unique performance to a bright young Canadian aeronautical engineer who, having been identified as an up and coming graduate at the University of Toronto, went to work in Germany at a time when its aircraft industry was making huge strides and getting ready for World War II. Beverley Shenstone’s time in Germany was serendipitous because being in the right place at the right time enabled him to work on the Junkers production line and so gain the very necessary hands-on experience of building aeroplanes.

Cole being both a glider pilot and a trained designer gives him a most suitable vantage point from which to examine Shenstone’s interests and achievements. Shenstone, who had trained as an RCAF pilot, also took up gliding which familiarized him with flight behaviors that would prove crucial to his later designs for the Spitfire. Germany, shackled by the Treaty of Versailles having effectively banned powered flight post-World War I, had made  gliding a national sport and German gliders the best in the world. Interestingly, Germany lobbied very hard, but unsuccessfully, to have gliding included as one of the official sports at the infamous 1936 Olympic Games. It is thus uniquely relevant that this particular interest of Shenstone’s brought him to Germany’s gliding center, Wasserkuppe, where he met a man who was to have a profound influence on his subsequent career: Alexander Lippisch, the brilliant German aerodynamicist who perfected the tailless delta wing and whose work made the extraordinary Me 163 high-speed rocket-powered interceptor a viable project. Shenstone worked alongside Lippisch, absorbing much fact and inspiration. Cole correctly suggests that Shenstone being a Canadian citizen made his presence politically acceptable in the highly sensitive aviation environment of Nazi Germany.

The main thrust of this excellent book is the story of how Shenstone was recruited by the Chief Designer of Vickers Supermarine R.J. Mitchell in the early 1930s and how Shenstone’s fascination with the science of aerodynamics led to his design of a very advanced and unique elliptical wing that enabled the Spitfire to outperform both the Hurricane and Me 109 fighters. Cole’s exposition should lay to rest once and for all the myth that Mitchell lifted the idea for the Spitfire’s elliptical wing from the German Heinkel He 70. It also clearly establishes just how much of a team effort the Spitfire design was and remained throughout the years. The extraordinary performance of the low-drag wing designed in 1935 was critically important five years later during the Battle of Britain. By 1945, versions of the Spitfire with this Shenstone wing (and a number of other mods by his hand) were achieving speeds as high as Mach .92!

After his time with Vickers Supermarine, inevitably Shenstone was moving up on his career path. He mixed with the mighty at the all-important August 1941 meeting of Prime Minister Churchill and President Roosevelt at Newfoundland and the following year saw him based at the top US aviation research establishment at Wright Patterson airfield in Ohio.

After returning to Canada for a time, post-war Shenstone and his wife crossed the Atlantic to return to a very austere Britain where he took up the position of Chief Engineer at British European Airways. Over the years he held high offices—technical director at BOAC, consultant to several aircraft makers, President of the Royal Aeronautical Society—and was courted by Avro, de Havilland, and Vickers. His early days in the nationalized airline business reflect a sad story of highly competent engineers and administrators trying to fight off incompetent political interference from the socialist Attlee government.  However BEA’s enthusiasm for and the development of the Vickers Viscount into a world-beating airliner is a happier story but the airline’s obsession with turboprops led to the unfortunate Vanguard debacle. When BEA finally accepted the benefits of the jet engine, the potentially world-class de Havilland 121 trijet airliner was ruined by the airline’s obsession with imperfect future traffic analysis data.

Based on Shenstone family documents and his unpublished autobiography this very readable book (a basic understanding of aerodynamics—and also general Spitfire history—will help!) concludes with his post-retirement activities that include his fascination with and support of man-powered flight projects, including the creation of the Kremer Prize.

Many of the photos are Shenstone’s own and thus new to the record, especially the Type 224 pre-Spitfire prototype. There are no technical drawings which, considering the subject matter, is surprising. The book includes comprehensive chapter notes. The Appendix relates to Shenstone’s articles, papers, letters, and lectures and the Bibliography includes references to personal interviews. The index is quite detailed.

Journalist Lance Cole is no newcomer to aviation authorship and has published several books and numerous articles. His print and broadcast work is syndicated worldwide. Car folks will recognize him as a long-time contributor to Saab message boards and author of several books about that marque.

A Ribbon of Road in the Moonlight »
« Bugatti: A Hundred Years of Innovations and Excellence (1909–2009)