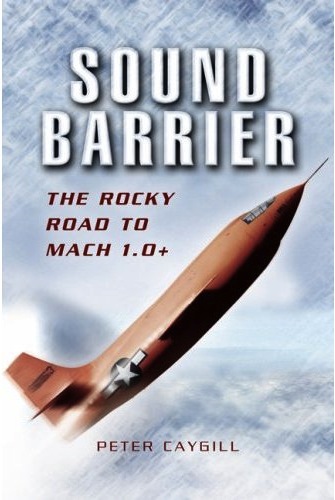 It’s always a pleasure to read a well-written book, particularly when it clarifies a topic that, for me at least, had been shrouded in the misty vapor captured in photos of airplanes breaking through the sound barrier. The book’s dust jacket does just that, showing shock wave-generated condensation flowing off the wings while a halo of mist surrounds the tail of the 1947 Bell X-1 as it breaks through the sound barrier for the first time.

The author shows the reader 60 excellent aircraft photos and gives a historic description of each plane, starting with the surprisingly aerodynamic 1913 mono-wing Deperdussin racer (126 mph), the beautifully sculpted 1923 Curtiss R2C-1 (267 mph), the 1931 Supermarine (379 mph), continuing through the German and Allied jet- and rocket-powered craft produced during World War II. After the Bell X-1 officially breaks the barrier in 1947 the author’s momentum carries us up into the 1950s, showing us the French, Russian, British, and American aircraft that moved the speed needle past 1,000 mph.

I understand what the speed of sound is and how it works, but I was ignorant about exactly what happens between an airframe and the surrounding atmosphere when approaching Mach 1. I’d read and heard stories about the “buffeting,” vibration, reversal, and locked-up controls experienced by World War II pilots during high-speed dives as they approached critical Mach numbers. How that buffeting and vibration was caused is explained, and how it was eventually managed using such concepts as the “area rule” is laid out clearly. The author’s explanation of laminar flow and critical Mach numbers for various parts of the aircraft, versus the Mach number for the aircraft as a whole, is well done. Caygill describes the science in such a way that you understand what he’s describing without having to work at it. He carries you effortlessly through the technology, allowing you to understand nuances that most people don’t even know exist. Fascinating stuff!

Another excellent aspect of this book are the descriptions taken from eyewitness and test pilot reports about the problems they encountered as the speeds climbed ever higher. In particular, the eyewitness descriptions of the death of Geoffrey de Havilland, Jr. when his DH.108 disintegrated in 1946 at approximately 650 mph are enlightening. Similarly, the test pilot logs for the Spitfire, P-51 Mustang, and P-47 Thunderbolt tell a tale of trial and error as wrinkled aluminum surface skin, cracked radiators, and broken hydraulic lines all had to be addressed before the planes became successful.

Caygill does not spare the rod in chastising the British government for losing their momentum immediately after World War II, allowing the Russians, the US, and even the French to best them in aircraft designed for speed. As he bluntly puts it, history “shows what damage was caused to the UK aviation industry by the deluded thinking of certain politicians, aided and abetted by several high-ranking RAF officers who should have known better.” Well, no free drinks for Caygill in Whitehall, one suspects.

Discussed, but not pictured, are the early jet engines designed by Frank Whittle, Frank Halford of de Havilland, Rolls-Royce, Rover, Dr. A.A. Griffiths, Hayne Constant, General Electric, Westinghouse, and von Ohain, Heinkel, BMW, and Junkers in Germany. Also discussed are the early ram-jets and rocket motors installed by all sides into advanced airframes in the quest for higher speed. The lack of photos of all these engines is regrettable but understandable. In a spare-no-expense reprint I’d like to see more photos of everything Caygill describes. The book would end up twice as large and three times as expensive, but, wow, what a book it would be! Until that happens, this book is the best I’ve ever read on the history leading up to and surrounding the breaking of the sound barrier.

Although the pictures are grouped together in a center section of the book, it’s not difficult to flip back and forth between the pictures and the text to keep abreast of what is being described. Naturally, it would be better if the photos were placed next to the text describing each particular plane, but that would require a lot more photos to avoid using the same photo over and over as each plane type makes many appearances throughout the book.

For me, something I had long suspected but had never seen stated as clearly as Caygill is able to do, is that during World War II the Germans had more technologically advanced airframes than the Allies, but the Allies had jet engines with higher reliability. Had Germany been able to manufacture jet engine turbine blades out of nickel and the other alloys necessary to withstand elevated combustion temperatures, the air war over the continent would have forced the use of jet aircraft by both sides. The outcome would have remained the same, but the time frame might have stretched out as the Allies retooled their massive production output to produce jet aircraft instead of propeller-driven planes. As it was, in 1945 the US was training jet support personnel to help finish the war in the Pacific. Jets were obviously the wave of the future.

The book consists of a Table of Contents, an Introduction, 15 Chapters, a necessary Glossary to keep up with constant references to AFDUs, ETPS, IMNs and 34 other acronyms, an interesting Bibliography I plan on raiding for future reading, and an Index

In addition to this work, Caygill has written several other books dealing with aircraft from the same general time period. If this book is typical of his work, they’re probably all worth taking a look at.