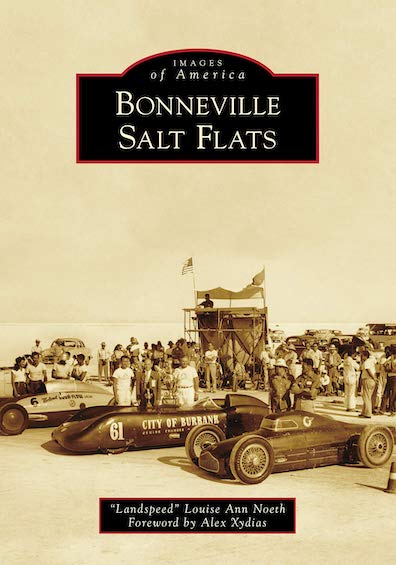 If you’ve ever been to Utah’s salt flats or any similar typography on this earth, you know that reaction of awe it engenders. Couple that terrain with the sounds and smells of the machines with which men and women are challenging themselves with their vehicles to achieve ever greater straight-line speeds. It’s the stuff of legends.

This modest, in size and price, book celebrates with pictures, accompanied by carefully worded captions, the Bonneville salt flats. Describing the book as “modest” is absolutely not a derogative or critical observation. In a time when so many automotive-oriented titles are being printed in ever larger format with commensurately increasing costs, this 9.25 x 6.5″ softcover has much to offer on its 128 pages for there are over 200 images, all clearly and well presented. Best, or better yet, it won’t drain your pocketbook or wallet.

Some reading this may already be familiar with the photo-history books published by Arcadia Press. If, however, you are not, do take a bit of time to explore this publisher’s website, especially the breadth and depth of the listings under the Subjects tab on the top toolbar. 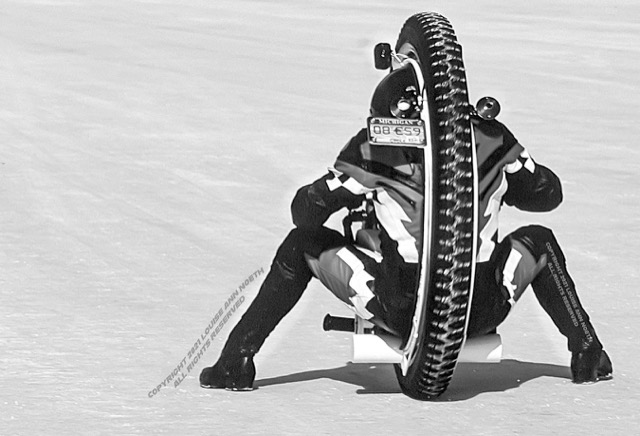 The jaw-dropping 4′ in diameter monowheel powered by a 40 hp snowmobile engine (above) and the enormous Phoenix powered by a V-16 diesel fitted with four turbochargers and two superchargers gives testament to the diversity of machines seen on Bonneville’s salt flats. Top speed for the monowheel, 53 mph. Phoenix set a record at 272 mph. (Both images courtesy LandSpeed Louise) 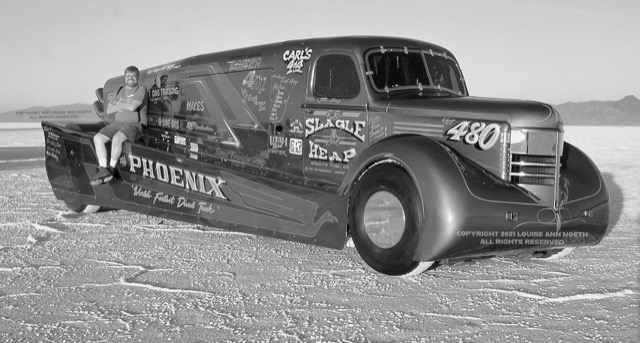 Author Louise Ann Noeth has been fascinated with and by salt flat and dry lakes racing for practically her entire life. As adept with wordsmithing as she is manipulating her cameras, she’s been recording activity at Bonneville for decades. In this book she’s assembled historic photos—and some original artwork—for which she’s written pithy caption comments and chapter introductions.

The chapters are essentially chronological with a few “interruptions” to cover the diversity of Bonneville participants, the physical/geological deterioration of the salt bed documenting its root cause, and firmly establishing that dry lakes racing, particularly at the salt flats is likely one of the last bastions of true sportsmanship. As dedicated as each is to achieving their respective goals, virtually all put helping out another team, even a direct competitor, first and Noeth has the examples to prove it. 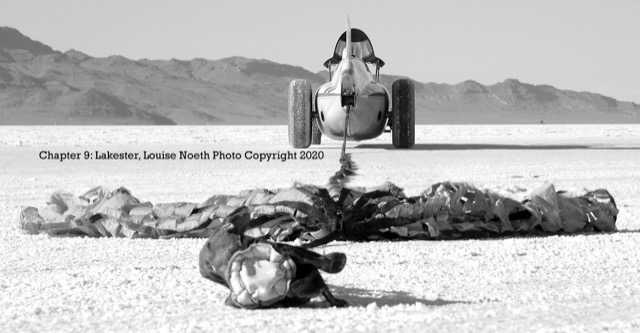 Some salt challengers achieve such speeds that runout room is gone before they can or have slowed sufficiently to risk braking. So, they pack a chute–actually two. The first, a “pop chute” pulls the bigger canopy out as it deploys. This lakester has come to a complete stop after achieving a 302 mph record and is awaiting the pick-up crew thus offering you a good view of the “pop” and the now deflated main shroud. (Photo courtesy LandSpeed Louise)

Likewise, Noeth is quick to assert, no speed meet on the salt takes place without volunteers, at a minimum 50 per event. Numerous of those volunteers have been doing their respective jobs for as much as half a century, often performing those jobs while in between tuning and trimming their own vehicles for runs for a record.

She mentions, and shows one volunteer in particular. Of the gentleman named Bob Higbee she writes: in “more than a half-century of volunteer service, Bob Higbee…was [by 1971] the chief starter. He controlled when each competitor would gain solitary access to the speedway. Every driver and his or her speed machine received his personal safety inspection before getting the signal to go. Racers believe Higbee saved more lives on the starting line than the ambulance crews after a crash.”

Speaking of drivers being in trouble: are you aware how, aside from an outright, visible crash, drivers signaled they needed help? You’ll learn on the pages of this book. Hint; it all depends on which way the driver turns at the end of his/her run—right or left.

As observed at the outset, this is a modest book. But its content—photos and words alike—are far from modest. And that makes this Bonneville Salt Flats book by Louise Ann Noeth an incredibly good value!