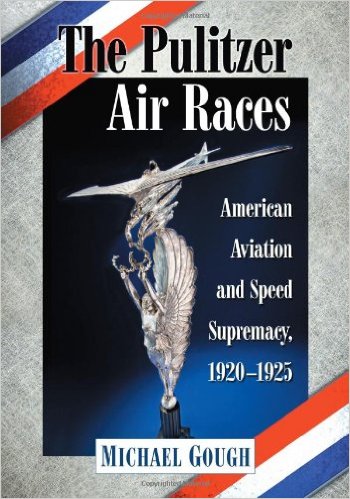 “The Pulitzers, overlooked as they are, lifted American high-speed aviation from humiliation in 1920 to world championship in 1922. In September 1920, three US organizations shipped racers, amid high hopes and hoopla, to France to fly in the Gordon Bennett. None of the three completed a single 100-km lap of the 300-km race. Three years later, the US owned every land-plane speed record, and the records belonged to airplanes developed for the Pulitzers.”

Who doesn’t know the Pulitzer Prize? Except, the one people know, the one for excellence in journalism and the arts, is not the one this book is about, “the perpetual prize for annual closed circuit air races.”

The quote above, and the fact that this is literally the only book to specifically focus on this air race, is really the only thing you need to know to guide your purchase decision. The book is also nicely written, exhaustively researched, and wholly aware of the surrounding literature so it fits like a round peg into a round hole.

If there is one aspect the book does not entirely explain it is why, despite their comprehensive, undeniable immediate success and long-lasting influence the Pulitzer races did not at all become “perpetual” and in fact fell into obscurity over time. Could American organizers and aviation proponents really have been so shortsighted as to think that after six successful races there was nothing left to prove? To be sure, by then American aviation know-how had become a worldwide benchmark, reversing a trend of years if not decades past. In fact, two Pulitzer aircraft pocketed the two US wins at the granddaddy of air races, the Schneider Trophy. And in 1927 Lucky Lindy flew not only himself out of obscurity into eternal fame by zipping nonstop and solo from Long Island to Paris but also put “Made in America” at the top of the leaderboard in long-distance aviation, which, incidentally, had been the Pulitzer’s original purpose.

Gough ably and engagingly explains why that focus instead shifted to closed-circuit racing, threading the needle with a quick summary of the rags to riches story of Joseph P. whose own trajectory from penniless German immigrant to political operator and then newspaper baron had shown him that in America, everything is possible. He, as did so many other civic- (and advertising-) minded newspapermen elsewhere, threw the might of his resources behind projects that made the future bright and shiny. It also set an example for his three sons and heirs who, after his death, set their minds to sponsoring another aviation activity that would expand the envelope, the Pulitzer Air Races.

The races are presented in chronological order in stand-alone chapters. Early on in the book Gough explains his own reasons for having delved into this subject—as so often, a formative childhood experience but in his case it remained on the backburner until his retirement—and it is clear that this work excites him, which is why he is committed to wanting to “share the excitement of discovery with the reader.” The language is vivid, the exposition disciplined (meaning, this is a smallish book and someone has to prioritize what the level of magnification is possible) and, all around, it is a most worthy effort of the sort that makes one hope for more books by this author.

Chapter 9 “Pulitzer Legacies” demonstrates to those readers who heretofore had not concerned themselves with the impact of the Pulitzers just how decisively the goalposts were moved in only a very few years thanks to a visionary and, fundamentally, privateer effort. The latter point is interesting not least because Gough in his autobiographical remarks leaves out one aspect (surely because it is entirely peripheral): he has libertarian sympathies, which means an appreciation of individual judgment and voluntary association, and a healthy skepticism of state/government intervention.

Appended are race stats and aircraft specs, followed by extensive Chapter Notes, a deep Bibliography, and a nicely organized Index.

Ikarus: Busse für die Welt »
« One Off: The Roads, The Races, The Automobiles of Toly Arutunoff