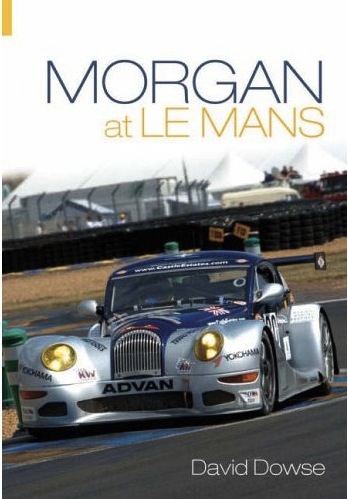 “Pain, frustration, politics, mistakes and corruption are all here. So are some of the remarkable characters who made it all happen and the uplifting joy of overcoming adversity. I have searched myself to answer a question that many friends have asked and that the reader may also pose as the story unfolds: why did I take on the seemingly impossible task of taking Morgan back to Le Mans?”

David Dowse describes the British sportscar maker’s 2002 and 2004 efforts at the 24-hour racing classic as “A minnow in a rather large pond.” Dowse, who was Morgan’s press officer and the manager of the Morgan Works Race Team, has written a book that tells the tale of their epic battle against the odds.

The book begins with a brief mention of Christopher Lawrence’s stunning victory in the 1962 24-Hours of Le Mans. Fans of the marque will already know that Lawrence and his green Morgan Plus 4 sportscar won the 2-liter class in the race after which he drove the very same car back to England. It marked the high point of the company’s competition exploits on the international stage and from that point onward Morgans showed up primarily in club events and later in vintage races.

All that changed in 1996 when the same Christopher Lawrence, now employed as the Chief Development Engineer at Morgan, worked with Charles Morgan, grandson of the founder, to build a competition car to race in the 1996/1997 FIA GT series in Europe. The car competed against Porsches and Ferraris without huge success, but resulted in a working relationship with BMW, the company that would later supply 4.4-liter V-8 engines for the new Morgan Aero 8, launched at the 2000 Geneva Motor Show.

Lawrence had another goal in mind—Le Mans. He set to work producing an endurance racing car, the Aero 8 GTN that would conform to the regulations for the world’s most important sportscar race. Dowse, who had gone to work for Morgan in 2000 as a public relations consultant was put on the project and set to his task finding drivers, assembling a team, and most importantly obtaining sponsorship money. His efforts, the car’s debut at Le Mans and subsequent retirement after 17 hours of racing, are covered in the first four chapters of this perfect-bound paperback book which is filled with good-quality black and white photographs that will stir the heart of any Morgan fan. But the 2002 prelude is really just a taste of the few highs and many lows that the team would face in the 2003 and 2004 seasons.

Dowse had not come from a motorsports background and so was often shocked by what passes for normal business practices and the politics in the world of big-time racing. When Morgan is refused entry in the 2003 Le Mans race by the organizers, it nearly unravels the team. Only through exceptional effort, great strain on his home life, the destruction of his PR business and enormous personal expenditure is Dowse able to keep the team intact and win an entry into the 2004 race.

Ironically, it is just exactly this fighting against the odds and surviving to fight another day that the British, and especially dyed-in-the-wool Morgan fans revere. In the Epilogue to his book, Dowse writes, “But I believe the most important thing we did was to show that anyone, no matter how humble, can do anything they set out to do if only they have the right motivation, enough faith and big open hearts.” How very British. Buy the book. The occasional rough spots in Dowse’s writing of this David versus Goliath tale are more than made up for by the passion, spirit and utter insanity that racing a Morgan at Le Mans embodies.

Equations of Motion: Adventure, Risk and Innovation »
« The Man Who Supercharged Bond: The Extraordinary Story of Charles Amherst Villiers