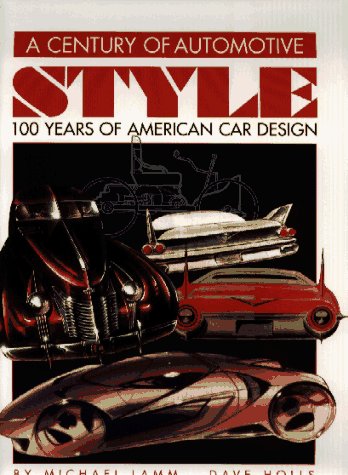 The book debuted in 1996 as a hardbound and garnered raves from everywhere and everyone including magazines as prestigious as Scientific American and The New Yorker. The automotive media heaped on still more praise, exemplified by this written by Paul Lienert in Automobile Magazine, “Authors Lamm and Holls provide the big picture…the most ambitious and comprehensive look yet at this side of the auto business.”

Thus, no surprise the first printing sold out quickly, as did a second printing. In 2002 publisher Lamm-Morada issued a softcover version. These too sold, quickly going o/p. So, on the chance that you didn’t purchase either of the print editions and don’t wish to pay the prices they are selling for on the collectibles market, you will be glad to know that earlier this year (2009) Lamm-Morada reissued the entire book as a searchable DVD. And it is all there, not a single word or photo is missing. The only difference, you can’t sit in your armchair turning pages…this form requires you either sit at your computer, or with your laptop in your lap, in order to see and read.

On the chance that this is the first you’ve known about this book—that it’s all brand new news to you—you may not be familiar with the co-authors. Dave Holls was a professional designer, employed his entire 39-year career at General Motors. At the time of his retirement, he had risen to the number two man at GM Design with the official title Director of Design. But more than merely a working designer, Holls was a life-long student of design, maintaining voluminous personal files and photos on design and design history. Mike Lamm, co-founder and first editor of Special Interest Autos, is the author of many books. He is known and respected for his carefully researched and very readable prose. Together Lamm and Holls covered in detail, that amazed even the most knowledgeable, the story and history of the automobile in America in their seminal work A Century of Automotive Style; 100 Years of American Car Design.

If it weren’t so cumbersome the title of this book really should have been Over a Century of…because that 100 years of the subtitle actually begins in 1892, carries through the entire 20th century, and projects itself into the 21st. The narrative of the history includes: independents such as A-C-D, Packard, etc; those we came to refer to as the Big Three (once they came into being, that is); the smaller, but hugely influential coachbuilders like LeBaron, Dietrich, Walter M Murphy, etc; and with sidebars covering a myriad of design-related topics such as the origins of clay modeling, scrimming, the innovation of styling bridges, profiles of some particularly influential individuals, and so much more. There’s an extensive glossary so no reader can ever become lost or confused by any design-specific terminology.

No reference library, worthy of being called such, can or should be without this book, be it printed on paper and bound, or as the searchable DVD. Of equal relevance is just how eminently readable the entire book is, in no way “merely a dry reference”. Once you start reading, you are loathe to set it aside until you’ve read it all, and looked carefully at every photo on each and every (paper or electronic) page.