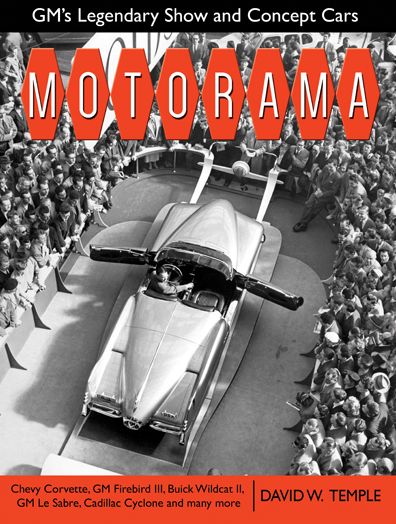 “From 1949 to 1961, this iconic show unveiled these exciting models that defined an era, design, styles, and a vision of the future. Nothing like it existed before or since.”

TV killed the Motorama! There you have it.

No matter how often the terms get used as if they are interchangeable, not every GM show or concept or dream car is a Motorama car. Evolved from the invitation-only GM Industrialist Luncheons, the firm’s product showcases of the 1930s, the Motorama was specifically a traveling road show along the lines of the stationary Futuramas at the World’s Fairs or the firm’s own auto shows, the Transpiration Unlimited and Mid-Century Motorama. Strictly speaking, in theory and mostly in practice Motorama cars appeared only at Motoramas. And that’s what this book is about.

If the book title and its author ring a bell it is because Temple did indeed write a book on this subject in 2006, GM’s Motorama. He was then and is even more so now an acknowledged expert on this topic, having first dealt with it in the form of a multi-part 2003 magazine article (Car Collector, “Fate Unknown”). When even someone like a Joe Bortz who happens to own the largest number of privately owned Motorama cars says he didn’t know how much he didn’t know until he read the book and considers it the best yet written on the subject, take that as the strongest possible endorsement. 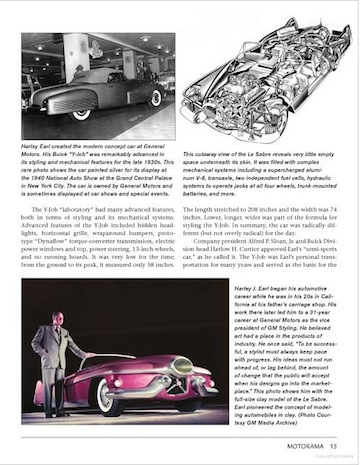 If you already have the older book, consider these words from the author: “There are some surprises awaiting readers of this book, especially for those who read my first one on the subject.” You have to look no further than comparing Appendix A in each book to note that half the entries or more for the 39 known Motorama have different data in the “Status” and even “Number Built” columns. Considering that these cars were meant to be scrapped and only by happenstance or subterfuge managed to survive, even if only in junkyards run by folks who simply didn’t have the heart to crush them, it is no wonder that information about their trajectories is vague, conflicting, and often enough an educated guess. In other words, this second book may not remain the last word either although Temple does think that whatever is not known by now “is likely lost forever.” Also, Appendix B in the new book now includes Motorama dates and locations for Canada as well.

In both books Temple tries to impress upon the reader that the Motorama cars are too often presented as merely styling exercises with no or minimal running gear when in reality all the known show cars did have an engine and many of them were or became more or less fully operable. 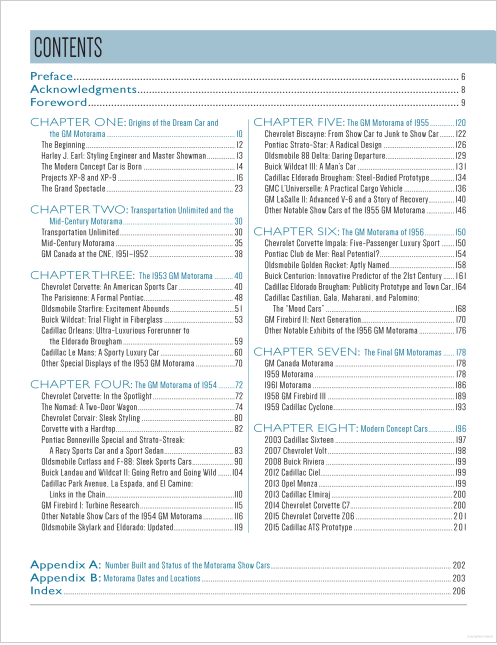 The new book arranges the information in chronological order whereas the previous one was by GM division. While this makes a direct comparison laborious, it is safe to say that a good number of the images are new and also expanded to include brochures, ads, and memos etc. Entirely new is the material about the Parade of Progress and the fleet of custom GM Futureliner busses (restored ones have only recently become recognized as high-end multi-million-dollar collectibles on the auction market).

From soup to nuts, everything is covered: how cars were marketed, GM becoming a style leader, the origin and logistics (and ultimate demise) of the Motoramas, the 1953–56 cars in detail, 1958/59 cars in passing, and lastly a look at notable post-2003 concept cars.

To return to the older book one last time: it was done by a different publisher and if you’re into book or communication design it would be instructive to compare colors and layouts to gain an appreciation of their impact and utility.

In historic terms all the cars discussed here were and are important, as is this book. We should be so lucky to see Temple write individual books about each and everyone, especially the ones that were restored because the custom fabrication (novel shapes, then-new materials etc.) they would have required remains a poorly document aspect.