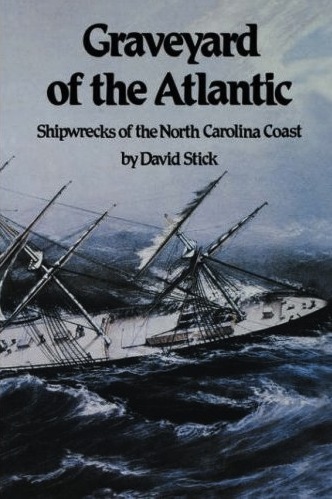 “Graveyard” is no exaggeration: one need only consult the last chapter of the book for a listing of many of the “vessels totally lost” to appreciate just how appropriate the title of the book truly is. Page after page after page of information regarding ships that were lost along just the North Carolina coast. And the list doesn’t even begin in earnest until the 1830s when records began to be kept and ends in 1945.

Graveyard of the Atlantic was originally published in 1952 and then reissued in 1989. (Stick, an Outer Banks resident since 1929 of whom it is said that Amelia Earhart once took him along on her way to the 25th anniversary commemoration of the first flight by the Wright brothers where he, then 8 years old, met Orville, died in 2009.) It is an excellent example of the gifts that university presses provide us, books that might not otherwise see the light of day. In this case, it is an example of the type of book that a university press might keep in print for a long time because it pertains to state or regional history.

This book captured my attention many years ago while I was still a student in high school. Not being very familiar with the various types of sailing ships, the illustration showing a chart of the ship, masts, and rigging impressed me enough to copy it into a notebook and use it whenever I read a book that mentioned sailing ships. It was something of a delight to rediscover the book once again now.

The book is primarily a series of short sketches describing the story and circumstances regarding many of the ships that met their fate somewhere along the North Carolina coast. Most are fairly short, several as short as just a few paragraphs, others a bit longer, but not that much longer, rarely more than a few pages. This means that a reader can dip into the book here or there and then find himself randomly reading about the trawler Anna May, which met its fate in December 1931, or the French bark Emilie, which sank during another December, that of 1845.

While most of the book is devoted to short sketches, the fates of two vessels, the Huron in 1877 and the Metropolis a year later provide the author an opportunity to devote sufficient time to these shipwrecks to establish not only context for the event, but to weave good stories, bringing to light the heroism of those on shore whose duties involved the saving of lives in often extremely hazardous conditions.

My visits to coastal North Carolina were never quite the same after reading Graveyard of the Atlantic. What had once been rather abstract notions about the fate of those ships that encountered misfortune between Wash Woods in the north to the Little River Inlet to the south, literally hundreds and hundreds of them, now had become almost visceral images of what they must really have endured. Even today, it is difficult to gaze out at the North Carolina coast and not have thoughts cross my mind about what ships may have struggled a losing fight against the seas and now lie beneath the very waves I am watching roll in.

This is both an enjoyable book and an informative one, bringing to light an often forgotten aspect of both sea travel as well as the history of a coastal state. I found as interesting to read many decades later as I did upon my first encounter. It is not often that one can say that about a book!

Illustrated by David Stick’s father Frank, a trained artist who had studied at the Chicago Art Institute and drew many covers for Field and Stream and other magazines.

The University of North Carolina Press, 1985

Posted Under: Maritime | Author: Donald Capps | No comments yet

From Supermarine Seafire XVII to Douglas DC-10, A Lifetime of Flight »
« Rolls Royce