My Lifetime in Motorsport 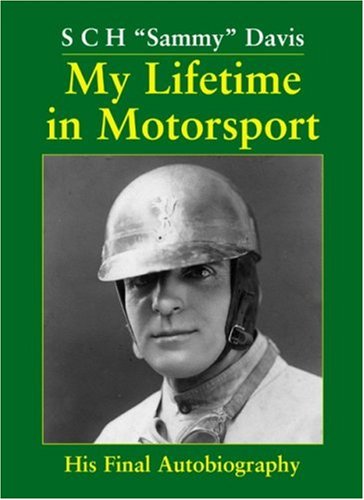 How many autobiographies does a man need??

The subtitle alludes to the fact that this is Sammy/Sydney Davis’ third version. The first two were published in 1932 and 1949. This last one was first submitted, unsuccessfully, in the 1960s for publication when Davis (1887–1981) already was in his Eighties. It remained a work in progress and passed, posthumously, through several custodians until editor Peter Heilbron undertook to edit and illustrate it, as well as append it with supplemental materials.

Among the latter is a transcription of one of Davis’ logbooks that records all his motoring activities in 1913/14, from picnics to races to road tests. Aside from being one of the early Bentley Boys (winning Le Mans in 1927), Davis had a colorful professional and private life that mainly revolved around anything to do with motorbikes and cars.

Belying an unassuming almost nondescript appearance, Davis’ formidable Welsh temper and dry wit could find expression on the racetrack as much as on the page. While being a race driver he also assumed, for several decades, the role of Sports Editor of The Autocar.

One must assume that Davis intended for this third version to supplant the earlier ones but it is not clear in what, if any, way he deemed them deficient or unsatisfactory. At any rate, this version tells the whole story of his life from childhood to old age and everything in between. The writing is largely as he set it down but edited to remove duplication etc. (Despite a career in writing, Davis was dyslectic.)

An Epilogue talks about his son Colin, who wrote the Foreword. Many of the photos have not been published before and there are a large number of Davis’ cartoons. Extensive appendices, Index.

My Lifetime in Motorsport, His Final Autobiography

Go Like Hell: Ford, Ferrari, and Their Battle for Speed and Glory at Le Mans »
« British Buses 1967