The Caped Crusade, Batman and the Rise of Nerd Culture 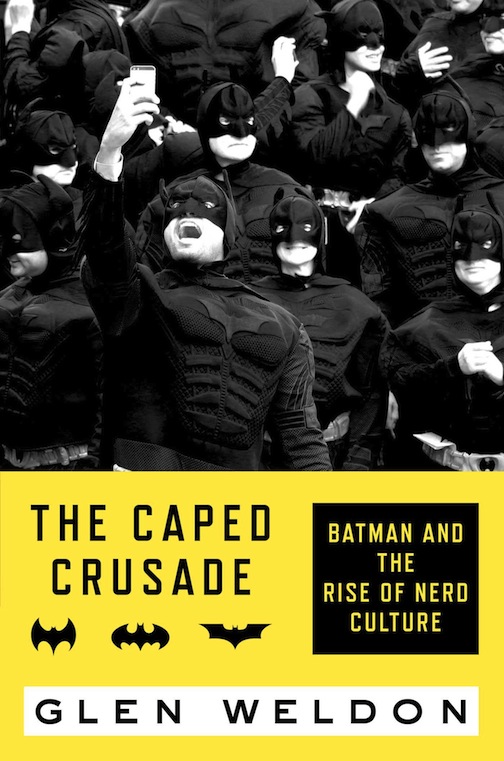 “Many now refer to the [Batman TV] show as ‘tongue-in-cheek’ or ‘winking’ but it was avowedly neither. It was, every frame of it, serious business. That, in fact, was the whole point.”

This year marks the 50th anniversary of that show, as good a time as any for some serious reflection.

Just when you think you have a handle on The Batman; just when you believe you are up on his various costumes and personalities; just when you seem sure of the various multiverses of his existence; just when you feel you have a grasp of the history, the characters and the various continuities; just when you trust your ability to separate which graphic novels fall within or without the continuity—you find in reading Weldon’s book that your Bat-knowledge is negligible at best. And your suspicion that there are Bat-nerds out there who comprehend completely and in great detail The Batman in toto, nerds who take his existence extremely, if not neurotically, seriously, is confirmed. In spades.

Weldon takes us through the history of Bruce Wayne and his alter ego, 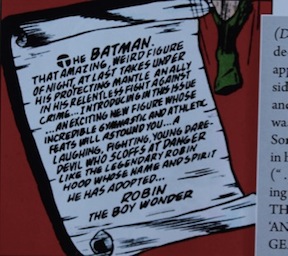 and does this with authority and specificity. That his thesis is also the rise and power of Nerd Culture gives his book a significance that a mere retelling of the Caped Crusader’s complex story, as told in decades of comic books, newspaper comics, TV shows, Saturday serials, animated cartoons, movies and novels, both graphic and prose—and a multitude of works, many scholarly, about the character—would not. He has obviously researched thoroughly, and his in-depth knowledge of this beloved if troubling hero bolsters and refines his research into “the rise of Nerd Culture.” As his work has appeared in The New York Times, The Washington Post, The Atlantic and other respected venues, such level of reporting should not be unexpected.

In this Nerd Culture we find obsession, grave earnestness, turf wars, anger—and love. We learn the names of many of the stars of the movement, but we also are reminded that many Nerds hide their threats, their cowardice, and their nerdishness behind the safety net of online anonymity. And Weldon presents a strong argument that the majority of Bat-Nerds hold a belief that there is really only one true Batman, their Batman, and that is the badass Batman from the 1970s when the character hearkened back to his roots as a nocturnal avenger, a vigilante with attitude. He relates how this belief would surface each time a new movie series would appear, and how much Nerd Culture would influence the decisions made by Warner Brothers when birthing the next batch of films. The Nerds bathed in this power, but were extremely angry when the movies toyed with the true continuity and messed with their Batman. And you can just imagine how they seethed and how they hated the 1960s campy television show starring Adam West. 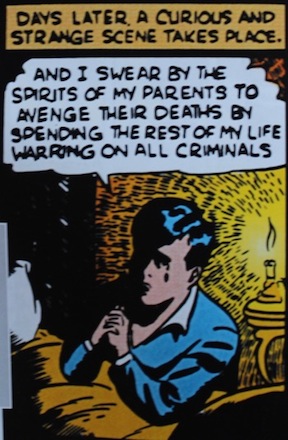 Weldon also weaves a sub-theme that bears consideration. Most Bat-scholars agree that no matter how far afield various continuities, novels and multiverses take him, the incontrovertible foundation of his legend is that The Batman is Bruce Wayne, a billionaire who dresses in a bat-costume and fights crime; that he has no superpowers but is amazingly strong and intelligent; that he lives in Gotham City and fights crime because his parents were shot to death in his presence when he was a boy. Weldon does not refute this, but rather incorporates in all of this the idea that it is the solemn oath that the young Wayne had made by candlelight that becomes the ultimate core of The Batman: “And I swear by the spirits of my parents to avenge their deaths by spending the rest of my life warring on all criminals.” The 1939 panel depicting this solemnity, this “curious and strange scene,” is shown here. This is included in the eight pages of comic art reproduction found in the middle of the book, beginning with The Bat-Man’s first ever appearance and ending with a Capullo-Glapion page from 2012. The artwork is excellently reproduced on glossy paper, the colors both bold and subtle, the images well defined. Also, the front dust jacket photograph is funny, if not a bit unsettling, and the back cover graphic is strong in its simplicity. It is, then, good to see that the overall look and feel of the book matches the strength of the content. Weldon proves that the interest in The Batman remains high and that there is always room for one more perspective, especially one with the power and relevance of this Bat-book.

Batman and the Rise of Nerd Culture

Posted Under: Biography/ Autobiography, Fiction, Other Genres | Author: Bill Wolf | No comments yet

The Cars of Harley Earl »
« Jock Lewes, Co-Founder of the SAS